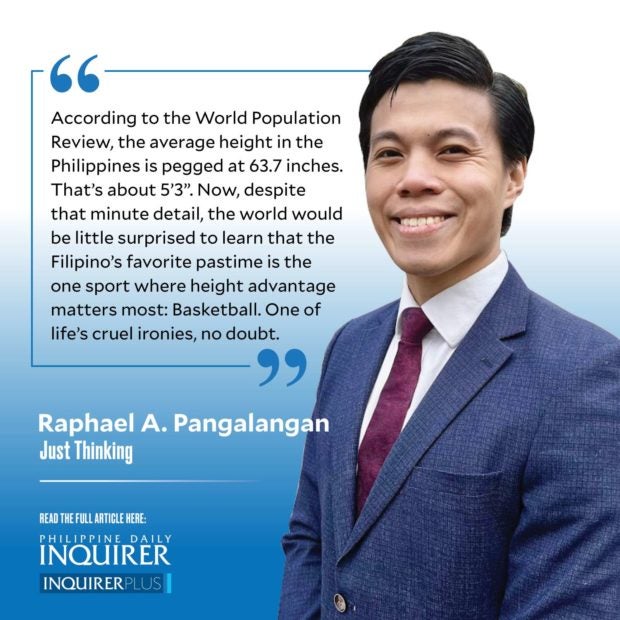 Let’s take a step away from the politics, shall we?

According to the World Population Review, the average height in the Philippines is pegged at 63.7 inches. That’s about 5’3”.

Now, despite that minute detail, the world would be little surprised to learn that the Filipino’s favorite pastime is the one sport where height advantage matters most: Basketball. One of life’s cruel ironies, no doubt.

I’ve often joked that there are three things anyone could find in just about anywhere from Aparri to Jolo: a church, a karaoke machine, and a basketball court. And on the most special of occasions, something magical happens: The holy trinity of Philippine mainstays converge! The roofed basketball court doubles as a “multipurpose hall” for all sorts of festivities, from Masses to sing-along merrymakings. A moment cherished by the neighborhood, albeit to the chagrin of the neighbor next door desperately trying to get some much-deserved shut-eye.

Yet, despite our basketball fanaticism, the recent 31st Southeast Asian Games shows that Filipino talent — that is, “ang galing ng Pilipino” — is not isolated to any single sport. Indeed, while I have always rooted for Team Gilas Pilipinas, which finished second place in this year’s games, my heart also swells for all other Filipino athletes through whom we have bagged an impressive 52 golds, 70 silvers, and 104 bronzes more; totaling up to a whopping 226 medal tally.

In the coming three years, we will have a very real chance to not only continue on the champion’s path but to call on our government to give even greater support for our Filipino athletes and to redefine Philippine athletic culture writ large. Keep in mind: The 32nd SEA Games will take place in Cambodia in May 2023, just one year from the 2022 presidential elections. The 2025 SEA Games will be hosted by Thailand in December 2025 — halfway through the presidential term. In the next three years, the Filipino people will twice have the chance to measure the success of our government, not only in GDPs or credit ratings, but in terms of the quality of athletes we breed. Among them will be dancers and duathletes, wrestlers and runners, gymnasts and judokas — all of whom, mind you, clinched the gold in this year’s SEA Games. We are so much more than just a “basketball nation.” Surely, all of our “atletang Pinoy” deserve so much more too.

But the reformation project does not simply end there.

Before becoming a lawyer, I myself was a student-athlete. I entered college on a varsity scholarship to the University of the Philippines judo team. I look back on those days in awe. I trained on the mats from 5:30 to 8:30 in the morning and then in the gym from 6:00 to 9:00 in the evening, with classes sandwiched somewhere in between. I ended each day with a shadowed bruise and a fiery mat burn, and woke up the following morning to do it all again.

Now slowly sliding deeper into my thirties, I can’t help but smile and think to myself how youth is, indeed, wasted on the young. I don’t quite know how I managed.

I vividly recall my older brother, Gabriel—likewise a black belt judoka and himself a UAAP gold medalist—telling me that this is what being an adult was about. It’s not so much giving up on our ambitions. Rather, it’s about choosing which ones will be made real and which ones will be left as nothing more than dreams.

Suffice it to say, 10 years later, I now write not as sensei but as Attorney Pangalangan. It was a difficult choice largely defined by pragmatics, and in many ways the right one. But I regret that we live in a system where we need to make these choices at all.

Perhaps, we should make space for new dreams. One where success will be equally celebrated in whatever shape or form, whether in a barong, a suit, or a judogi.

But until then, I extend my heartfelt congratulations to the “atletang Pinoy” for many a dream come true. You do your country proud!