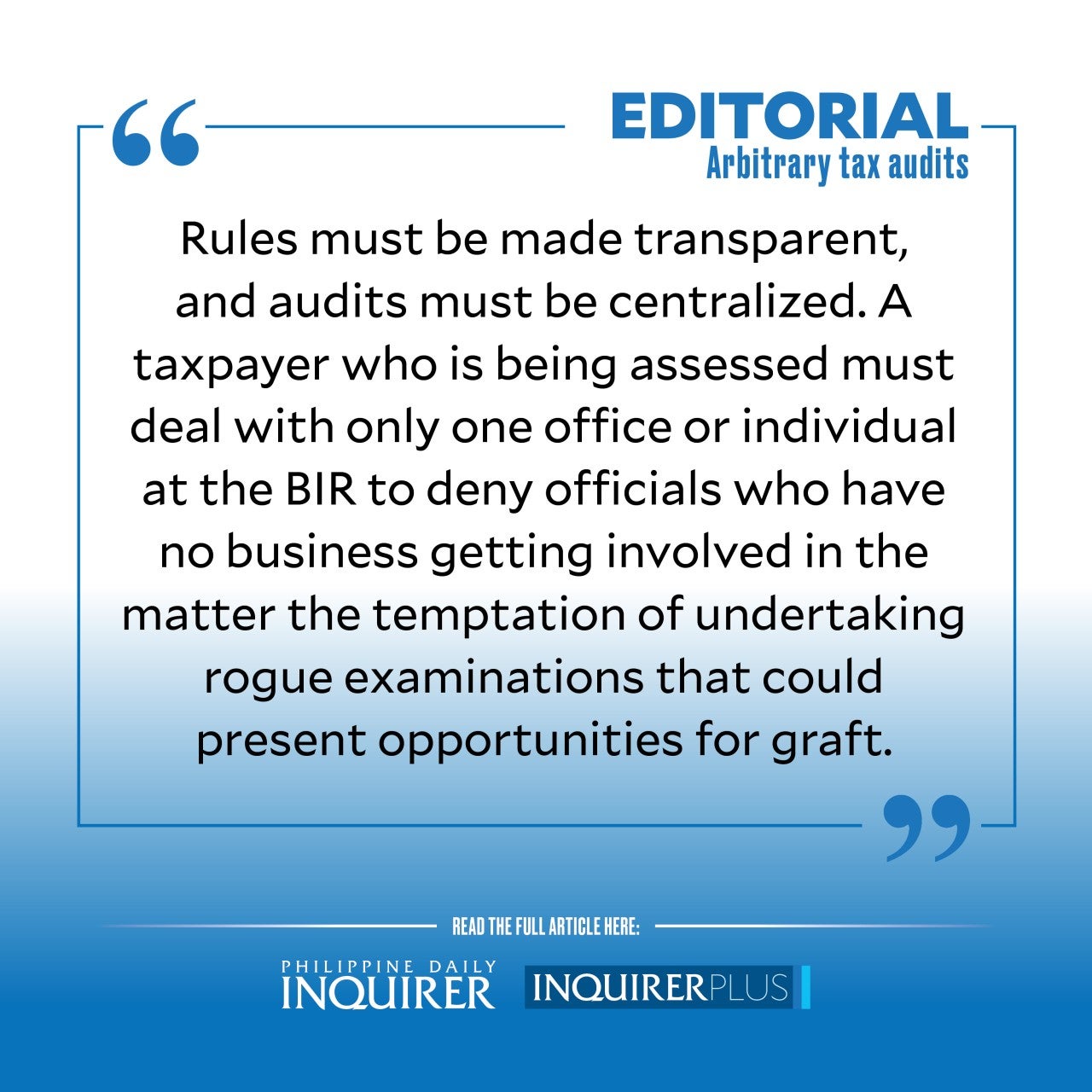 “Nothing is certain except death and taxes,” American statesman Benjamin Franklin once said.

In a recent event in the Philippines, however, it could have been death due to a tax issue — the death of a company through a mandated closure, that is — if some officials of the Bureau of Internal Revenue (BIR) had gotten their way.

Last week, the tax agency inexplicably put out a media advisory that it was calling a press conference the following day to serve a closure order on Megaworld Corp., one of the country’s largest developers of commercial, office, and residential real estate.

Having been leaked on social media while financial markets were still open, the supposed closure order inflicted damage to the company swiftly. In a matter of minutes, Megaworld’s stock price plunged 9 percent, wiping out almost P8 billion in market capital from the portfolios of its shareholders, big and small. Fortunately, its stock price recovered by the end of the trading session.

Subsequently, BIR officials detailed a string of suspected tax violations on the part of Megaworld in justifying the harsh enforcement action. But as the closure order was about to be served on the firm, the issue was “for some unknown reason … leaked to the media,” BIR Deputy Commissioner Arnel Guballa told the House ways and means committee the other day.

Megaworld maintained, on the other hand, that it has no outstanding tax liabilities and that no audit was actually conducted because it refused to accept an order from a BIR unit that it believed had no jurisdiction over the issue.

An investigation into the matter by lawmakers became a “he said, she said” session where both parties asserted the correctness of their positions, refusing to yield to the other side.

Whoever is correct between the BIR and Megaworld, one thing is certain: announcing to the public — specifically to the press — that the tax agency will implement a closure order against a large corporation is not the proper way to resolve a dispute over tax liabilities.

There are well-established procedures for dealing with disputes arising from disagreements between the tax agency and taxpayers over just how much taxes are to be levied by the former from the latter, none of which involve using the press to inflict financial and repetitional damage on the taxpayer.

Levying taxes without a formal audit and the back-and-forth dialogue that usually accompanies disputes between the taxman and the taxpayer could very well be the fiscal equivalent of the dreaded “tokhang” operations against illegal drugs conducted by law enforcers that resulted in thousands of deaths without the benefit of due process. It is wrong. There are rules for these situations, and it is important that government officials follow them religiously.

The whole affair is an ugly episode in the intricate interplay between government agencies and the private entities or individuals they have responsibility over. The way some BIR officials handled the dispute with a large corporation that is arguably one of the biggest economic drivers of the country and one of its largest creators of value sends the wrong signal to investors.

It tells the business community, both local and foreign, not to argue with government instrumentalities, or they might wake up one morning and find themselves on the receiving end of a closure order without having gone through the correct process.

Going forward, lawmakers should simplify the Tax Code to make it easier for law-abiding persons, whether corporate and individuals, to pay their taxes. As much as possible, the occasions for subjectiveness in the application of tax laws must be reduced, if not eliminated entirely, to prevent the possibility of corruption.

Rules must be made transparent, and audits must be centralized. A taxpayer who is being assessed must deal with only one office or individual at the BIR to deny officials who have no business getting involved in the matter the temptation of undertaking rogue examinations that could present opportunities for graft.

Without these reforms, businesses might charge higher prices to account for potential surprise tax levies, foreign investors will stay away, and the ultimate losers will be the Filipino people.