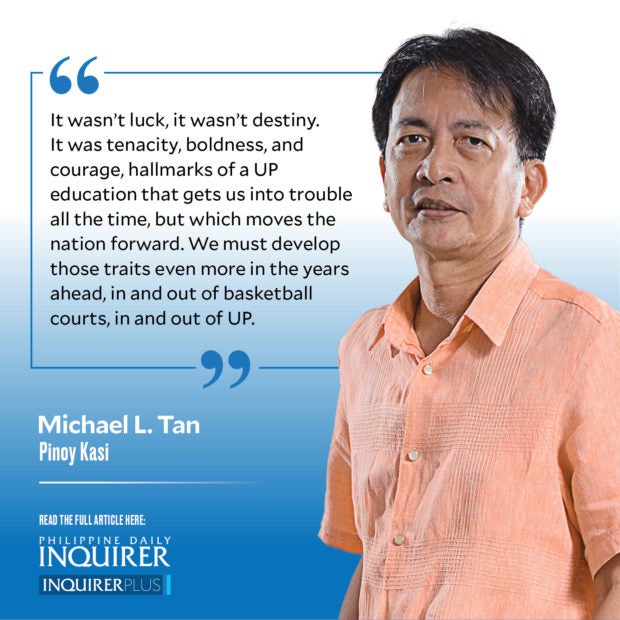 What an emotional roller-coaster of a week it has been with the elections and its aftermath.

Add on the UAAP (University Athletic Association of the Philippines) championship round for men’s basketball, which has been, throughout UAAP’s 84 years, its prime event.

The road to the championship is grueling, eight universities playing each other whittled down to four, and then for the finals, just two. This year they were Ateneo de Manila University, champion for the last three years, and the University of the Philippines (UP), whose last championship was in 1986, or 36 years ago.

UP won the first game, on the eve of elections, but lost in the second. The morning of the third game, the do-or-die decider, my 12-year-old daughter, a fervent basketball fan, was fretting about it being Friday the 13th.

I gently explained what a superstition is, making false cause-and-effect conclusions, with a joke. If it is going to be “malas” (bad luck) it could be for our other love Ateneo. (My daughters are in Jesuit schools, as I was from grade school to my second year in college.)

Off we went to the game, heart-stopping all throughout. Both teams were superb, the gap between the two teams was always only a few points, with several ties. The fourth quarter, in fact, ended with a tie, forcing a five-minute overtime. As the clock ticked away to less than a minute left again with a tie, UP Fighting Maroon JD Cagulangan delivered the victorious long shot.

The MOA arena exploded with jubilation. I was so glad my daughter was with me because I so needed someone to hug as I broke down in tears.

I thought back to how neglected UP’s varsity teams had been, with a sharp line drawn between favored nerds and neglected jocks. We actually had faculty members who refused to take in varsity players in their classes.

There was more: unlike the other UAAP schools, all private, we had limited budgets for coaches, facilities, equipment, and support for the athletes. UP alumnus Renan Dalisay, in a Facebook post in 2014, described the dismal situation, including a scathing: “The athletes have been playing hungry, literally.” Renan and other concerned alumni, crossing fraternity and organizational boundaries, offered to help. Thus was born nowheretogobutUP, the name playing on the fact that our varsity teams ranked at the bottom in UAAP.

Through the years, alumni support grew and we, in the administration, learned to appreciate the athletes as iskolar ng bayan (people’s scholars), seeing the hours they put into practice, and realizing that learning sports involved as much rigor as you have for the sciences and the arts. Faculty volunteered to offer special classes and tutorials for athletes and, most importantly, joined the growing crowds trooping to cheer at the competitions.

Early on, I noticed the fans were no longer limited to UP constituents. At one women’s volleyball game, I was told an entire clan — no relationship to the players — had come in from Nueva Ecija, bringing in food packs for the team.

People relate to UP’s varsity players, many of whom come from middle- and lower-income families, the varsity route offering a chance to fulfill dreams for a UP education.

Seeing these developments, I realized, and began to remind our varsity players: ang tagumpay ng UP ay tagumpay ng bayan, each UP varsity victory is a victory for the nation.

Because of the final game, I missed the thanksgiving rally for the Leni team, but the themes and feelings of both events were starkly similar. Amid the despair, we heard the call of Leni and her supporters: “Kapit,” hold on, tight, to each other.

In the arena, crowds chanted “UP fight.” In the dugout, the UP team listened to coach Goldwin Monteverde as he chose Cagulangan as the key player in the final round: “Huwag bitawan,” don’t let go. In the end, victory did mean letting go, making that long shot. Camille Naredo, a sportswriter, noted there was “no fear of the moment” on the part of Cagulangan, player number 13.

It wasn’t luck, it wasn’t destiny. It was tenacity, boldness, and courage, hallmarks of a UP education that gets us into trouble all the time, but which moves the nation forward. We must develop those traits even more in the years ahead, in and out of basketball courts, in and out of UP.