Challenges ahead for President-elect 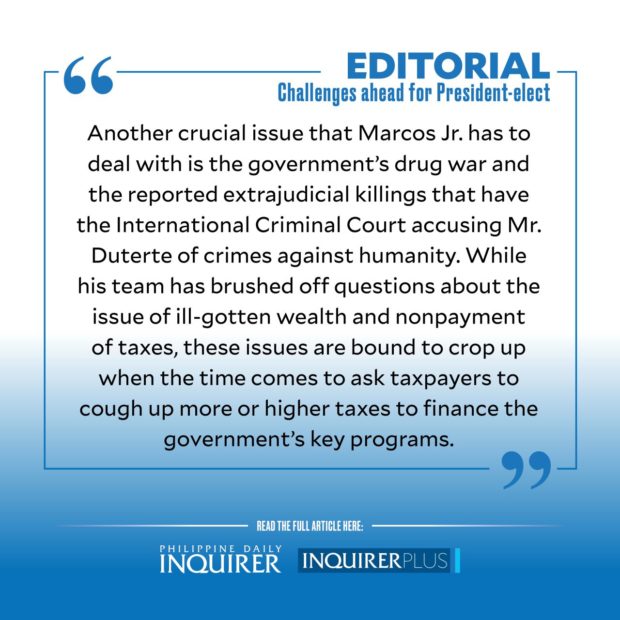 The people have spoken. With an overwhelming lead of some 17 million votes over his closest rival as of Wednesday’s latest but unofficial count, Ferdinand Marcos Jr. is poised to become the country’s next president. Admittedly, this victory has been tempered by issues on the voting process that the Commission on Elections (Comelec) has yet to fully explain, including at least 1,800 incidents of malfunctioning vote-counting machines that forced voters to resort to manual voting, the inordinate delay in transporting replacement SD cards, and the unbelievably speedy transmission of the bulk of election results even as a large number of registered voters were still lined up to claim their constitutional right. President Duterte himself saw the need to look at the alleged irregularities, saying on Thursday: “I hope the Comelec will find time to investigate. Just to disabuse the minds of those [who think] that there was cheating.’’

Now that it’s over but the official canvass and proclamation, the foremost question on people’s minds is: What happens now?

It’s a fair question, given that Marcos Jr., only son and namesake of President Ferdinand Marcos Sr., has avoided public debates, media questions, and interviews that might shed light on his plans and platforms beyond his team’s call for “unity.”

Except for suggesting tax breaks and setting aside a portion of the internal revenue allotment for micro, small, and medium enterprises during a Go Negosyo forum in December, the younger Marcos has been mum on how to handle the country’s multitude of problems amid a pandemic, foremost of these its economic recovery. So far, Marcos spokesperson Vic Rodriguez has revealed in the course of the campaign that the incoming president would continue Mr. Duterte’s “Build, Build, Build” infrastructure program and strengthen government support for farmers and the agribusiness sector, though there were no specifics yet on how these would be implemented.

Aside from the major challenge of reviving an economy hobbled by an almost P13-trillion debt from the Duterte administration’s pandemic spending, the country’s next leader must also deal decisively with a corruption-ridden bureaucracy and shrinking remittances from overseas Filipino workers forced to come home because of the global health crisis. The presumptive president might have to spar with policymakers and finance managers on how to fully open the country’s tourism and business sectors while also implementing strict pandemic protocols.

Another crucial issue that Marcos Jr. has to deal with is the government’s drug war and the reported extrajudicial killings that have the International Criminal Court accusing Mr. Duterte of crimes against humanity. While his team has brushed off questions about the issue of ill-gotten wealth and nonpayment of taxes, these issues are bound to crop up when the time comes to ask taxpayers to cough up more or higher taxes to finance the government’s key programs.

Then, there’s that perilous path that the new president must negotiate cautiously as China and the United States battle for supremacy in the region. How to fight for the country’s sovereignty, without alienating its allies and neighbors, is a crucial issue that must be addressed in Marcos Jr.’s foreign policy. Given that both countries have signified their support and willingness to work with the elected leader, with the United States saying it looks forward to strengthening its “enduring alliance” with the Philippines, and China stressing its “long-standing traditional friendship” with the country, the new Chief Executive must seize the initiative to establish trade deals and treaties, advancing the country’s interest with these two superpowers, but without his predecessor’s stance of not standing up against incursions in our territorial waters.

True to his word of hitting the ground running, Marcos Jr. met Wednesday with key players in his camp to discuss possible choices for his administration’s transition team. So far, he has named as education secretary incoming vice president Sara Duterte who, he said, “is a mother [who] wants to make sure that the children are well-trained and well-educated.’’ This is a crucial post given the pandemic’s effects on the quality of learning and education of the youth.

President-elect Marcos Jr. has promised as well to update the country regularly in his first official speech on Wednesday, but his announcement that he wasn’t taking any questions after the press briefing does not sit well with the media’s expectations of access, transparency, and accountability from the new Chief Executive.

Being more receptive and open even to tough questions will definitely boost confidence in this incoming leader’s ability to weather the expected storms that would be unleashed by global events, the pandemic, economic doldrums, and, yes, the high expectations that Filipinos have of him right now.