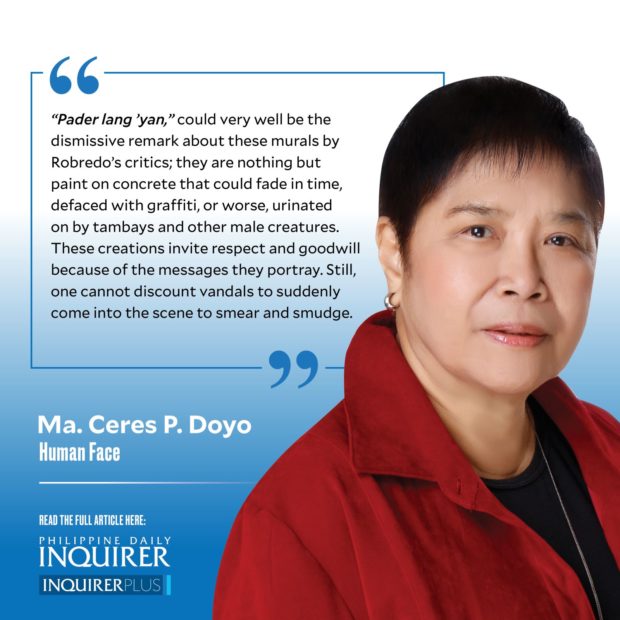 Whether she loses or wins in the May 9 national elections and becomes the 17th president of the Philippines, Vice President Leni Robredo’s run for the highest post would leave physical, indelible marks on the landscape. Her supporters and volunteers, many of them young and first-time voters, have been painting the town pink with predominantly pink murals on walls, buildings, and other private properties made available for artworks that reflect what Robredo stands for.

Among the first to appear on the landscape after Robredo announced her candidacy in October 2021 were huge LED displays on tall buildings, but later, countless murals began to appear on concrete walls along roads and side streets. These were not commissioned works but created by Robredo’s supporters, many of them in the cusp of adulthood or supervised by older known artists who were only too eager to join the challenge. In other words, these murals were group or community efforts, the product of creative minds and hands. There was no stopping the energy.

“Pader lang ’yan,” could very well be the dismissive remark about these murals by Robredo’s critics; they are nothing but paint on concrete that could fade in time, defaced with graffiti, or worse, urinated on by tambays and other male creatures. So far, no photo of a mural with a “Bawal umihi dito” warning has been posted on social media. No need for that. These creations invite respect and goodwill because of the messages they portray. Still, one cannot discount vandals to suddenly come into the scene to smear and smudge.

Speaking of “vandals,” the first on the scene were local law enforcers who whitewashed the murals in Isabela province. After appeals to the Commission on Elections and making clear that private properties should be exempt from campaign display rules, those murals were restored. I do not know if the local government compensated the creators with fresh cans of paint. Think of the effort and cost that went into the making of those murals. With doubts cleared, more murals came to be.

Religious sisters have joined the painting frenzy by offering their concrete convent and school campus walls to be painted over and doing some painting themselves with the help of artists from their communities and schools. No such activity has been witnessed in past elections and now, even while social media hold sway, nothing beats on-terra-firma displays of support.

A huge part of the Good Shepherd Convent wall in Quezon City now has a mural extending from Aurora Boulevard to Batino Street with their schools’ alumni helping even while it rained. Last Christmas, the much-visited Good Shepherd compound in Baguio City, a favorite tourist destination, was decked with pink parols (stars), a Filipino Christmas symbol. And so were many other convents and schools, like the Benedictine-run St. Scholastica’s College in Manila. A wall of a nearby property of the Benedictines now also has a mural. The Holy Spirit Sisters have also offered their property wall.

Speaking of parols, the Leni-Kiko campaign rally in Pampanga on April 9 saw the Kapampangans pulling all the stops and showing off their giant lighted parols that they are best known for. It was like Christmas in April, so what?

Not far from where I live is an eight-panel mural on the Queen of Peace Convent wall of the Missionary Sisters of the Immaculate Heart of Mary (the ICM Sisters) on Banawe Avenue in Quezon City, the back of St. Theresa’s College, which they run. Those on their way to the adjacent National Orthopedic Hospital would not miss it. I did ask Sr. Eleanor Llanes, ICM, a visual artist and sacred art expert, for her thoughts on how the design was conceptualized, who were involved, and how the work process began and ended. She did give me her written reflections that I will use for an article.

The Banawe Avenue mural has Robredo’s campaign catchwords, among them, “Kulay rosas ang bukas” and “Angat buhay lahat.” The faces of principal contenders Leni and Kiko are not there for a reason, but the predominantly pink mural is a tell-all. I did take photos of the long stretch as completed, and Sr. Eleanor gave me photos showing the artists and volunteers on their feet and knees while the work was in progress. Of course, the ICM sisters had to come out en masse for a group photo.

From Christmas parols to murals, from Leni-Kiko tarps waved in the ocean depths to the base camp of Mt. Everest, what, where next?

Read Next
The guns of 1924
EDITORS' PICK
DOH says COVID-19 cases plateauing, but public shouldn’t be ‘complacent’
House energy committee chair Arroyo bats for cheap electricity
23,000 cops to be deployed nationwide for school reopening
Bongbong Marcos receives second booster shot vs COVID-19
What to watch out for when selecting a video surveillance solution
Unleash the photographer in you this World Photography Day with vivo smartphones
MOST READ
Korina Sanchez reunites with former ABS-CBN co-anchors Julius Babao, Cheryl Cosim
Tulfo rebukes cops for wrong approach to road incidents; PNP chief Azurin vows probe
LOOK: Mavy Legaspi gifts Carmina Villaroel with Hermes bag on her birthday
Cherie Gil’s daughter on partying after mom’s death: ‘I’m grieving but it’s not my job to show you that’
Don't miss out on the latest news and information.