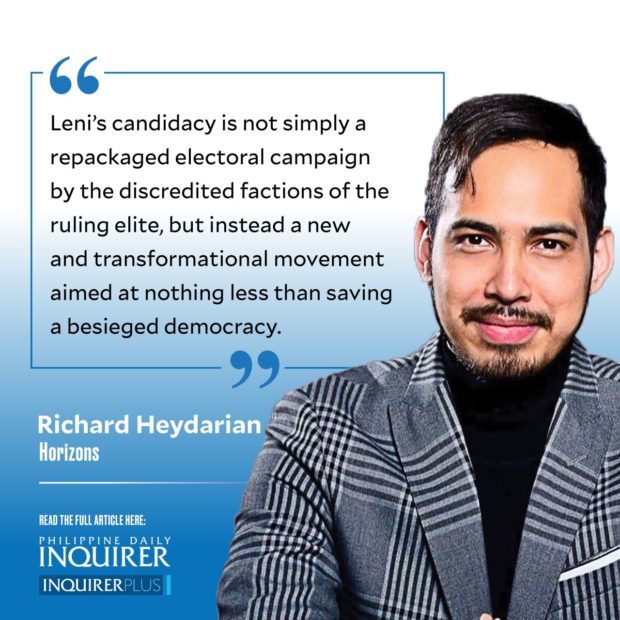 Corrupt or honest? Plunderer or servant? Those who are absent or those who show up? Those who soldier on or those who retreat? Hardworking or lazy? … My country, you choose!” exclaimed celebrated actor John Arcilla in arguably the most impassioned speech in this year’s elections, so far.

“We do not worship [Vice President] Leni Robredo … We do not sanctify Leni Robredo, we love her because she loves our country,” he continued during last weekend’s grand rally in Macapagal Avenue, emphasizing how ultimately, we voters, the Filipino people, can and should decide the fate of our democracy.

The famed actor reminded Leni’s supporters, “[O]ur responsibility as Filipinos does not end there. We need to watch over her so our dreams and her promises will be fulfilled. So let us not desert her upon being seated.”

In short, no matter what happens, and especially if Leni pulls off another electoral upset against the scions of the ancien régime, she will need the sustained and passionate support of every single Filipino, who wants a dignified and competent leadership. Leni’s candidacy is not simply a repackaged electoral campaign by the discredited factions of the ruling elite, but instead a new and transformational movement aimed at nothing less than saving a besieged democracy.

To be honest, John Arcilla is an actor that I have been carefully following in recent years. He is an impeccably versatile and unquestionably world-class actor, who has had an outsized influence on our contemporary political culture.

Few years ago, I and a perspicacious colleague, Dr. Lisandro Claudio, realized that we independently arrived at a similar conclusion: namely, that Arcilla’s unforgettable portrayal of Antonio Luna in “Heneral Luna” may have inadvertently contributed to the authoritarian nostalgia, which catapulted Rodrigo Duterte to the presidency.

I vividly remember how, when the movie was screened, the audience would erupt into a state of inexplicable frenzy whenever Heneral Luna cussed at seemingly inept, indecisive, and arguably unpatriotic characters. Mr. Duterte’s cuss-laden speeches, which captured the country’s imagination just a year later, were eerily familiar; I would even dare to say that it was likely curated upon optimizing the “Heneral Luna” phenomenon: An unmediated, almost visceral, fascination with strongmen as supposed secular saviors.

More than six years later, here is Arcilla, in his own skin and voice, reminding the Filipino people that he is part of an entirely new, energized movement, which seeks to enact the core aspirations of countless Filipnos, who took to the streets, throughout the past century, to establish a truly genuine democracy.

From the crowd that wept upon the execution of Padre Jose Burgos and his patriotic colleagues in 1872 to the thousands of those who heeded Bonifacio’s call for a mass revolt against the Spanish colonizers and all the way to the millions who solemnly commemorated Benigno “Ninoy” Aquino Jr.’s martyrdom at the Luneta, the dream for a better Philippines has never died.

Thanks to the sincere leadership of Corazon Aquino, a widow with no background in high-stakes politics, we managed to lurch away from a bankrupt dictatorship. The reality, however, is that the post-Edsa regime that replaced the Marcosian nightmare remained woefully wanting, largely failing to embody the great republican ideals that animated the people power revolution three decades ago.

Absent radical reforms and transformational leadership, the post-Marcosian era saw more than 80 percent of elected legislative offices dominated by self-dealing political dynasties. Meanwhile, lopsided economic policies enabled the 40 richest families to gobble up to 76 percent of the newly created wealth in recent history. This is an astonishing level of inequality and wealth concentration, which has made a mockery out of our democratic aspirations.

Against this backdrop of widespread disaffection and despondency, the only way to save our democracy is to advocate for a genuine one. Leni’s historic candidacy represents arguably the second chance for the Filipino people to realize the true aspirations of the 1986 Edsa People Power Revolution, itself the upshot of a century-old struggle dating back to the days of Rizal and Heneral Luna.