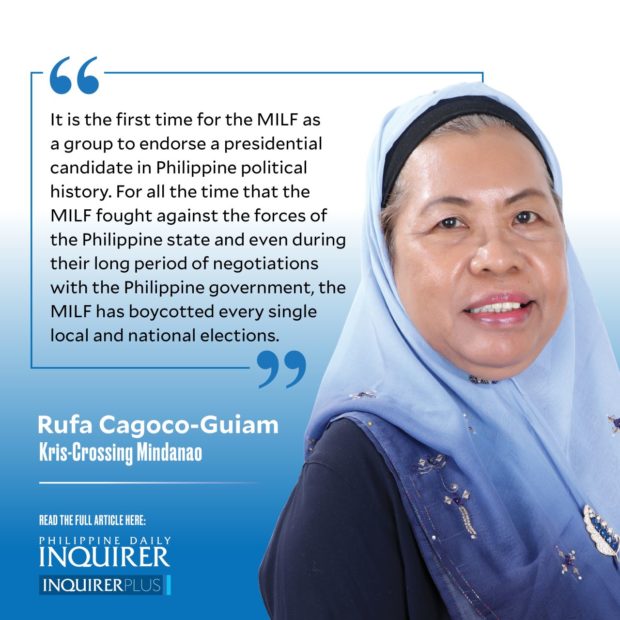 CAMP DARAPANAN, Maguindanao — Last Saturday, April 23, was the 57th birthday of Vice President Maria Leonor “Leni” Robredo, and it was quite historic.

According to Naguib Sinarimbo, minister of the interior and local government in the BARMM, the UBJP’s endorsement of VP Leni as their presidential candidate was “arrived at after a long and careful deliberation including the policy of inviting presidential candidates to visit the UBJP leadership and present their agenda or platform of government, to include their position and policy on the Bangsamoro peace process and the implementation of the peace agreement” (the Comprehensive Agreement on Bangsamoro or CAB that both the MILF and the Philippine government panels signed in March 2014). It is the result of a long and tedious decision-making of the UBJP’s principled stand on ensuring the gains of the peace process will be sustained under VP Leni’s future presidency.

What made the UBJP decision final was VP Leni’s commitment to sign a pledge to implement a five-point platform once she sits as president. These are: 1) hasten the implementation of the CAB; 2) fully implement the provisions of the BOL and continue the momentum of the intergovernmental relations body in due regard and recognition of genuine autonomy; 3) immediate passing of pending transitional justice bills in Congress; 4) activating Amnesty International and fast-tracking the appointment of its members; and 5) completion of the rehabilitation of Marawi City and allowing the safe return of the internally displaced persons there.

The MILF/UBJP leadership is predominantly male-led, with a prevailing male membership. In the past and the present, there is a popular notion among Muslim communities that women are not “desirable” as political leaders. I know of several ustadz (religious teachers in Arabic/Islamic values) friends who consider having a female president or leader as haram (forbidden) in Islam. They cite some hadith (traditions of the Holy Prophet Muhammad, peace be unto Him) that prescribe these, noting that countries led by women “will not become famous or will not be progressive.” But there is a historical context to these hadiths, and so much has happened in the world today, that many Muslim scholars also acknowledge that the idea of women as haram leaders no longer hold water in the present context.

The outcome of the May 9 elections will determine if VP Leni will continue receiving historic gifts on her 57th year. Abangan!