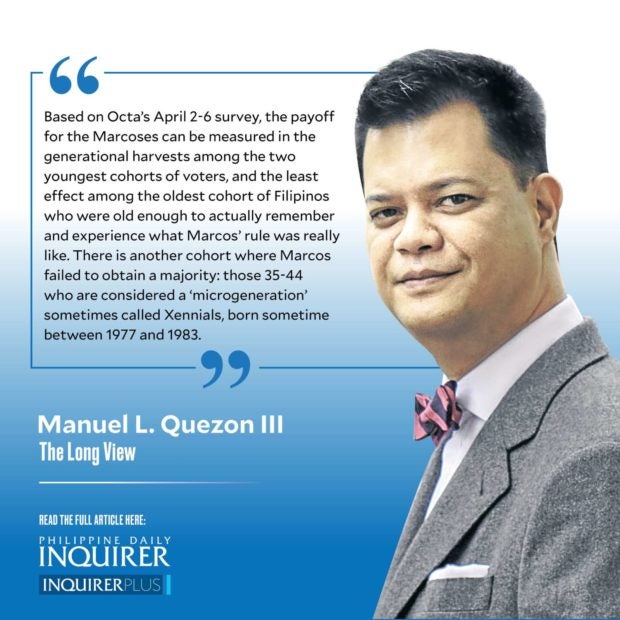 An online broker puts it this way: “Muted election cycle boost: PSEi historically positive on election years but may fail to replicate strength of prior cycles given purported lower political spending and negative impact of inflation on consumer demand (especially oil).”

What struck me about this prognosis is that it bucks the conventional wisdom about elections, which is that they provide a predictable uptick in the economy every time they happen. Though hedged—by the use of the word “purported”—because what’s unsaid is that there must surely be just as much, if not more, money sloshing around, but it’s just been diverted to far-less-transparent purposes. Which brings us to a report by Regine Cabato recently published in The Washington Post.

The report of her team dissected the revisionism project of the Marcoses which has been going on, online, for 20 years, embracing Facebook, TikTok, YouTube, and even Wikipedia. It is a well-oiled operation that has evolved from copy-paste comments by anonymous accounts to the cultivation of realistic, convincing profiles complete with names, pictures, and postings about nonpolitical things. According to their research, the estimated salary of a troll network moderator who churns out daily “script” or talking points to defend the client ranges from P40,000-50,000 ($700-800) monthly; on the other hand, “micro-influencers” (those with “only” 10,000 followers) can earn P300,000-350,000 ($5,000+), including bonuses, for a monthly retainer during the election season (one job offer shared by a source was pegged at P25,000-30,000 to manage a Facebook page, with a higher fee for anyone fluent in Ilocano). The article also says that there is a sustained branding effort to project Sandro Marcos as a TikTok heartthrob to secure the political dynasty’s status among Gen Z and others.

Based on Octa’s April 2-6 survey, the payoff for the Marcoses can be measured in the generational harvests among the two youngest cohorts of voters, and the least effect among the oldest cohort of Filipinos who were old enough to actually remember and experience what Marcos’ rule was really like. There is another cohort where Marcos failed to obtain a majority: those 35-44 who are considered a “microgeneration” sometimes called Xennials, born sometime between 1977 and 1983.

Here’s the breakdown according to Octa:

Recall that 58 percent of voters belong to what is considered the “youth” which is defined as those between the ages of 18 and 41 (approximately 37 million voters, while 42-57 total 16.7 million voters; and 58 and above, 11.9 million voters).

We are in the fast and furious closing weeks of the campaign but already, the finger-pointing, at least online, has begun. By which I mean the kinds of comments from generally young politically-minded people who argue basically along these lines: 1) There ought to have been a law banning the Marcoses from returning; 2) Filipinos are too kind-hearted and forgiving. The underlying premise from those making similar comments is a criticism of older generations.

Yet the numbers suggest three things. First, the Marcos restoration, if it happens, will have been made possible fundamentally by the Marcoses winning the hearts and minds of the young, except, it seems, the 35-44 generation that underwent its own people power experience in 2001-06, just as it worked the least among those old enough to have been active in the years of the dictatorship. Second, that for all the other cohorts where Marcos is claimed to enjoy majority support, they are cohorts that have been targeted for two decades online; and one could argue the 30 percent support the Marcoses achieved in 2010-16 only nearly doubled when social media manipulation also evolved by leaps and bounds. Third, that it took decades, colossal funding, and unexpected innovations in technology says something about it being an uphill struggle for the Marcoses.