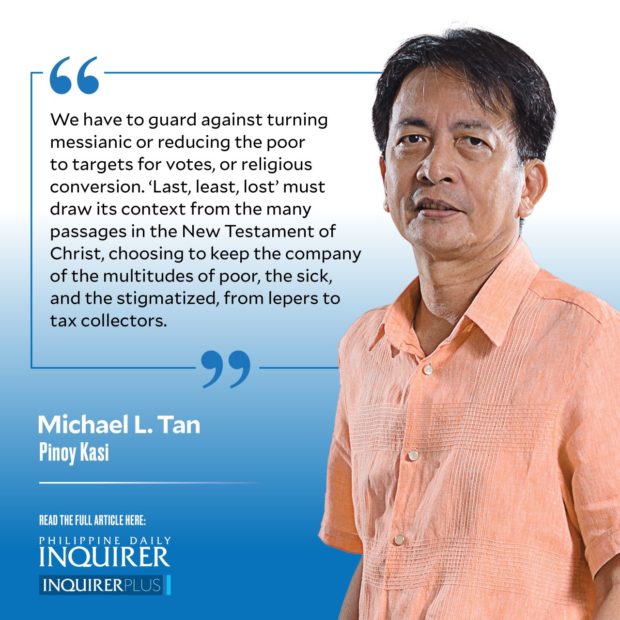 I recently joined a panel of speakers for an online symposium on Ignatian youth spirituality, organized by students from Jesuit schools in the Philippines with a request in the invitation to address “the last, the least, the lost,” a phrase I had not seen before, even if the first two words did seem familiar.

It turns out the phrase has a following among Catholics and Protestants concerned about social justice. The keywords come from three passages from the New Testament: “So the last will be the first, and the first will be last” (Matthew 20:16), “… [W]hatever you did for one of the least of these brothers and sisters of mine, you did for me” (Matthew 25:40), and “For the Son of Man came to seek and to save the lost” (Matthew 18:11).

Powerful ideas transcend time and culture. John Ruskin, the English social philosopher, took Matthew 20 and developed it into four essays for a newspaper, where he argued for greater social justice. The essays were compiled into a book, “Unto the Last,” published in 1862, a copy of which was gifted, in 1908, to a young Indian lawyer in South Africa by an English friend, in a vegetarian restaurant. (Globalization does have its bounties and is not new!) The young Indian was Mahatma Gandhi, who translated Ruskin’s work into Gujarati and developed some of the English philosopher’s ideas into Sarvodaya, a political philosophy of uplifting economic and social conditions for all, rather than a few, that has galvanized millions, in India and in the world.

Partly it’s language. The three English words, all starting with “l,” conveniently allowed alliteration. I looked up Filipino translations of the New Testament and found the three words were rendered as hulí (least), pinakahamak (last). “Lost” is translated as “napapahamak” and “nawawala” as in the lost sheep.

But we do have one word that captures it all: laylayan, or more completely, ang mga nasa laylayan ng lipunan, people at the edges of society or, in a word, the marginalized.

Leni Robredo has used ”laylayan,” for which she was chided by rival presidential candidate Isko Moreno as being “elitist,” despite its increasing use in commentaries and discussions about our dismal social and economic conditions.

Certainly though, Isko’s criticism can also be taken as a reminder that we have to go beyond political correctness when we use “last, least, lost,” “poor, deprived, and oppressed” (from the 1970s) or “ang mga nasa laylayan ng lipunan.”

It’s called virtue signaling, doing some good but sometimes almost in contradictory terms, for example observing Lent by eating “fish,” defined all too often as a meal of, say, baked clams and lobster linguine and never mind that the poor have year-long Lenten observances with tuyo (dried salted fish) and instant noodles.

We have to guard against turning messianic or reducing the poor to targets for votes, or religious conversion. “Last, least, lost” must draw its context from the many passages in the New Testament of Christ, choosing to keep the company of the multitudes of poor, the sick, and the stigmatized, from lepers to tax collectors. (Speaking of which, don’t forget April 15, Good Friday, and this year’s penitential income taxes. No extension, our merciless tax collectors have announced.)

“Last, least, lost” is about humility, compassion, and discernment, understanding the main issue is of inequity of people forced into their situation, often by our own denial of their existence, as with the thousands of victims of human rights violations, the disappeared is the correct term. “Last, least, lost,” “poor, deprived, oppressed”—they too are disappeared and invisible, remaining at the margins because we choose to keep them so.

There is a sculpture by Timothy Schmalz, again inspired by Matthew 20, addressing this issue of denial. The original was installed in the University of Toronto with replicas found now in several churches across the world, including the Manila Cathedral. The sculpture shows an all too familiar scene in public places, that of the homeless sleeping on a bench, face, and body covered by clothing that gives scant protection against the elements.

Only the feet are visible, showing wounds from crucifixion.