Woman of the storm-battered shores 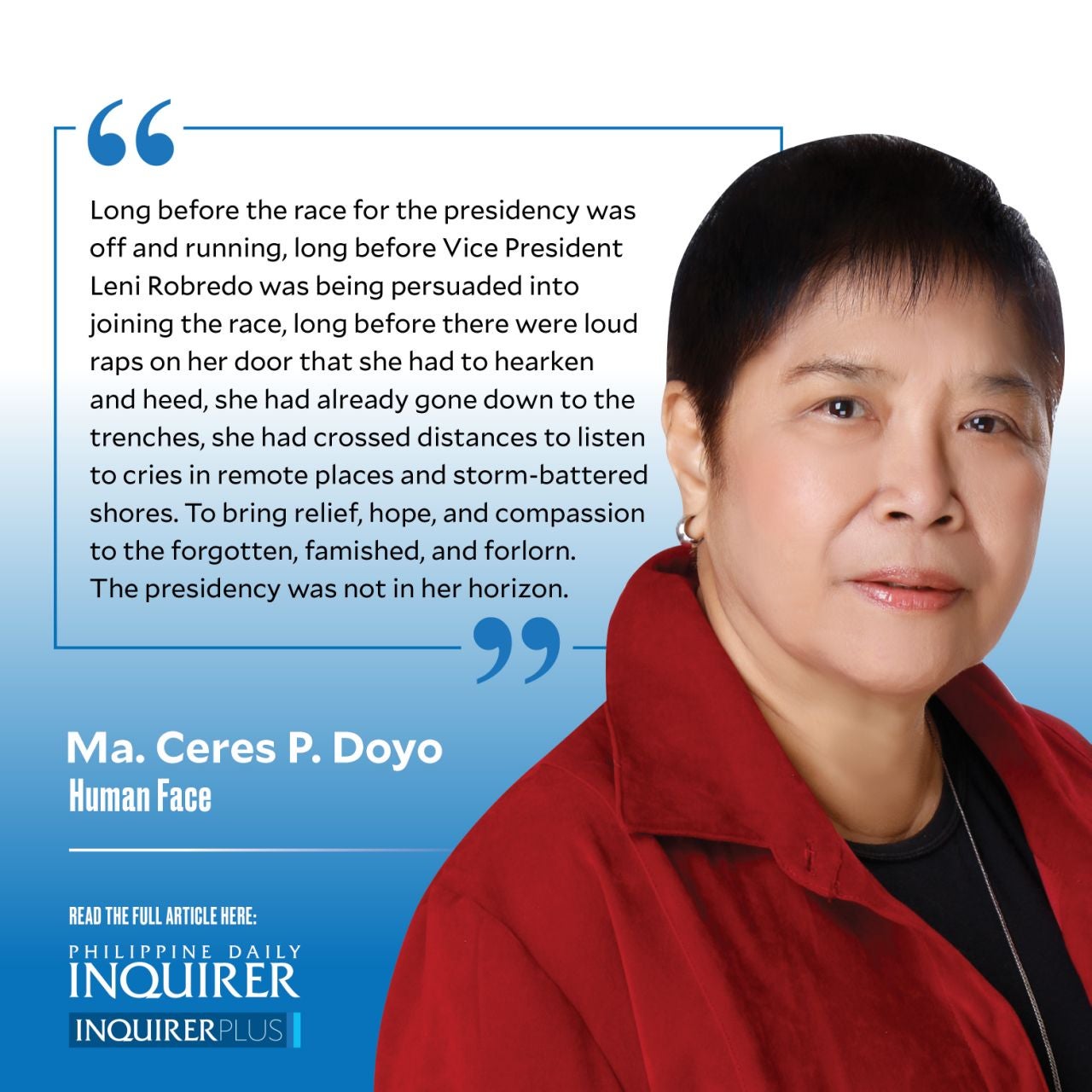 She crossed the waters on fishing boats, back-rode on motorcycles, took tricycles, and traveled in public buses. She was seen wading in flooded waters, sometimes barefoot or wearing flip-flops with little to protect her from the inclement weather and festering vermin in the muck. Because she had to get there and get there fast.

I say this again: Long before the race for the presidency was off and running, long before Vice President Leni Robredo (VPL) was being persuaded into joining the race, long before there were loud raps on her door that she had to hearken and heed, she had already gone down to the trenches, she had crossed distances to listen to cries in remote places and storm-battered shores. To bring relief, hope, and compassion to the forgotten, famished, and forlorn. The presidency was not in her horizon.

None of the present crops of so-called presidentiables have walked and waded in those miles like she did. Sure, she is Vice President, but one who has been demeaned, belittled, the rug pulled under her feet, the chair pulled away even before she could warm it, no thanks to the one seated in the highest seat who made sure she had no place at the table. VPL had to find a way to deliver, and she did.

FEATURED STORIES
OPINION
‘Wait for us; we will be there’
OPINION
Who cares about GNP or GDP?
OPINION
Marcos: ‘History is not through with me yet!’

It is during this campaign period that we now see where her strength and support are coming from—from volunteers, many of them just in the cusp of adulthood, who see in her a doorway to their dreams for themselves and their country. And what a leader should be—capable, intelligent, compassionate, stateswomanlike, strong, and without a tinge of corruption.

Energized by the teeming pink crowds that shout “Leni-Kiko!” a colleague of mine rose from her pandemic-induced ennui and strode right into the Leni-Kiko campaign in Central Luzon and discovered the writer’s fire she still had in her. Read her breathless reportage that will take you to the heart of the Leni-Kiko campaign (“Tears and Fears and Leni-Kiko’s ‘Abonados’” by Rochit Tañedo in Positively Filipino, a trailblazing online magazine).

One takeaway from the crowds is the oft-repeated refrain, “Babawi kami” (“We will make it up to her”). Oh, now they remember how VPL, this woman, had come when no one else did, or if at all, came late, while she and her ragtag team reached even places where she badly lost when she ran for vice president in 2016. It tugs at the heart, this “Babawi kami,” this people’s promise to make it up to her with their votes on May 9.

For me, one of the best video clips of VPL that has surfaced is the one that shows her in a fishing boat, the wind in her face and hair, speaking with the leader of a fishermen’s group, while the boat sliced the waters. So different, I thought, from the posters of yore that showed candidates wading in rice fields. These Amorsoloesque scenarios are now better left to the master himself.

With the rice tariffication law still the heavy cross of rice farmers, candidates better do acts that are more impressive and life-threatening, like jet-skiing in the disputed West Philippine Sea to taunt Chinese President Xi Jinping, for whom the present Philippine president owes his obeisance.

That big, bully neighbor now supplies cheap, smuggled vegetables, driving Filipino vegetable farmers to penury because they cannot compete. And while at it, one cannot help the issue about onions, too, the pink variety specifically, whom detractors of VPL say compose the huge turnout in her campaign rallies, some even breaching the 100,000 mark, as photographed by drones. Photoshopped and nothing but onions, detractors say. The real onions are rotting in the fields while farmers weep. Calling on Sen. Kiko Pangilinan, VPL’s running mate, for whom food production is a top agenda.

More artists are turning the towns and cities pink with their Leni-Kiko murals. People paint on walls, empty spaces, private properties, and even very tall buildings. The volunteers are mostly young artists mentored by older ones. The latest ones are those designed and supervised by Inquirer cartoonist Jess Abrera in Antipolo and the wall of the ICM Sisters on Banawe Avenue in Quezon City with artist Sister Eleanor Llanes supervising. The murals could soon draw selfie-happy tourists.

The woman of the storm-battered shores is now an icon, a subject of popular art.