The unbearable whiteness of international law 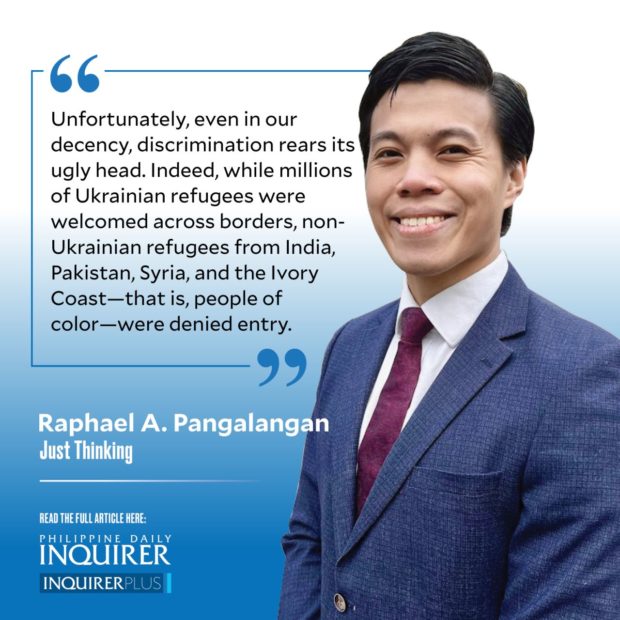 Russia’s full-scale military invasion of Ukraine has uprooted the lives of over 10 million people—a quarter of the nation’s population.

The unabashed aggression has been met by an unprecedented humanitarian front. As of the end of March, 2,451,342 Ukrainian refugees had been welcomed into Poland alone—a stark contrast to its (non-)reception of Afghan asylum seekers just three months prior. Further west in Den Haag, just four days into the war, the International Criminal Court-Office of the Prosecutor (OTP) announced its intention to open an investigation into the situation in Ukraine. That decision was eventually overtaken by 41 state referrals allowing the OTP to bypass the need for judicial authorization and streamline the investigation process—a remarkable combination of prosecutorial nudging and political will unseen before.

Make no mistake: Humanitarian interests are noble causes worthy of our support. Filipinos must welcome these efforts. Throw behind them our weight and our wallets. We must open the door to our displaced neighbors, just as we did for the 1,300 Jewish refugees fleeing the Holocaust and the 6,000 “White Russian” emigrants in the wake of the Bolshevik Revolution. We must stand with Ukraine.

But amidst that backing, perhaps we, too, can take a step back and ask ourselves: Where has this united front been hiding? Because, quite frankly, I have not seen this animal before.

Unfortunately, even in our decency, discrimination rears its ugly head. Indeed, while millions of Ukrainian refugees were welcomed across borders, non-Ukrainian refugees from India, Pakistan, Syria, and the Ivory Coast — that is, people of color — were denied entry.

But perhaps what is most appalling is how discrimination is not simply palpable but plain. News correspondents from around the globe were quick to express their alarm over witnessing a humanitarian crisis not in “Iraq or Afghanistan” but in a “relatively civilized, relatively European city,” involving “prosperous, middle-class people” that “look like any European family.” As if conflict has its place only in Asia. Ukraine’s deputy chief prosecutor himself put it more bluntly, and was “very emotional” to “see European people with blue eyes and blonde hair being killed.” As if color were a measure for cruelty. As if skin set the standard for suffering.

Alas, in the field of international law, this is nothing new. In fact, structural racism is so deeply seated that, at times, it is easier to ignore it than address it. International law is historically whitewashed as Western creation through the Treaty of Westphalia of 1648, ignoring a rich history of Babylonian peace treaties dating back deep into the BCE. Reference to “civilized nations” has been too easily explained away as a relic of history, yet remains enshrined in no less than the Statute of the International Court of Justice. The United Nations trumpets itself as “the world’s only truly universal global organization,” yet is straitjacketed by the veto of five.

Double standards curry no favor. At least not in the long run. On the contrary, they leave international law vulnerable to the critique that justice is not blind, that rule is subordinate to whim, and that some are more equal than others. With normative dissonance amuck, can we honestly expect international law to be taken seriously by prince, pauper, or Putin?

Enough with the doublethink! If international legal order is truly about the rule of law, then let us ingrain it with consistency. And in so doing, perhaps we would imbue it with sincerity. Lest, we allow inconsistencies to bunch up into hypocrisies, leaving international law undermined in the big picture and fulfilled only in small patches.

This is by no means an admonition of the good that’s been done. The article is simply bright-eyed to the dangers of blue-eyed justice. It is a call for international law to be better than it is.

Every Thursday, this column will be dedicated to facing society’s inner demons in the hope of converting them. With more than just thoughts, but with just thinking.