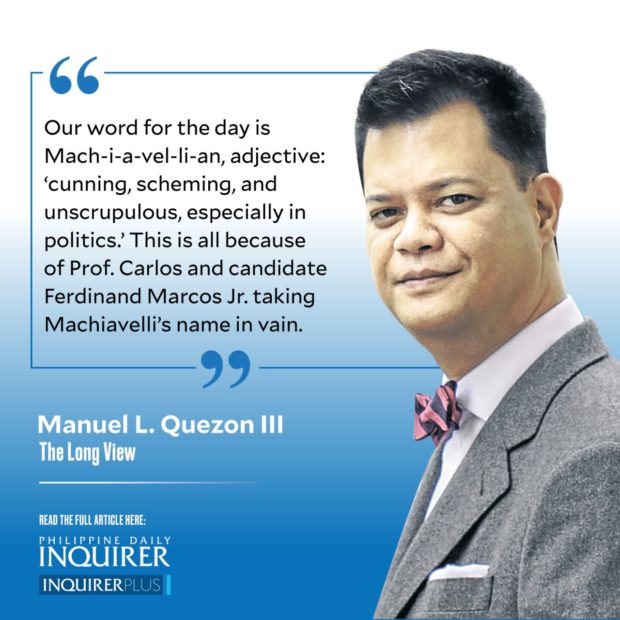 Our word for the day is Mach-i-a-vel-li-an, adjective: “cunning, scheming, and unscrupulous, especially in politics.” This is all because of Prof. Carlos and candidate Ferdinand Marcos Jr. taking Machiavelli’s name in vain.

It began on the pet network of the powers-that-be, when the professor asked the following question of the candidate, supposedly in aid of probing what, exactly, is the candidate’s leadership style:

The result, (according to Interaksyon, and my own transcribing) was an exchange that went like this:

Marcos Jr.: “Well, ah, the first question is if I’m an optimist, ah, or a pessimist. I’m essentially an optimist. And the reason I’m essentially an optimist, um, because especially when you talk about the country, I, we, we can, we are opti— I am optimistic because we are, our biggest asset is the Filipino people and I uh, it’s not, it’s not gonna, (applause) I uh, try to be very objective about it Ma’am I have traveled all over the world, I have not met a better people than Filipinos in every (cheering) every possibility. Uh, am I, am I risk taker or not, when it comes to national issues I um, tend towards the conservative only because a mistake will cause so much suffering to so many people in other words you have to be very careful with the decisions you make, and it’s not something you do off-hand, you think about it very hard, you talk to as many people as you can, and you make absolutely certain that you have have done everything that you can absolutely do, ah, to make whatever your plan is, to make it work. Am I Machiavellian? Well, I’ve studied him quite thoroughly, and I know very many Machiavellians in my life.” (Smile.) “But uhm, I… I…”

Marcos Jr.: “Well … ah, hee, hee, hee, certainly, we have to be, we have to be aware of everything that is going to help whatever it is that you are hoping to achieve. And as on national scale, that means you have to understand very well what the situation is on the ground. Ganito kasi ang sitwasyon ng mga tao, eh tanungin niyo sila… nasa gitna pa ng pandemya, walang trabaho ’yang mga ’yan, umaasa pa rin ’yan sa tupad … Sa [unintelligible] etc. O papano tayo lalabas niyan, where will be ano … what are the other countries doing? Kailangan maging maingat sa ano … so I suppose, uh, in the same sense as you save those questions for later, it’s a way of being careful and being very, very knowledgeable about what other things that have to come into play so that you will achieve success … whatever the success, however you will define success. So in that sense, yes ma’am, I am a Machiavellian.”

At which point Carlos plugged a book and tried to book a consultation.

I myself have enjoyed reading Machiavelli’s “The Prince,” and re-reading this book because like so many, I find passages from it very useful in reflecting on power. Take this passage that strikes close to home—I myself believe it should be paired with that marvelous photo of Ferdinand Marcos Sr. in 1986, dozing during a program, shielded by Ray-bans while FM Jr., wearing Wayfarers as people did in the late ’80s, was being fanned by a flunky as he sat beside dear old dad.

The passage goes like this: “Aside from lucky circumstances and positive qualities, there are two other ways a private citizen can become a ruler and we should include them in our discussion, though one of these would find more space in a book about republics. They are, first, when a man seizes power by some terrible crime and, second, when a private citizen becomes hereditary ruler with the support of his fellow citizens.” That is 1986 to 2022 in a nutshell.