Why Leni is picking up huge endorsements | Inquirer Opinion

Why Leni is picking up huge endorsements 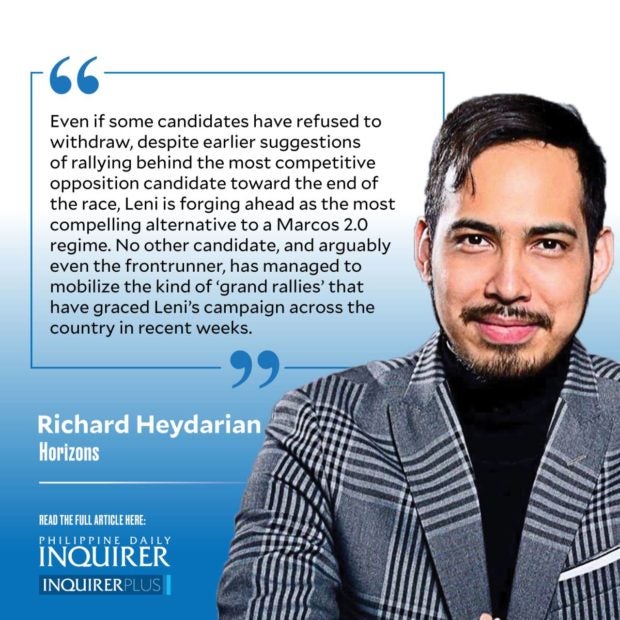 Over the weekend, Hungary held one of Europe’s most contentious elections in recent memory. Strongman populist Viktor Orbán, who has dominated the post-communist state in the past decade, aimed for his fourth consecutive term as Hungary’s prime minister. By and large, many observers took another Orbán victory, under his alt-right Fidesz party, as a foregone conclusion.

After all, the populist leader has managed to alter the very rules of the game in his favor. According to analysts, the country’s mediascape is dominated by state-led outlets, as well as oligarchic proxies, while electoral districts have been heavily gerrymandered to give disproportionate representation to administration supporters. In fact, Freedom House, a leading think tank, doesn’t even categorize Hungary as a full-fledged democracy.

Nevertheless, the opposition managed to give the ruling party a tough fight heading into the elections. Last year, their Czech counterparts booted out the right-wing populist Andrej Babis by, according to the New York Times, “put[ting] ideological differences aside and joined together to drive out a leader they fear has eroded the country’s democracy.” This inspired the creation of the “United for Hungary” coalition, which consolidated a wide array of liberal, socialist, green, and even conservative parties under a single ticket.

Thus, in both the Czech Republic and Hungary, as in other besieged democracies, a cross-ideological opposition coalition heroically built a united front against a budding autocrat against all odds. Now, contrast that to the Philippines, where half-a-dozen opposition candidates are challenging a well-oiled and popular “UniTeam Alliance,” which is composed of the two pillars of illiberal politics in the Philippines.

This largely explains why the ex-dictator’s son, having rallied both the loyalist “Solid North,” as well as pro-Duterte “Solid South” votes behind him, enjoys a commanding lead in the surveys. Nevertheless, Vice President Leonor “Leni” Robredo has been racking up endorsements right and left, including from pro-administration stalwarts.

I believe there are three reasons behind this seemingly paradoxical situation. To begin with, Leni has emerged as the pre-eminent leader of the opposition, especially as other opposition-wannabe candidates lost steam. Even if some candidates have refused to withdraw, despite earlier suggestions of rallying behind the most competitive opposition candidate toward the end of the race, Leni is forging ahead as the most compelling alternative to a Marcos 2.0 regime.

No other candidate, and arguably even the frontrunner, has managed to mobilize the kind of “grand rallies” that have graced Leni’s campaign across the country in recent weeks. As the race enters its final stretch, she has had no shortage of passionate volunteers and devoted donors. Clearly, the enthusiasm level behind her presidency is reaching new heights.

Second, fault lines are beginning to appear within the ruling coalition. The so-called “Solid South” in Mindanao has clearly closed ranks behind its vice-presidential contender, namely former Davao mayor Sara Duterte. But the same voting bloc is clearly not that “solid” behind Ferdinand Marcos Jr.

On one hand, many folks from Mindanao, including the current president, believe that Sara, who led pre-elections presidential surveys, should have instead run for the highest office. Moreover, many remember the darkest days of martial law, which saw destructive wars and brutal repression across Mindanao. Not to mention, no less than President Duterte has described the current frontrunner, who is running on the (largely imaginary) achievements of his forebears, as a “weak leader.”

Finally, there is the question of surveys. Historically, authoritative polling agencies such as Pulse Asia and Social Weather Stations have done an impeccable job of correctly projecting the likely winners in previous high-stakes races, including Leni’s victory in the tightly contested 2016 elections. They are, after all, bastions of institutional integrity and professional independence.

In our unprecedented climate of fear, disinformation, and polarization, however, even the best surveys may have some limitations. Clearly, normal dynamics of electoral contestation have been thrown out of the window. And there are millions of voters, including first-time voters, who are likely still struggling to make up their minds amid the thick fog of confusion and calumny. This means, there could be large numbers of “bandwagoners” and undecided voters who could still change their minds in the coming weeks. Thus, the actual race could be far more competitive than macro-surveys suggest.