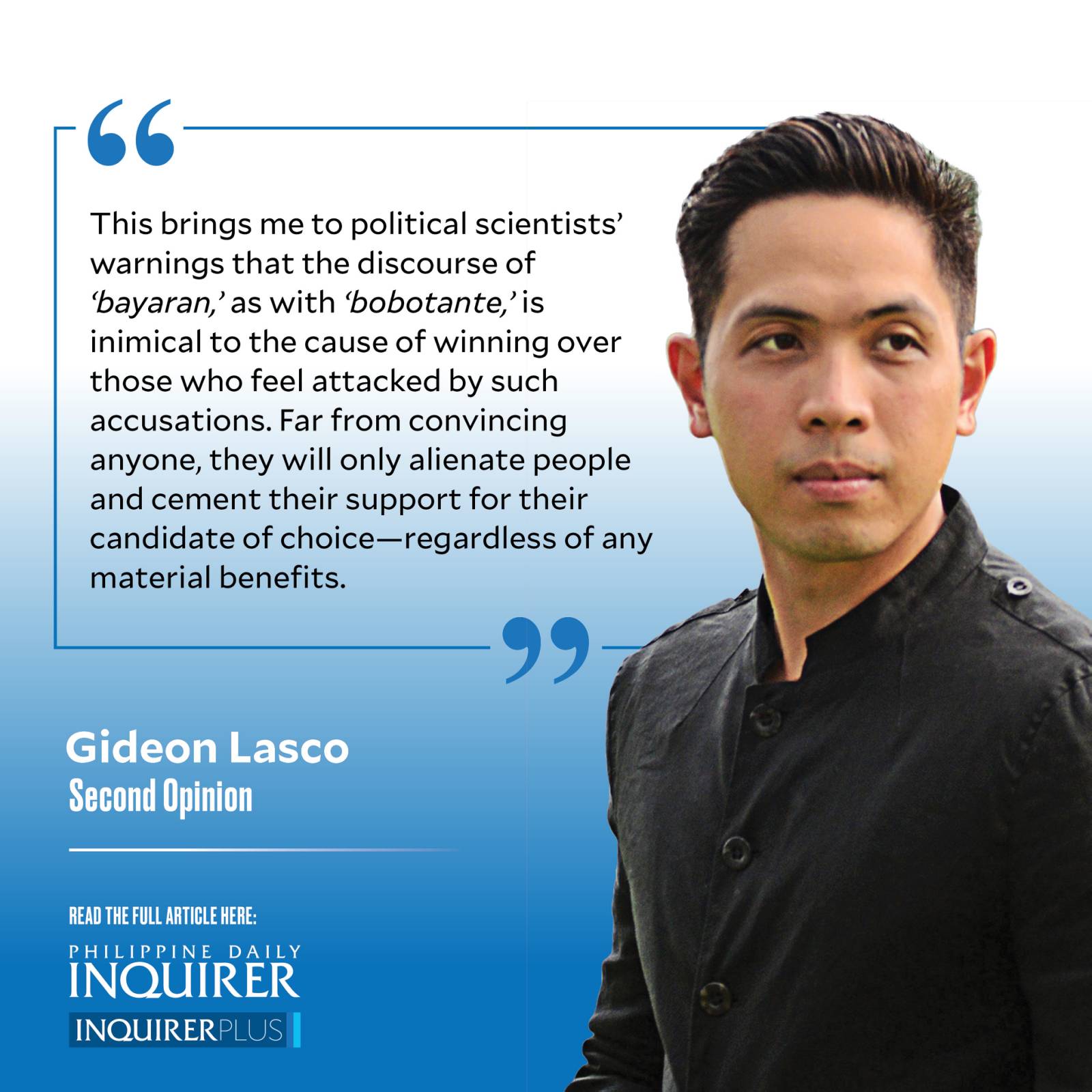 “The poor… are presumed to be desperate, short-sighted, and lacking in moral or political discernment … these ads assume that the poor participate in elections simply as a way to come into some fast money without regard to their self-respect or long-term well-being, let alone the well-being of their communities. They literally ‘sell’ their votes.”

The above quote by the political scientist Frederic Schaffer (2002) was written two decades ago, but it could have been written today, as the stereotypes of “bobotante” (a portmanteau of the words “bobo,” stupid, and “botante,” voter) and “bayaran” (literally “paid person”) continue to figure in public discourse on what ills our electoral system.

These stereotypes are by no means held by everyone (the image of clueless, Hermès-clutching, kakampink elitists congregating in Wildflour is a stereotype in itself; a misrepresentation of both the heterogeneity of Vice President Leni Robredo’s supporters and the diversity within the so-called “middle class”). But their undeniable existence today, nonetheless, speaks of the need to more forcefully refute them, not just because they are inaccurate but because they are inimical to the cause of reforming our political system.

They are inaccurate because, in the first place, they do not even reflect the electoral reality. In fact, President Duterte won more heavily among Class ABC in 2016—than the “masa” for whom such stereotypes are most often ascribed.

Moreover, they lack a nuanced understanding of how many Filipinos view politics. As Schaffer averred in the same paper, “To many of the better-off, good politics is the clean politics of issues, transparency, and accountability, while to the many of the poor it is a politics in which candidates and officials treat the common people with dignity and kindness.” Held in the lens of what the sociologist Wataru Kusaka (2018) calls “moral politics,” people are not acting ignorantly as the label “bobotante” assumes they are; they are just using a different criteria for judging candidates.

Of course, this is not to deny the impact of disinformation, both online and offline; the fact that the martial law years continue to be perceived as a “golden age” speaks of the salience of countering fake news. However, it is also important to recognize that, oftentimes, the goal of such propaganda is not so much to establish a candidate’s credentials, but the virtues that people are looking for (e.g. kindness and empathy). Hence, Bongbong Marcos’ preference for simplistic appeals to unity that would bolster the latter—instead of participating in debates that would burnish the former.

As for people being “bayaran,” it is far more complex than the simple monetary transaction imagined by many. Indeed, the scholarship finds that vote-buying is embedded in longer-term relationships of patronage, and significantly, that it seldom changes people’s preexisting preferences. Economist Tristan Canare and colleagues (2018) note in an empirical study conducted in Metro Manila, “Most (94 percent) of those who said that they voted for the candidate did so because of the candidate’s qualifications and only 17 percent because of the offer, indicating that they probably would have voted for the candidate anyway.” However imperfect, one analogy we can use is children expecting money from their ninongs and ninangs—but will get offended by the suggestion that the only reason for their visit is the money.

This brings me to political scientists’ warnings that the discourse of “bayaran,” as with “bobotante,” is inimical to the cause of winning over those who feel attacked by such accusations. Far from convincing anyone, they will only alienate people and cement their support for their candidate of choice—regardless of any material benefits. This is especially true for many Filipinos who are sensitive about their lack of education or financial means. As the social scientist Michael Pinches (1992) put it 30 years ago in words that—like Schaffer’s—still resonate in our time:

“What matters most to people … is the way others attribute or deny value to them as human beings. It is primarily in this context that wealth differences are to be understood. Indeed, it is the common burgis [bourgeois] tendency to portray the lives of the poor purely in terms of material deprivation that people … find so degrading and shaming. Seen as eking out a bare hand-to-mouth existence, they are effectively denied their own humanity and culture.”

Candidates and their supporters will do well to heed these words as we enter the final weeks of perhaps the most consequential election season of our generation.