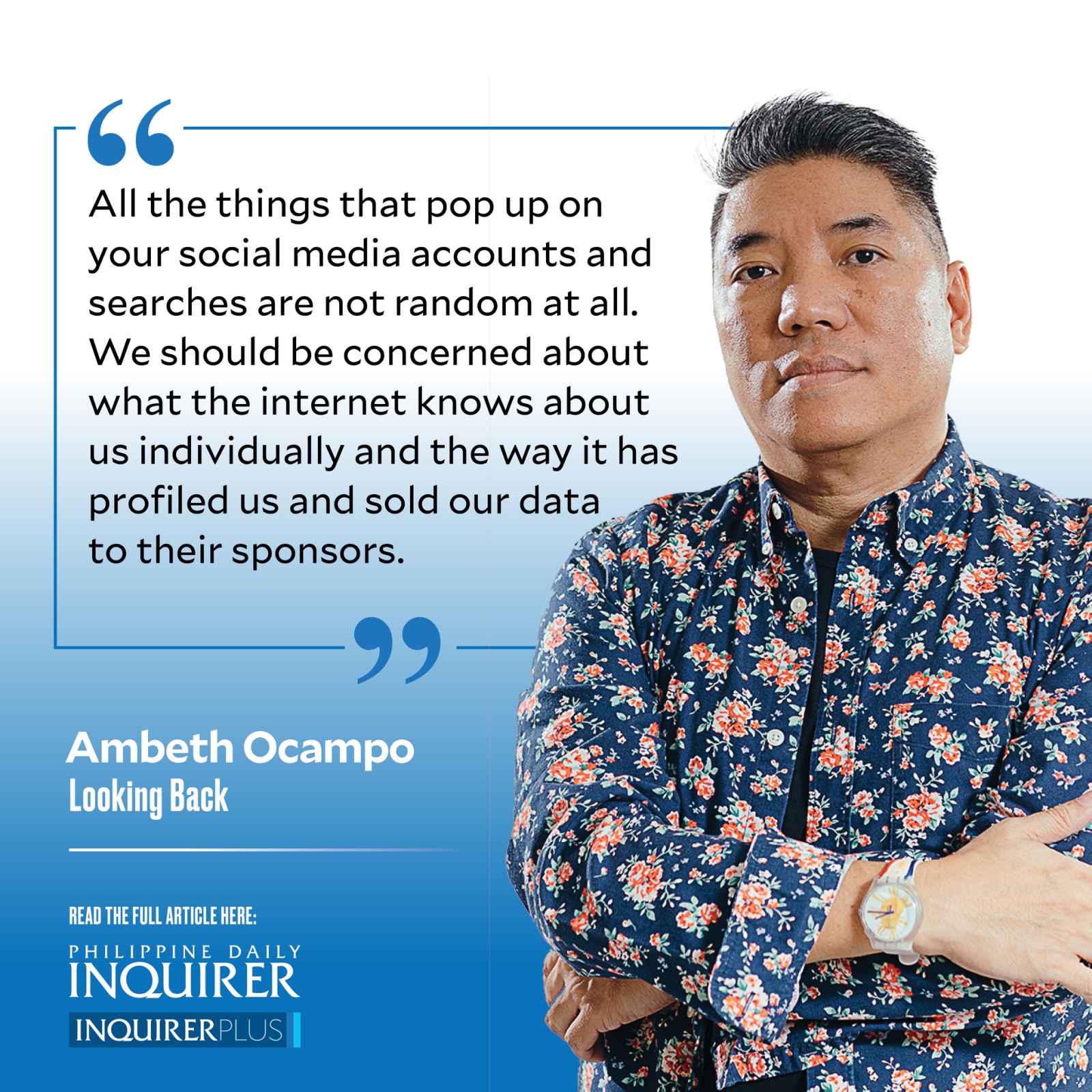 It started when Gmail drafted replies to messages in my Inbox. Knowing that Google was reading my mail made me realize it was tracking my Google searches, tracing what I watched on YouTube or Netflix, trailing podcasts and music I listened to on Spotify, snooping on my views and buys on Shopee or Amazon. Piecing together all this gathered information, an algorithm kicked in and curated content I am supposed to be interested in. All the things that pop up on your social media accounts and searches are not random at all. We should be concerned about what the internet knows about us individually and the way it has profiled us and sold our data to their sponsors.

The past few days I received many unwelcome video recommendations for BBM speeches and rallies, conspiracy theories on the Ninoy Aquino assassination, and even the fabled Tallano gold. The political ads I delete and report as spam, but the conspiracy theories and Marcos gold I report as fake news and hope these are taken down. Fake news is as old as history but has been given new life and spin by the internet and social media. When asked how to stem the tide of fake news online, I often say we should go back to reading physical books and researching in archives and museums. My notebooks are filled with stray data, waiting to be organized and retold.

Take the real Hospicio de San Jose, founded in the 18th century, that moved from place to place until 1810 when it settled on the Isla de San Andres on the Pasig, later renamed the Isla de Convalescencia. Hospicio, when I last visited in 1980, housed orphans and the aged. It was then accessible through a small road from Ayala Bridge. Patients from San Juan de Dios hospital in Intramuros were sent here for quarantine in the 19th century, and it later became an asylum where the mentally ill were consigned like broken furniture. Part of the Hospicio’s long history can be gleaned from the bundles marked “Dementes” (insane) in the Philippine National Archives. In the documents I consulted, the Hospicio was a prison island with better facilities than Bilibid that also maintained cells for the insane, particularly violent criminals.

In the Dementes bundle were printed forms routinely filled out by the Hospicio director each time a patient escaped. This request for the arrest and detention of a patient was sent to the Civil Governor of Manila. Unfortunately, we have no photos of the inmates but detailed physical descriptions written out like: Braulio Vergara, escaped at 7 p.m. on Oct. 2, 1894, 32 years old, tall, dark, with a regular nose, and wearing a striped shirt and blue pants. Another was Alfonso Raga of Santa Cruz, Laguna, who escaped in 1895, he was described as being 14 years old, regular build and nose, dark complexion, round face, wearing white pants and a camisa de chino, no shoes, no hat, but speaks perfect Spanish.

I’m sure if I am more patient I will find documents that will give a full history of someone’s madness and from it, we can draw a picture of both the patient and his world.

My notebooks have many references to people branded as madmen by the authorities but looked up by people as saviors of the country. One such person was Ruperto Rios who was active in Tayabas in the early 1900s. He promised paradise to those who believed in his claims as a generalissimo and Hijo de Dios (Son of God). As a military leader, he won converts by giving away commissions arbitrarily such that at one point he had one captain-general, one lieutenant-general, 25 major-generals, and 50 brigadier-generals! One wonders what kind of army it was where almost everyone was an officer. As Son of God, he heard confessions and charged less than the Catholic priests. He had a thriving anting-anting business that, according to a report by Harry Bandholtz, head of the Philippine Constabulary, “did not prevent many of his followers permanently retiring from business, owing to being perforated by constabulary bullets.”

Rios’ greatest trick was carrying around a box marked with the word “Independencia.” He promised his followers that when he released Independence from the box, there would be no more taxes and jails. Everyone could do as they pleased. Re-reading all these accounts in the face of online conspiracy theories and counterfactuals made me wonder if people like Rios were truly mad or misunderstood visionaries.