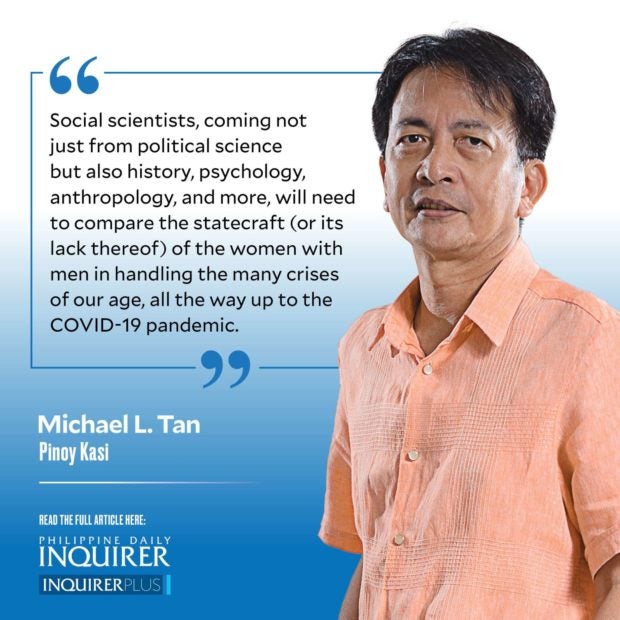 Local universities and colleges with strong women’s programs should get together to develop a course on women and statecraft, meaning the crafting of strategies and tactics around governance and leadership, diplomatic relations, the military.

With the current election campaigns, we hear too often people reducing leadership to a matter of “firmness,” and using the Filipino katapangan, which I actually see as a characteristic of weak leadership.

I thought about this need reading recently about two women who can be said to be masters of statecraft. One was Madeleine Albright, the first woman to become the US Secretary of State, serving from 1997 to 2001, with many achievements in diplomacy, notably the Kosovo crisis. Albright was also a professor producing many insightful books including “Fascism: A Warning,” first published in 2018 and taking on greater relevance with the passage of time. She passed away last Wednesday.

The other was Angela Merkel, who served as Germany’s chancellor from 2005 to 2021, the first woman and the youngest ever to assume that post, going on to become the second longest serving chancellor. She navigated Germany, and western Europe, through several storms, including the Eurozone debt crisis, Russia’s invasion of Crimea, and the refugee crisis, with her controversial decision to accept a million of them into Germany.

Both were exemplars of statecraft with strategies and tactics that were distinctly “female,” and I use quotation marks to emphasize that I do not believe these were the result of being biologically female but of being women in a world still dominated and, often enough, made worse by men.

I’m going to pick on what might seem like trivia from these two leaders but which reflect aspects of women’s statecraft.

I start with the stories about Albright’s use of pins, yes decorative brooches, to deliver subtle but strong, even defiant, political messages.

Her first use of political brooches was in response to Iraq, during the time of Saddam Hussein’s invasion of Kuwait. She was the US ambassador to the United Nations at that time and had been delivering fierce attacks on Hussein, prompting Iraqi media to call her “an unparalleled serpent.”

Albright showed up one day for a UN Security Council meeting wearing a brooch with a serpent, catching media attention and encouraging her to start using more of these pins. There were so many of the pins, from antique shops and flea markets, and others received as gifts, that the Smithsonian put up a special exhibit of her collection of 200 pins in 2010.

At a meeting with Russian President Vladimir Putin during the Chechnya crisis, she wore a brooch showing three monkeys: hear, see, and speak no evil. Putin asked her about the monkeys and she said they referred to his policies around media coverage of Chechnya. In a media interview, she recalled: “He was not amused. I probably went too far.”

I will only have one story about Merkel, and recalling an encounter with Putin from the latest New York Review of Books featuring a new book, “The Chancellor: The Remarkable Odyssey of Angela Merkel.”

Putin, a former KGB (Russian secret service) agent, was always playing power games with his visitors. With Merkel, who was known to be afraid of dogs, he intentionally called out his huge Labrador to come into the room during one of their meetings during Merkel’s state visit to Russia. Merkel kept her calm and turned things around, recalling the incident to a group of reporters: “I understand why he has to do this—to prove he’s a man … He’s afraid of his own weakness. Russia has nothing, no successful politics or economy.”

A course on women and statecraft would be so important for Filipinos to better understand women at the helm, given we’ve had two women presidents and many other women political leaders, diplomats, ambassadors. (Conspicuously absent, though, are women as military leaders.)

Social scientists, coming not just from political science but also history, psychology, anthropology, and more, will need to compare the statecraft (or its lack thereof) of the women with men in handling the many crises of our age, all the way up to the COVID-19 pandemic. I hope, too, we will have more women doing the analysis, to explain a women’s perspective in statecraft.