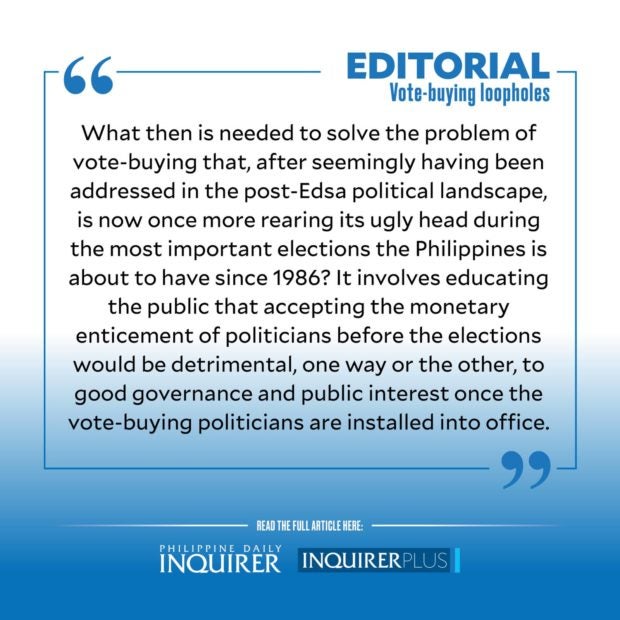 “Each vote is important, so important that it is sought, bought or even stolen. Our vote is our voice and decision. When we sell our vote, we lose our voice and our decision. It is like giving up our freedom and our future.”

Thus said Catholic Bishops’ Conference of the Philippines president and Caloocan Bishop Pablo Virgilio David in a pastoral letter on the 2022 elections issued by the influential church group last Sunday.

This letter comes on the heels of reports of alleged vote-buying perpetrated by officials allied with personalities running for national office in what is probably the most consequential electoral exercise in the country’s recent history.

At least two incidents of what looks like vote-buying has been documented by media in recent weeks. But in both cases, the people behind them — local government officials who were involved in mass gatherings that were later attended by national candidates — reasoned that their action of handing out cash to individuals did not constitute violations of electoral laws.

In one case, Nueva Ecija Gov. Aurelio Umali reasoned that the cash handouts of P500 to people present in a political rally was actually financial assistance granted by the local government to constituents (presumably as part of the practice of giving “ayuda” that has become standard practice since the outbreak of the COVID-19 pandemic).

In the second incident, Cavite Gov. Jonvic Remulla handed out cash prizes to local residents participating in games during a rally that would later be attended by UniTeam candidates.

In both cases, the officials explained that their actions were not considered vote-buying under the letter of the Election Code, which prohibits the giving, offering, or promising of money or anything of value “to induce anyone or the public in general to vote for or against any candidate.” Remulla pointed out that the campaign period for local candidates has not started yet when he gave out money, thus he is not in violation of the law.

Brought to the attention of the Commission on Elections (Comelec), poll body officials urged complainants to file a formal case against the alleged violators, assuring them that complaints found to have sufficient basis and backed by solid evidence would be acted upon.

Predictably, no one has yet to file a formal complaint.

The Comelec recently formed a task force to investigate these claims, adding that it can initiate complaints by itself even without the prompting of external complainants. But the message has already been sent out to the public, whether intended or not, that addressing vote-buying is practically just an afterthought for the agency.

On closer examination, it may just be that certain candidates and their supporters are successfully exploiting loopholes in the country’s laws against vote-buying to obtain the same ultimate effect on voters — gain their favor at the ballot box on May 9 in exchange for monetary considerations — without actually breaking them.

With even the most basic comprehension of legal procedures, one could see how complaints against the two highlighted incidents — and we suspect there are probably more that have not been documented — would collapse once they run up against smooth-talking lawyers and the most thorough of legal minds. Not to mention if the national candidates in the vote-buying episodes win in the polls!

These alleged incidents may not be vote-buying under the letter of the law, but they most certainly contravene its spirit.

It may not hold water in a court of law, but handing out P500 or P50 to an impoverished constituent who was bussed to a political event to hear candidates’ speeches that are chockfull of sweet sounding promises (snacking on food and being entertained by celebrities while waiting for the main candidate to arrive) is vote-buying plain and simple.

What then is needed to solve the problem of vote-buying that, after seemingly having been addressed in the post-Edsa political landscape, is now once more rearing its ugly head during the most important elections the Philippines is about to have since 1986?

It is a complex issue that involves, ultimately, addressing poverty and educating our people better. But in the near term, it involves having our lawmakers update the country’s election laws to expand the definition of vote-buying to plug loopholes and omissions currently being exploited by candidates and their supporters.

Strengthening our electoral and democratic processes means improving — even tightening — the standards for and guidelines on the appointment of Comelec officials to eliminate potential conflicts of interest that plant the seeds of doubt in the public’s mind about their actions or inaction as stewards of the electoral process.

And finally, it involves educating the public that accepting the monetary enticement of politicians before the elections would be detrimental, one way or the other, to good governance and public interest once the vote-buying politicians are installed into office.

Without these reforms, it’s as if we will just allow vote-buying en masse and sit idly by as our democracy regresses back to the bad old days of guns, goons, and gold.