Throwing the book at Badoy 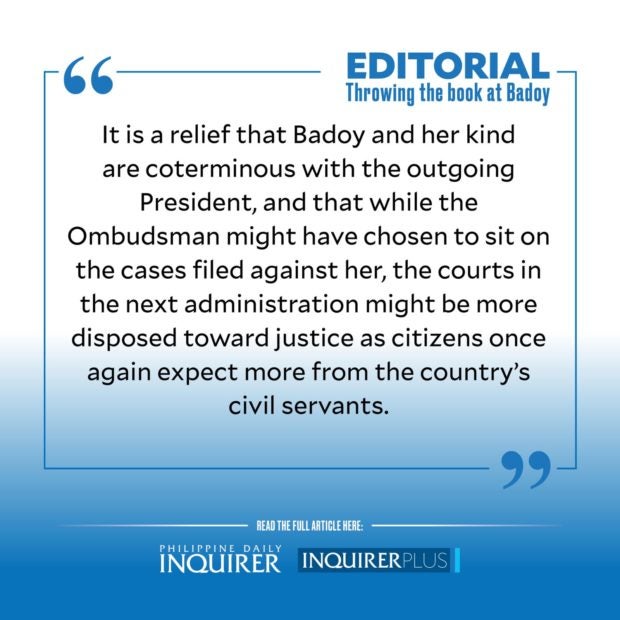 Four separate complaints were filed last week before the Ombudsman and the Commission on Elections (Comelec) against Undersecretary Lorraine Badoy of the Presidential Communications Operations Office in Malacañang, for her persistent Red-tagging of militant groups and opposition leaders. Badoy is also one of the spokespersons of the National Task Force to End Local Communist Armed Conflict (NTF-Elcac).

Three of the complaints, filed separately by 26 individuals, charged Badoy with violating the anti-graft law and the code of conduct for public officials and urged Ombudsman Samuel Martires to suspend Badoy. They cited Badoy’s March 13 post on the NTF-Elcac Facebook page where she accused the camp of Vice President Leni Robredo of forming a “tactical alliance” with the “communist terrorist” Communist Party of the Philippines/New People’s Army (CPP/NPA) to win the presidential elections in May. Robredo’s spokesperson Barry Gutierrez denied the accusation.

The second complaint was filed by members of the Alliance of Concerned Teachers (ACT), which the NTF-Elcac accused of being a CPP/NPA front. The group called out Badoy’s social media posts as filled with “disinformation, misinformation, fake news, and slanderous.” The Red-tagging has led to the arrest last year of Ophelia Tabacon, former president of ACT Northern Mindanao, who was detained for more than a year on charges of arson, kidnapping, and robbery with violence along with several human rights activists in Agusan del Sur. The cases were dismissed in December 2021 after a judge quashed the warrants of arrest. But the damage had been done—Tabacon was forced to file for early retirement and had to move away from her six children to protect them.

The third complaint was filed by youth leaders from various universities.

Back in February 2020, the research group Ibon Foundation filed a similar case against Badoy, then NTF-Elcac spokesperson Lt. Gen. Antonio Parlade, and National Security Adviser Hermogenes Esperon Jr. Lawyer Rico Domingo said the Ombudsman, an appointee of President Duterte, has been “sitting” on the case.

Another set of complaints was filed last week at the Comelec by the Makabayan bloc in Congress, accusing Badoy of violating the Omnibus Election Code by Red-tagging or linking the group and Robredo to the outlawed CPP/NPA to derail their respective election campaigns.

In her defense, Badoy said the NTF-Elcac was determined to end the 53-year-old communist insurgency by “speaking the truth about politicians who form unholy alliances with the CPP-NPA-NDF (National Democratic Front), and who lend material support” to the insurgents.

The problem with this sweeping accusation is the absence of any evidence to prove that these opposition figures and groups critical of the government are fronts or members of the outlawed CPP/NPA.

In its 2020 scathing report on the widespread killings and dismal human rights situation in the Philippines, the United Nations Office of the High Commissioner for Human Rights noted the “the phenomenon of ‘Red-tagging’”—labeling individuals or groups (including human rights defenders and nongovernment organizations) as communists or terrorists—has posed a serious threat to civil society and freedom of expression.” In March 2021, it cited the killing of nine activists who were Red-tagged in Calabarzon. Human rights group Karapatan reported that at least 318 activists who were Red-tagged had been killed.

The roster of personalities Red-tagged by the NTF-Elcac has so far included Robredo, Baguio City Mayor Benjamin Magalong, celebrities Angel Locsin and Liza Soberano, Miss Universe 2018 Catriona Gray, and Patricia Non, the celebrated founder of the Maginhawa community pantry that became a nationwide movement serving thousands of people with food and basic necessities at the height of the pandemic, when the government fell short of providing help for the needy. It is the height of incredulity to think that these personalities are engaged in armed insurgency as Badoy et al. would like the public to believe.

Last week, the façade of two revered bookstores was spray-painted with “NPA terrorists,” presumably by the same trigger-happy group. One of them, Popular Bookstore, has been known for contributing to the free marketplace of ideas with its trove of books written by Marxist authors. Solidaridad, owned and managed by the late National Artist for Literature F. Sionil Jose, was meanwhile a favorite hangout of artists and writers where they freely discuss their counterculture ideas.

Badoy and her ilk, who are paid with taxpayer money, arrogantly believe themselves above the law as they flout the basic rules of decency and delicadeza with their unproven and dangerous Red-tagging. It is a relief that she and her kind are coterminous with the outgoing President, and that while the Ombudsman might have chosen to sit on the cases filed against her, the courts in the next administration might be more disposed toward justice as citizens once again expect more from the country’s civil servants.