The appeal of empty shells 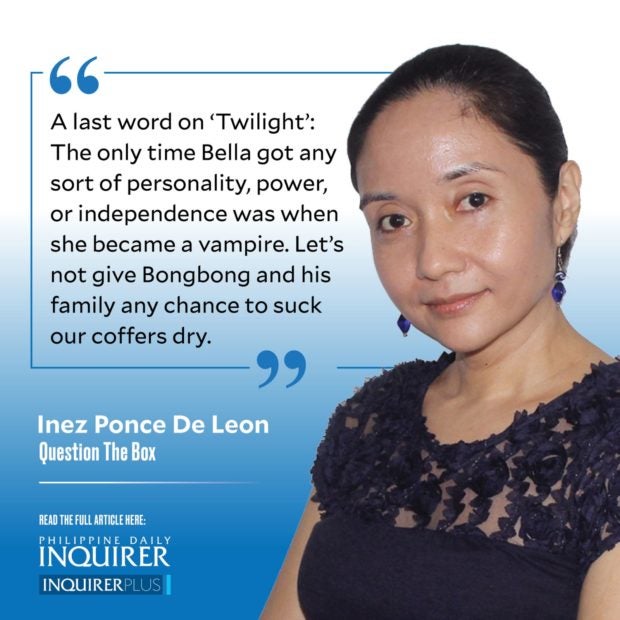 There are two major lessons that I carry today from both my English teachers and fiction writing workshops. First: create characters whose past shapes their appearance, dreams, and action. Describe them vividly through how they talk and behave. Show; don’t tell.

Second: make your characters respond to conflict. They can win and be better; or they can lose, and the reader still learns something about the nature of the human experience.

Many classics have such conflict-wrestling characters: Silas Marner is a miser who develops into a loving father figure, Jean Valjean is a juvenile thief who turns his life around even as an old rival keeps hounding him, Elizabeth Bennet and Jo March rebel against gender norms.

There are exceptions on the best-sellers list. One much-maligned character is that of Bella Swan from the Twilight series.

Stephenie Meyer, the author of the books, admitted in interviews that she did not describe Bella in detail so that readers could imagine her in whatever way they wished. This is a technique some authors use to immerse readers further in a story so that readers can imagine themselves walking in the world created by the writer.

Bella Swan, however, is not just faceless. For a great part of the series, her personality remains flat. She is an “informed” character: The reader is told to believe that she is kind, clumsy, family-oriented—but there is little evidence to show that these are true. She has no skills to develop, and she is placed in a story where she has no conflict apart from those associated with romantic relationships (picking between two boys who like her, pining for a vampire).

Many “Twilight” fans loved the character: Bella felt like them, as they sought their own direction, tried to wade through the confusion of their teenage years, fantasized about being loved by two boys. Despite the defense of fans, however, Bella Swan is the kind of character that belongs in books, and the kind of character whose popularity and appeal should be questioned. What makes this character likable? Who is this person, apart from what is said about them? Do I want my own children to be like her: a person who drifts through life, reacts to everything, has no real initiative?

Such is the draw of empty shells.

And perhaps, such is the draw of Bongbong Marcos.

We are constantly informed that he is smart, a nerd, accomplished; that he has no real past to consider; that he will build a future based on unity. But he has no track record to present, no programs in which he is invested. His family owes billions of pesos in taxes to the Philippine government, but he always portrays himself as the victim that must accept his trials—by doing nothing.

Because he has no distinct personality, he is whoever his followers want him to be. He can take on whatever identity a follower wishes to insert into him. He has neither spark nor fight; he is a blank slate, a bucket to be filled, a shell always waiting to react to something.

Like an empty character, he simply lets everyone do the job for him.

Unlike the world of literature, however, we have reminders in our history and reality that tell us to open our eyes. Martial law saw people starving to death, begging in the streets, fleeing the country. Our elections today show us candidates with actual credentials, who have demonstrated that their promises can be turned into reality, who have actual personalities that stand against the criticism and fake news—who can write the story of this country with all of us, instead of waiting for someone to save them.

A last word on “Twilight”: The only time Bella got any sort of personality, power, or independence was when she became a vampire.

Let’s not give Bongbong and his family any chance to suck our coffers dry. He is a character that deserves to live in books to be criticized, not in a government that must work for the good of the people.