History is a circle | Inquirer Opinion

History is a circle 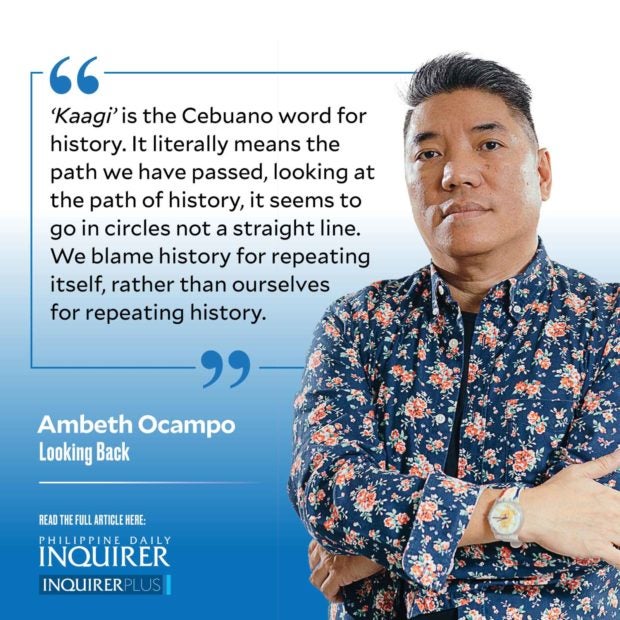 When we were growing up, my mother blamed my father’s genes for anything wrong in her children like allergies, crooked teeth, and the beginnings of a Kapampangan accent. Everything praiseworthy, on the other hand, like dexterity, good looks, or high grades naturally came from her or her side of the family. Another blame game played out in Araling Panlipunan where Filipino negative traits are blamed on the Spanish, American, and Japanese colonial periods. Recently, Ferdinand Marcos Sr. is the scapegoat of choice. Looking back on the evils of martial law, it is easy to pin the blame on Marcos rather than asking—what was it with the Filipino of the 1970s that made martial law possible?

“Kaagi” is the Cebuano word for history. It literally means the path we have passed, looking at the path of history, it seems to go in circles not a straight line. We blame history for repeating itself, rather than ourselves for repeating history. Four hundred and fifty-three years ago in Cebu, Miguel Lopez de Legazpi wrote out a report to the king describing the natural and human resources of the Philippines as a first step toward their exploitation. I was struck by his description of lawlessness:

“The inhabitants of these islands are not subjected to any law, or king, or lord. Although there are large towns in some regions, the people do not act in concert or obey any ruling body; but each man does what he pleases, and takes care only of himself and of his slaves. He who owns most slaves, and the strongest, can obtain anything he pleases. No law binds relative to relative, parents to children, or brother to brother.”

Elsewhere the underside of utang ng loob was described:

“No person favors another, unless it is for his own interest; on the other hand, if a man in some time of need, shelters a relative or a brother in his house, supports him with food for a few days, he will consider that relative as his slave from that time on, and is served by him. They recognize neither lord nor rule; and even their slaves are not under great subjection to their masters and lords, serving them only under certain conditions, and when and how they please … When these people give or lend anything to one another, the favor must be repaid double, even if between parents and children, or between brothers. At times they sell their own children when there is little need or necessity to do so.”

Natives have a natural attraction for robbery and deceit:

“Whenever the occasion presents itself, they rob one another, even if they be neighbors or relatives; and when they see and meet one another; in open fields or at nightfall, they rob and seize one another. Many times it happens that half of a community and the other half are at war, and they assault and seize one another; they don’t have any order or arrangement in anything. All their skill is employed in setting ambuscades and laying snares to seize and capture one another, and they always try to attack with safety and advantage to ourselves.”

Legazpi recommended using their disunity against them:

“I believe that these natives could be easily subdued by good treatment and display of kindness; for they have no leaders, and are so divided among themselves and have so little dealing with one another—never assembling to gain strength, or rendering obedience to one another. If some of them refuse at first to make peace with us, afterward, on seeing how we treat those who have already accepted our friendship, they are induced to do the same. But if we attempt to subdue them by force of arms, and make war on them, they will perish, and we shall lose both friends and foes; for they readily abandon their houses and towns for other places, or precipitately disperse among the mountains and uplands, and neglect to plant their fields. Consequently, they die from hunger and other misfortunes. One can see proof of this in the length of time it takes them to settle down again in a town that has been plundered, even if none of them has been killed or captured. I believe that by peaceful and kindly means, they will be easily won over, although it may take some time to do so … the country is not yet sufficiently settled and secured … when this is so, they will be subdued and will do whatever is justly commended them.”

Filipinos have not changed much in the last 450 years. The real challenge of history is breaking the cycle, so the present will stop reading like the past.