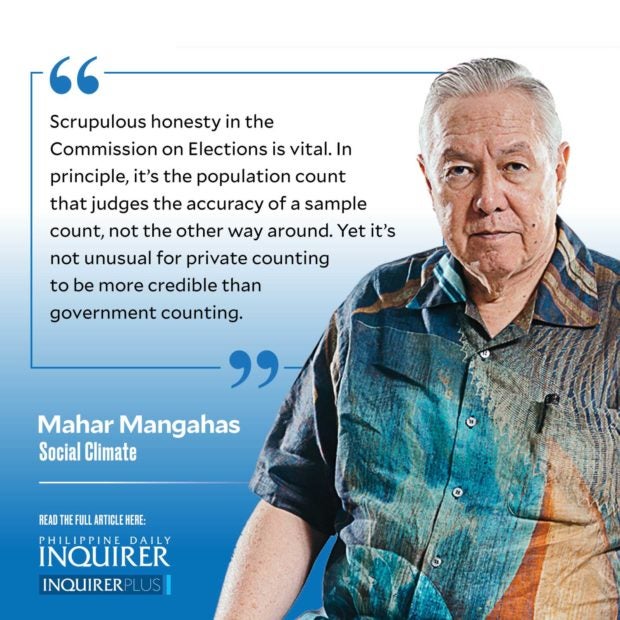 Social Weather Stations has a website, www.sws.org.ph, for all its public reports, including surveys of voting intention, if any. As of now (3/17/22), its only items pertinent to the 2022 election are from a Stratbase ADR Institute commission to include preferences for vice president and for senators in the October 2021 SWS survey; these were posted on 11/25/21 and 11/16/21.

SWS had at least one media sponsor in every election from 1992 to 2016. It so happens that SWS had no media sponsor in 2019, and has none in 2022 (so far). It does not lack for work to do; its main mission is monitoring the quality of life, not predicting elections.

Media sponsorship of election polling is the tradition in democratic countries. Social science research is indebted to media sponsorship for the resulting treasure of data, which should be archived, as SWS does, for future use.

SWS has an extensive election survey track record—see “Do polls influence elections?” by Leo S. Laroza, presented at the 2017 Asian Conference for Political Communication in Singapore on the webpage. It includes not only preferences for candidates but also the extents of bandwagoning, underdogging, tactical voting, conscience-voting (while taking the money), command voting, political machinery versus popularity, vote-decision time, and so forth.

Survey timing is the key to successful election prediction. The famous 1948 survey fiasco on the Dewey-Truman presidential race, after careful investigation by the American social science community, was attributed to ending the media polls too soon and thus missing the final moods of the electorate. The lesson for survey rookies seeking credentials is to aim for a final round just before election day.

In early 1987, conscious of the May 11th senatorial election, and having funds for a single survey round in the first semester that year, the SWS-Ateneo de Manila University opinion poll project committee had to decide on fieldwork timing—as early as possible, for maximum relevance to the campaigns, or as late as possible, for maximum chance of success in predicting the outcome?

The SWS-ADMU poll was fielded on Feb. 24 to March 21, 1987. It found a tied score of 12-12 between Cory and non-Cory candidates for the 24 senate seats at stake. With the election only 51 days away—as close as we are now to election day of 2022—the Cory campaign team, under Paul Aquino, had to work overtime.

I don’t know exactly what they did, aside from bringing out President Cory Aquino to personally raise her candidates’ hands. At any rate, the final score was a resounding win of 22-2, with Joseph Estrada and Juan Ponce Enrile as the only two opposition survivors. (Predictably, the SWS-ADMU poll was later criticized “for wrongly forecasting the election!”)

Lesson from 1987 to campaigners: 51 days is enough time to change the course of an election race.

What election surveys can and can’t do. It takes not just a few, but several surveys to understand a race’s dynamics. All the more is it important to have a sponsor with financial muscle.

A survey doer’s control covers the design of the questionnaire, scientific sampling of respondents, field interviewing, data processing, and report writing. But what can she do about the social environment of the respondents—their fear of partisan retaliation, their internalization of political history, and the insidious poisoning of their social media by trolls?

Scrupulous honesty in the Commission on Elections is vital. In principle, it’s the population count that judges the accuracy of a sample count, not the other way around. Yet it’s not unusual for private counting to be more credible than government counting. Its treatment of then-Commissioner Rowena Guanzon did not inspire confidence that the Comelec is entirely non-partisan.

SWS and its sponsors have had to struggle with the Comelec all the way to the Supreme Court, to ultimately gain the high court rulings that exit polling (GR 133486, 1/28/2000) and pre-election polling without blackout (GR 147571, 5/3/2001) are both protected by the constitutional right of free expression.

There is much room for old-fashioned parallel counting by trustworthy groups like Namfrel (National Citizens Movement for Free Elections), assisted by others like Lente (Legal Network for Truthful Elections) and PPCRV (Parish Pastoral Council for Responsible Voting). The voting-machine-counting has lessened the drudgery for the teachers at polling places but is still a black box needing inspection at every turn. I also favor a stricter, more transparent random manual audit system.

(This column outlines my plans as a guest on Lente’s show, #SATINangEleksyon, on the evening of 3/18/2022.)