An insult to the poor | Inquirer Opinion
Close
menu
search

An insult to the poor 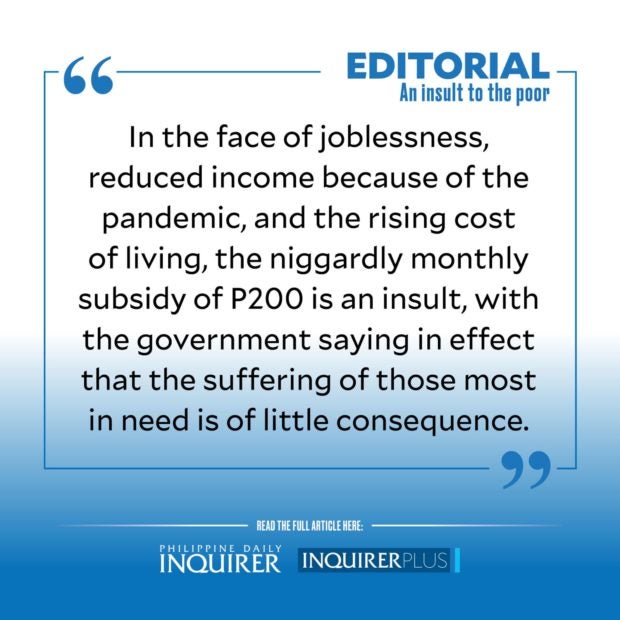 Amid the recent stratospheric rise in fuel prices, the government has approved a grant of a P200 monthly subsidy to the poorest Filipino families, instead of suspending the collection of excise and value-added taxes (VATs) on oil products as proposed by several lawmakers and consumer groups.

In the face of joblessness, reduced income because of the pandemic, and the rising cost of living, the niggardly subsidy is an insult, with the government saying in effect that the suffering of those most in need is of little consequence.

True, beggars can’t be choosers, but why throw them a morsel that tramples their dignity as well? Why reduce them to begging in the first place? Would it not be better to improve their situation before they reach such dire straits?

“How do you budget P200 (about $3) a month?” asked transport group Piston. The sector representing jeepney drivers and other transport personnel is one of the hardest hit by the fuel price hikes. Piston has asked Finance Secretary Carlos Dominguez III, whose idea this was (subsequently approved by President Duterte), to “reconsider” his recommendation. Piston president Modesto Floranda, said a report, is now challenging Dominguez to live within the minimum wage rate and the P200 subsidy “and let’s see how he can budget that.” For its part, urban poor group Anakpawis likened the P200 cash assistance to mere “spit,” perhaps because it is nothing more than verbal noise, and because it speaks of the contempt with which policymakers hold the poorest Filipinos.

The sentiment was shared even by other officials. Sen. Grace Poe described the cash aid as a “pittance,” adding that “P6.66 per day can’t even get one a jeepney ride to the minimum distance.”

But why give this “loose change” as cash aid—whose distribution is prone to delays and corruption—instead of suspending the collection of excise taxes and VAT on fuel products? Dominguez explained that doing that would cost the government a lot, reducing total revenue this year by P105.9 billion, equivalent to 0.5 percent of GDP or gross domestic product. The cash aid benefiting around 12 million households, on the other hand, Dominguez said, will cost the government only P33.1 billion.

In addition, the money to be collected from the excise taxes and VAT has already been allocated for expenditures such as the “Build, Build, Build” infrastructure program and the salaries of government employees including soldiers, police, and teachers. This also means, said the finance chief, that if the taxes are not collected and programmed expenses are still spent, “we will have to borrow more money.”

Senate Minority Leader Franklin Drilon, however, told finance officials last week to interpret “liberally” the provision of the Tax Reform for Acceleration and Inclusion (TRAIN) Law, which provides that the agency has the “power to arrest” possible inflation by suspending increases in excise taxes should the price of oil exceed $80 per barrel. The provision expired in 2020.

“Filipinos are suffering. The burden should be borne by the government … We cannot wait for the law to be amended before we act. The situation is changing rapidly by the day and we need to act fast,” Drilon said.

The Commission on Audit (COA) also pointed out that, contrary to Dominguez’s contention, the government need not go into debt as it has enough unspent money. A total of P4.99 billion, more than half of the funds meant for distribution to small businesses to help them weather the COVID-19 lockdowns, remains unused, COA revealed. The Small Business Corp., a state-run company tasked to implement the assistance to small businesses, has so far released only P4.09 billion or 45.04 percent of the P9.08 billion funds allocated to it. The Department of Budget, on the other hand, has said that more than P100 billion in funds meant to fight COVID-19 remain unspent. Surely, the unused money can be put to where it is needed most?

For starters, the Department of Labor and Employment has proposed the allocation of P24 billion to increase the monthly subsidy to minimum wage earners to P5,000 for a period of three months.

On a different front, there’s the extremely profitable “e-sabong” (digital cockfighting) that President Duterte has refused to suspend despite the mysterious disappearance of more than 30 persons involved in it. There are reports that private e-sabong operators earn as much as P3 billion in gross monthly income (daily bets reach an average of between P1 billion and P2 billion), from which government earns P640 million. Imagine what even a paltry portion of such profit could be used for!

Even better, imagine how genuine government concern for the poorest of the poor would be like if translated into real money!