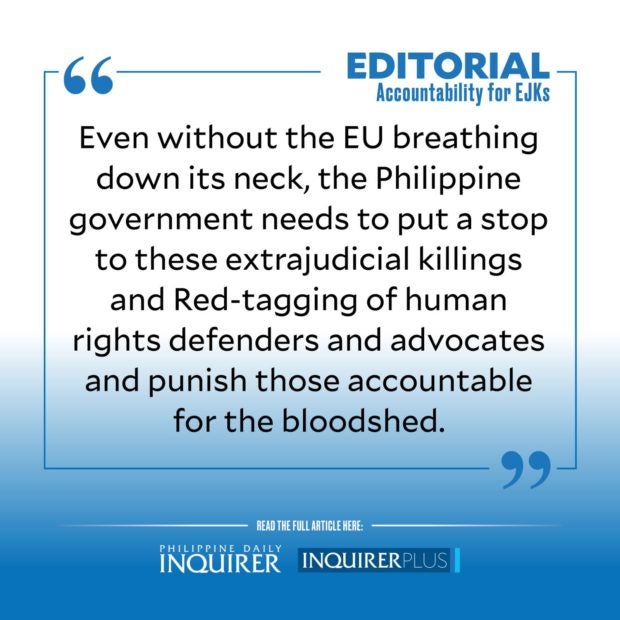 The brutal killing last month of 26-year-old volunteer “lumad” teacher Chad Booc by still unidentified perpetrators was a stark reminder that despite the Duterte administration’s loud protestations to the contrary, the bloody tally of human rights violations continues to climb.

And this has raised the serious concerns of the European Union (EU), which earlier this month reminded the Duterte administration in no uncertain terms that it was closely watching the country’s adherence to 27 United Nations and International Labor Organizations conventions, including one on human rights, on which its ability to export goods to the lucrative market granted under the Generalized Scheme of Preferences Plus program (GSP+) depends.

From Feb. 28 to March 4, a team of EU officials from Brussels went to the Philippines to carry out an official monitoring mission and reviewed the country’s progress in implementing these key conventions covering human rights, labor rights, environment, and climate, as well as good governance.

In the process, the EU said that the official monitoring mission held wide-ranging meetings with the Departments of Trade and Industry, Justice, Labor and Employment, and Environment and Natural Resources, as well as the Commission on Human Rights and the Philippine National Police, nongovernment organizations, trade unions, and human rights defenders.

Specifically, the mission “focused on the government’s actions regarding the war on drugs, accountability for extrajudicial killings, restrictions of civil society space (including Red-tagging of human rights defenders), freedom of expression, opinion and media, anti-torture legislation, anti-terrorism laws, freedom of association, child labor, drugs policy, environment and climate change as well as corruption.”

The EU said it had “conveyed a message of urgency” for the Duterte administration, which had been consistently criticized since 2016 for rampant human rights violations, to “address all these issues of concerns.”

EU ambassador Luc Véron stressed: “The effective implementation of international commitments on trade and sustainable development forms the basis of the Philippines’ privileged access to the EU market” that was granted in 2014.

The Philippines benefits significantly from this privilege of exporting close to 6,300 products including agriculture goods, processed foods, manufactured items, and fishery products, to the 27-member trading bloc sans taxes.

This privilege makes Filipino products, most of them produced by micro, small, and medium enterprises, more affordable than similar products from other nations levied taxes. Consequently, products exported through the GSP+ worth 2 billion euros accounted for around 25 percent or total exports to the EU in 2021.

The EU as a whole is also the single largest source of foreign investments and its fourth largest trading partner with two-way trade estimated at over 12 billion euros every year.

Clearly, there is a lot riding on the Philippines’ adherence to the conventions, which had not been the subject of such vociferous arguments until the launch of Mr. Duterte’s centerpiece bloody war on drugs that had left thousands dead by the government’s own count.

“While my colleagues from Brussels recognize the level of engagement and the climate of frank discussions with the Filipino government, they also reiterated the need for tangible and measurable progress over time on issues of concern,” Véron stressed.

There is indeed a very real possibility that this hard-won privilege will be revoked due mainly to grave concerns over the Duterte administration’s human rights record.

The European Parliament demanded as much in its Feb. 17 resolution, which called for the withdrawal of the GSP+ until the Philippines showed substantial compliance with the conditions.

The earlier controversial arrest of Dr. Ma. Natividad Castro, a product of the UP College of Medicine providing health services in rural areas in Mindanao, who was Red-tagged just like Booc, further reinforces the dismal human rights situation in the country which has put the Philippines under the radar of the international community.

It will take more than just rhetoric for the Philippines to avoid facing painful trade sanctions such as the revocation of the GSP+ trade perks just as the country is still fighting its way back from the devastation caused by the COVID-19 pandemic. But even without the EU breathing down its neck, the Philippine government needs to put a stop to these extrajudicial killings and Red-tagging of human rights defenders and advocates and punish those accountable for the bloodshed.