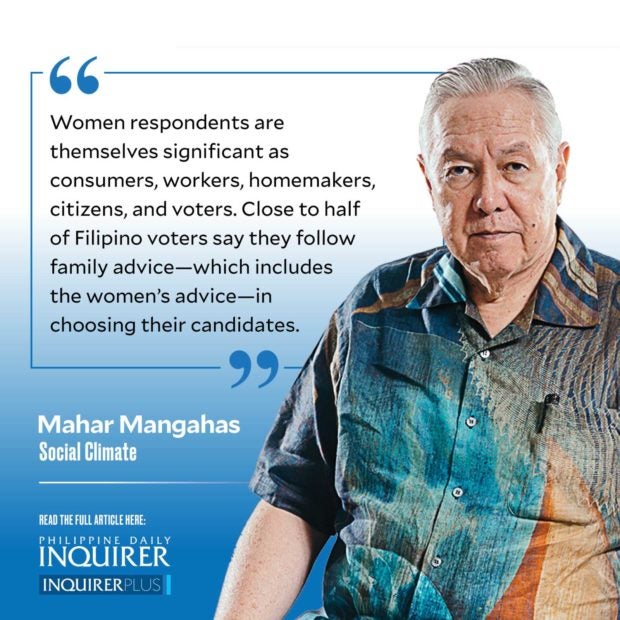 This entire month being National Women’s Month, it is proper for survey researchers to recognize the importance of women to their work.

Survey research is the science and art of listening to what people say, not of telling people what to think, much less what to do. Survey quality depends most of all on the successful engagements of interviewers with respondents.

Field staff know that a proportion—usually 20 percent—of their work is back-checked, without warning. Mistakes can be corrected, but dishonesty cannot be tolerated even once; dishonest work is trashed and must be repeated. Fieldworkers know their worth and have high esprit de corps.

It’s but natural that the pioneers in Philippine market research have all been women: Rosie Chew (+) of Consumer Pulse, Rosario Henares (+) of Asia Research Organization, Carmencita Esteban of Philippine Survey and Research Center, and Mercedes Abad of Total Research Needs; apologies to those I missed due to lack of personal contact. These companies prospered by furnishing their clients with dependable scientific statistics from their surveys.

Survey respondents are both men and women, of course. Women respondents are themselves significant as consumers, workers, homemakers, citizens, and voters. Close to half of Filipino voters say they follow family advice—which includes the women’s advice—in choosing their candidates.

I remember a story (that gives away my age)—of a man telling friends how he and his wife agreed between themselves on a fair division of the decision-making of the family. “She decides things like where we should live, where the children should go to school, or whether I should look for a new job.”

Then they asked him, and what do you decide? To which he said, “Well, I decide the bigger things, like whether or not mainland China should be admitted to the United Nations.”

Latest Russian poll on the Ukraine crisis. The World Association for Public Opinion Research has this in its Ukraine-watch page: “58 percent of Russians support the invasion of Ukraine, and 23 percent oppose it, new poll shows,” by Claire Parker, Washington Post, 3/9/2022.

Citing American pollster Gary Langer as source, the Post report says a group of survey organizations did the poll, using a Russian national sample of 1,640 adults, on Feb. 28 to March 1. “He [Gary Langer] declined to name the Russian firms involved because of the risks they face as Moscow tightens censorship,” but described them as “strong, independent survey research firms.”

To the question as to whether they support the Russian “military operation on Ukrainian territory,” the survey found that: 46 percent firmly support it, 13 percent somewhat support it, 23 percent oppose it, 13 percent have no opinion/no answer, and 6 percent are on the fence. The 46 + 13 is (approximately) the 58-point national support in the title of the Post report.

Langer informed the Post that the support for the “military operation” is lower among the youth aged 18-24: 29 percent supportive versus 39 percent opposed. It is also lower—48 percent versus the national 58 percent—in cities of over 1 million people. On the other hand, the support is higher among those whose finances were steady or improving in the past year.

The Post notes that the poll followed the Kremlin and Russian state media’s euphemism of calling the attack “a special military action,” since “merely describing the war as such could lead to a 15-year jail sentence.”

“Considering the government control of media and information in Russia, and the natural tendency of populations around the world to rally around their leadership in times of crisis, it is surprising to see this comparatively limited support for Putin and his government’s actions,” Langer told the Post. (Gary Langer has been a friend since the 1990s, when he was in-house pollster for ABC News. He later founded Langer Research Associates [langerresearch.com]. His many awards include two Emmys.)

There is still no new polling report from the Levada Analytical Center, the Russian member, and SWS’ long-time counterpart, in the International Social Survey Program (issp.org).