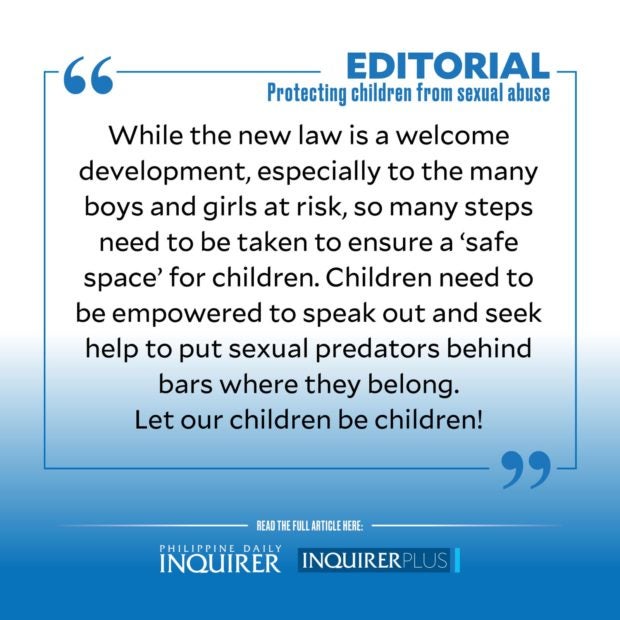 At the height of the scandal following the arrest of a congressman for the rape of an 11-year-old girl, one shocking detail stood out. In a lengthy interview published in this paper, the girl recounted how, when she was first brought by a pimp before the congressman, the legislator ordered her to remove her underpants, later explaining that he wanted to check if she was not already menstruating.

Apparently, he wanted to be sure that she was as young and inexperienced as he was told.

Mental health experts have many theories about why some adults prefer underage girls or boys as sexual partners. But, however the justification or explanation, the sexual exploitation of a child, with or without the child’s consent, is still considered by civilized society as a crime, a sin, or at the very least, a violation of the child’s human right to safety and the security of his or her person.

Notes Oyunsaikhan Dendevnorov, representative of the Unicef office in the country, sexual violence “results in severe physical, psychological and social harm to children,” with victims experiencing “an increased risk of human immunodeficiency virus and other sexually transmitted infections.” In addition, said Dendevnorov, victims also suffer from “pain, illness, unwanted pregnancy, social isolation, and psychological trauma” with many of them resorting to risky behaviors like substance abuse and exploitation.

Indeed, the lingering effects of childhood sexual trauma last well beyond a victim’s childhood, haunting their memories, and being expressed in various ways from addiction to sexual obsession, self-harm to an inability to trust others.

This is why the signing into law of Republic Act No. 11648 last week, raising the age of sexual consent from 12 years to 16 years, is a welcome development. The new law, said principal author Sen. Risa Hontiveros, is “a way of asking forgiveness from (the victims), from all children then, who were not protected by our institutions.” Agusan del Norte Rep. Lawrence Fortun, one of the bill’s main sponsors in the House of Representatives, described the measure as “a major step forward” in the fight to provide “stronger protection against rape and other forms of sexual abuse.”

Hontiveros said she had been “disheartened” by stories of teenagers as young as 13 or 14 years old who were victimized by predators, but still had to prove that they did not consent to their abuse. “In other cases,” said the senator, “they were even asked if they enjoyed it. This is a form of cruelty that has no place in our society.”

Despite the sensational nature of cases like that of the rapist-congressman, it still took decades for Congress to act on the problem of widespread sexual exploitation of Filipino children. How many women and men, one wonders, could have been saved from exploitation if the age of sexual consent had been raised early enough, and had been stringently enforced by the responsible agencies? It is hoped that the new law will be used to protect more children from abuse.

According to Unicef, the continued exploitation of Filipino children has long been a cause for alarm. Before the new law, the age of consent was the lowest in Asia and one of the lowest in the world, leaving children in the Philippines vulnerable to abuse and exploitation.

A national baseline study on violence against children conducted in 2015 found that one in every five children in the Philippines between the ages of 13 and 17 reported experiencing sexual violence, while one in 25 of all respondents experienced forced consummated sex during childhood. The study also revealed that the perpetrators are often family members, and that more boys than girls reported experiencing sexual violence.

While the new law is a welcome development, especially to the many boys and girls at risk, so many steps need to be taken to ensure a “safe space” for children. Law enforcement agencies should take reports of childhood sexual exploitation seriously and act swiftly. Children as well as the adults around them—parents, relatives, teachers, doctors, pastors—need to be educated on the issue, especially on how to spot signs of sexual abuse. More importantly, children need to be empowered to speak out and seek help to put sexual predators behind bars where they belong. Let our children be children!