Online payment platforms have come under scrutiny by legislators and regulators amid concerns these can be used for vote-buying, online sabong and other gambling activities, money laundering, and even terrorism.

Sen. Francis Tolentino sounded the alarm bells during a hearing of the Senate committee on public order and dangerous drugs on the disappearance of some 31 men involved in online or “e-sabong,” which use these digital wallets to execute bets.

In that hearing, officials of PayMaya, the country’s second-largest digital wallet provider, sought to assure the public that it followed a strict “know your customer” procedure and relied on the government IDs submitted by its subscribers as proof of legal age, following reports that even minors had become addicted to e-sabong using these payment platforms.

Globe Telecoms, which operates the largest digital financial solutions provider GCash, also emphasized during the hearing that the Ayala Group unit had installed adequate security features in the platform that prevent minors from subscribing to the service and accessing the system to make online bets. 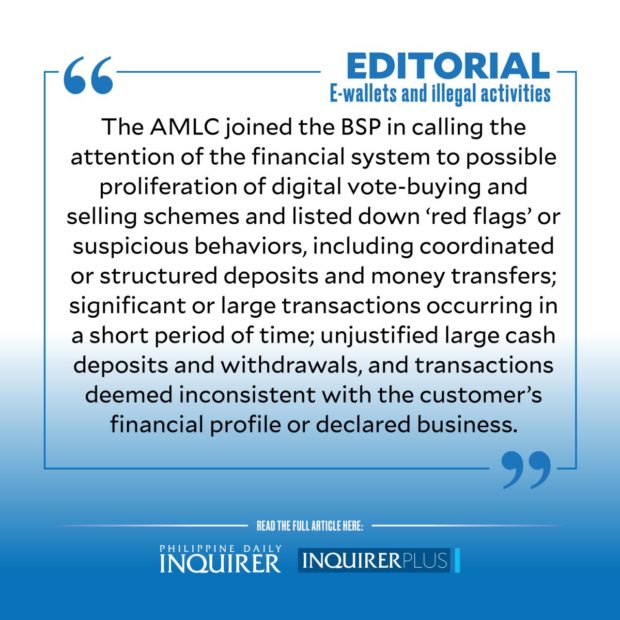 Tolentino was not satisfied by their explanations, however, and claimed that current procedures were not enough to properly determine if subscribers were really of legal age, thus making their platforms prone to other serious crimes.

With prolonged mobility restrictions imposed during the height of the COVID-19 pandemic, more Filipinos shifted to online transactions and digital payments as safety and other concerns kept them away from usual bank branches and over-the-counter payment centers.

The Bangko Sentral ng Pilipinas (BSP) estimates that as of the end of 2020, one in five financial transactions including bills payments and money transfers had been made through these increasingly indispensable digital payment systems, including e-wallets.

Indeed, estimated GCash transactions last year exceeded P3.5 trillion, with its subscriber base surging to 51 million Filipinos, equivalent to about half of the population. PayMaya, on the other hand, had 44 million registered customers with its transaction value breaching the P1-trillion mark.

Total transactions coursed through digital financial systems are poised to grow even more as the BSP drives the Philippines into becoming a “cash-lite society” where at least half of the country’s total payments will be made through digital means by 2023.

Already, great strides have been made toward fulfilling this vision as the volume of digital payments had grown to 20.1 percent of monthly payments in 2020, surging from 14 percent in 2019 before the pandemic hit, according to BSP Governor Benjamin E. Diokno.

But with such exponential growth comes significant risks, such as fraud and the possible use of these channels to facilitate crime, as feared by Tolentino.

Fortunately, the BSP and the Anti-Money Laundering Council (AMLC) are very much aware of these dangers and have, for example, directed banks and other financial services providers to shore up their cybersecurity systems to prevent accounts from being unlawfully accessed and compromised.

Last month, the AMLC directed banks and other financial institutions to be on the lookout for dirty cash that might be spent on digital vote-buying and selling in the run-up to the May 9 national elections.

The AMLC joined the BSP in calling the attention of the financial system to possible proliferation of digital vote-buying and selling schemes and listed down “red flags” or suspicious behaviors, including coordinated or structured deposits and money transfers; significant or large transactions occurring in a short period of time; unjustified large cash deposits and withdrawals, and transactions deemed inconsistent with the customer’s financial profile or declared business.

The private sector has responded to the challenge to help stamp out these illegal activities with the launch by the FinTech Alliance.PH and eMoney Association of the Philippines of an advocacy campaign preaching the responsible use of digital payment platforms.

Their member-organizations have likewise assured the BSP and AMLC that robust security systems are in place to help prevent crime perpetrated online.

Such partnership is reassuring to customers who are indeed wary of the risks but have at the same time realized the benefits of using financial technology such as mobile wallets that have allowed more Filipinos, particularly those who have been unable to open accounts because of stringent requirements of traditional banking channels, to access vital financial services.

That fragile trust can be strengthened by constant vigilance, investments in safety and procedures, and a grim determination to ensure that criminal activities such as money laundering will have no place in these now-indispensable online financial systems.