A woman’s place is out there

A timely tribute to International Women’s Day today is the Women in Business research showing that the Philippines remains third in the list of countries with the highest number of women executives in mid-size companies. The report, released last week, is the result of Grant Thornton International Ltd.’s latest survey among senior leaders from 5,000 businesses across 29 economies.

But the research by the global consultancy firm also indicated that the number of women in senior management positions in the country has dipped from 48 percent in 2021 to 39 percent in 2022. And there’s the rub. While the Philippines has made tremendous progress when it comes to the role and status of women, global studies have painted an ambivalent picture of contradictions breaking the momentum that would have propelled Filipino women further.

Take the 2021 Global Gender Gap Report of the World Economic Forum where the Philippines ranks second in the Asia-Pacific, next only to New Zealand, and 17th overall among 156 countries, when it comes to four indicators: economic participation, political empowerment, health and survival, and educational attainment.

At the same time, the report noted that less than half of women in the country are in the job market, and are paid 22 percent less than men in performing the same job, leading to a significant 31 percent income gap between them. 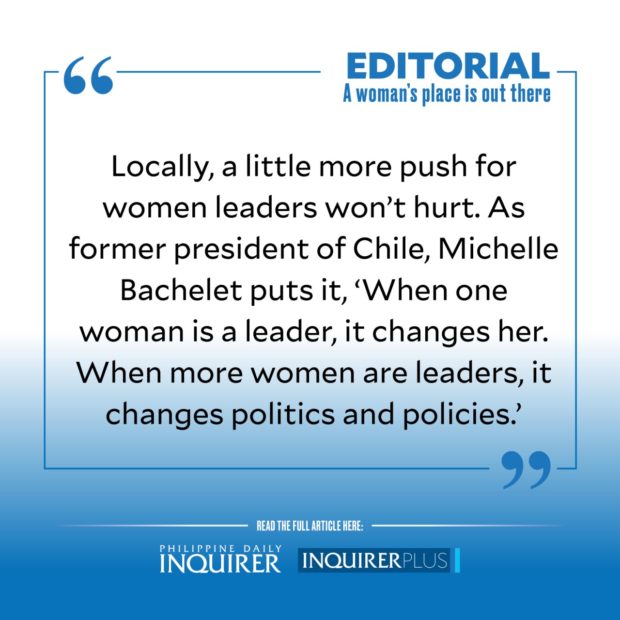 The gender gap in politics remains as well, despite the country having had two female heads of state in the past 35 years. According to the Philippine Commission on Women (PCW), from 1998 to 2016, the percentage of women elected into public office ranged from 16.1 percent to 21.44 percent, reaching its peak in the 2016 elections. In the 2019 national and local elections, only 20.16 percent (8,782) of the candidates were female.

The existing gender biases that see women as less qualified for politics can explain this, the PCW cited. Gender stereotypes bolstered by popular media’s image of women as stay-at-home housewives have contributed to women being regarded as weak, emotional, and indecisive—qualities that are undesirable in negotiation and decision-making. Such perception—publicly articulated by authoritarian President Marcos in 1985 when opposition figure Cory Aquino dared run against him in the snap elections—has discouraged voters from choosing women at the polls. Admittedly, most women are themselves hesitant to run at the thought of shouldering a “multiple burden,” that is, bearing most of the domestic responsibility at home while engaging in political, economic, and social activities.

Then there’s the huge election expense involved, with campaign donors and political parties expressing a preference for male candidates perceived to have higher probabilities of winning. The difficulty of raising sufficient resources for costly electoral campaigns has hindered women from running, the PCW noted.

But why elect more of them when some women officials have not proven different from their male colleagues? That may be true, but so is the opposite: women have shown themselves as capable in leadership roles, as in the cases of the former female chiefs of the Commission on Audit, the Ombudsman, and the Bureau of Internal Revenue. Women, who are less inclined to vices, have often shown themselves to be less prone to corruption and temptation. Among civil society groups, channeling assistance to poor families through women has proven to be more effective in ensuring that the money goes directly to the children’s schooling, medication, and household needs instead of being diverted to unsavory expenses.

According to UN Women, there is also strong evidence that as more women are elected to office, there is a corollary increase in policymaking that emphasizes quality of life and reflects the priorities of families, women, and ethnic and racial minorities. Because while male officials are adept at crafting laws, they cannot always represent the interests of women considering their differentiated needs, issues, socialization, and experiences. The level of literacy among Filipino women which is higher than men’s—98.24 percent versus 98.12 percent—also begs the question: why ignore and waste the potential contribution of half the country’s population to favor outdated beliefs that stop us from moving forward?

All over the world, there is growing recognition of the untapped capacity and talents of women and women’s leadership, according to the global advocacy group Women Deliver. Over the last two decades, women’s representation in national parliaments globally has increased from 11.8 percent in 1998 to 17.8 percent in 2008, and 23.5 percent in 2018, with dramatic increases in Sub-Saharan Africa and the Arab States region.

Locally, a little more push for women leaders won’t hurt. As former president of Chile, Michelle Bachelet puts it, “When one woman is a leader, it changes her. When more women are leaders, it changes politics and policies.”