Leni, Zelenskiy, and the meaning of showing up | Inquirer Opinion
Close
menu
search

Leni, Zelenskiy, and the meaning of showing up 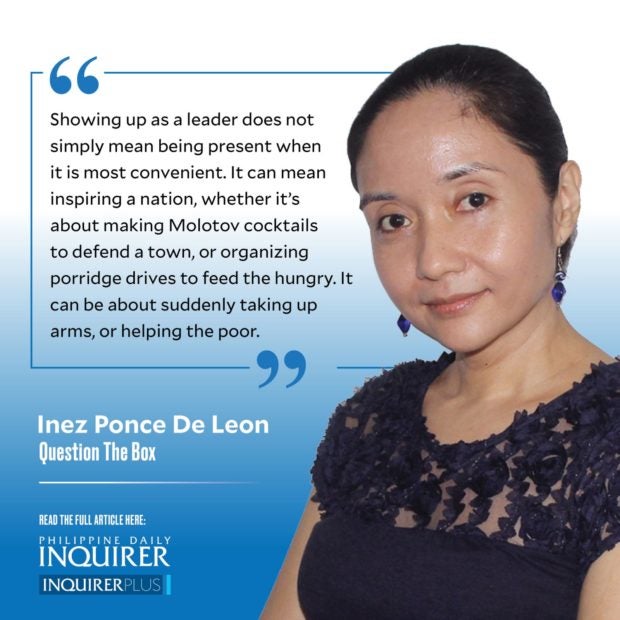 “If you don’t show up in the most difficult times,” Vice President Leni Robredo said in last week’s debate, “Then you are not a leader.” The rest of the presidential candidates agreed.

Our definition of “showing up,” however, seems to encompass so many situations, that we are always in danger of warping our standards to levels that would make amoeba qualified for leadership.

Look at the disasters of these last few years. Sitting in the comfort of a helicopter to survey the damage of a typhoon is interpreted as showing up, even lauded on social media; and yet another leader plodding through the mud to bring aid to isolated communities is mocked as “fake.”

Look at the COVID-19 response. Suddenly handing out donations is defined as showing up, to the tune of cheers on Facebook; and yet another leader who has organized aid distribution, helped assemble care boxes for COVID-positive individuals, and sent out mobile testing units since the beginning of the pandemic is labeled “ineffective.”

Look at the campaigns. A candidate with no platform refuses to attend debates, and yet is praised online. In the meantime, another candidate has been delivering aid while going to campaign rallies while still fulfilling her duties as vice president and still finding time to participate in the debates—yet she is derided for being “just a woman.”

How conveniently contradictory, these definitions of showing up.

Perhaps the most poignant example of showing up is Volodymyr Zelenskiy, the president of Ukraine. He was at the Munich Security Conference days before the Russian invasion, but he chose to go home to Kyiv to be with his family and work as head of state. He was offered a chance to escape, to create a government in exile, but he refused, saying that he needed ammunition, not a ride.

And every night since the invasion began, Zelenskiy releases videos on Instagram showing him and his Cabinet dressed in fatigues, asking for help to defend Ukraine, speaking defiantly against the Russian invaders. He says that he is the enemy’s “No. 1 target”; but there he is, in the capital, standing firm as a convoy of Russian military vehicles miles and miles long threatens to surround the city and lay siege to it.

Much has been said about Zelenskiy the comedian who once played the hesitant president of Ukraine on television. What most people forget is that Zelenskiy actually graduated with a law degree, before pursuing a career in comedy. He ran as a political outsider in 2019 on an anti-corruption platform, then endured years of social media mockery that called him the clown elected to the presidency.

Today, Zelenskiy chooses to stay with his countrymen, and is lauded across the world for his bravery in the face of the Russian tide. Columnists from The Atlantic call his nightly appearances “defiant selfies”: they show Zelenskiy gazing straight at the camera, engaging viewers in a virtual conversation, even as his anger simmers, even as his speech drips with fire. The columnists draw stark contrasts between him and Vladimir Putin, the frighteningly stoic Russian president forever clothed in coat and tie, seemingly orchestrating his military machinery from a bunker illuminated by floodlights.

Putin, indeed, is probably sitting comfortably in a government office, fingers trembling over the button that can set off a nuclear attack. His brand of showing up is different: He is hiding from the world and sending out troops to do his bidding. He is forcing soldiers onto the frontlines to sustain damage and pain on his behalf. Putin himself is untouchable: His stare is blank and cold; he is unblinking in his twisting of history.

In response, his countrymen risk their lives to speak up against his insanity.

Across the border, a leader, too, is in the trenches. Behind him is a country strengthened and inspired.

Showing up as a leader does not simply mean being present when it is most convenient. It can mean inspiring a nation, whether it’s about making Molotov cocktails to defend a town, or organizing porridge drives to feed the hungry. It can be about suddenly taking up arms, or helping the poor.

Showing up is not about the candidate alone, but about the goodness they inspire.

May we all have a nuanced definition of what being present means when we show up to vote on May 9.