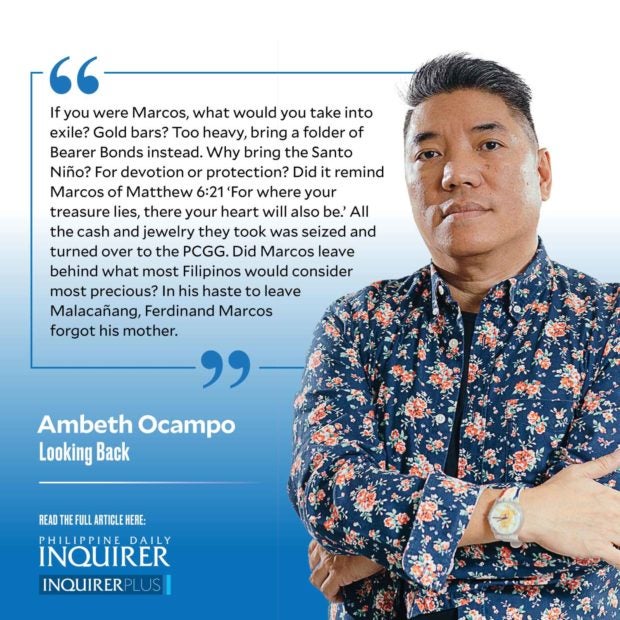 Ferdinand Marcos was visibly weary when he stepped off the US C-141 that transported him from Guam to Honolulu in February 1986. He wore a jacket and soft hat better suited for a golf game than the beginning of life in exile. While he was a guest of the US, there was no brass band, no military honors, no flag-waving cheering crowd, no red carpet as he had in 1966 under Lyndon B. Johnson and again in 1982 under Ronald Reagan. Only the Hawaii governor and his wife were on the tarmac to meet Marcos with a handshake and a lei. They were not accorded port courtesies, and their baggage was held and inspected by the US Customs.

The US Customs Service inventory of “Articles Accompanying Marcos Party Upon Arrival [in] Honolulu, Hawaii on 26 February 1986” is very disappointing because their seized luggage did not even amount to a billion pesos. Where was the unexplained wealth?

One large wooden crate contained an Infant Jesus of Prague statue wrongly described by US Customs as “El Niño.” This must have been the famous ivory image venerated in Malacañang that wore a hammered silver mantle. It came adorned with gold necklaces: one with a diamond, one with a gold cross, and another with a gold medallion. A ceramic seated Jesus was in a different box. A brown Louis Vuitton Foot Locker bag that had 154 videotapes, 17 cassette tapes, and assorted documents. What and where are these today? One aluminum suitcase held an assortment of jewels, mostly cuff links; and watches (from Rolex, Piaget, and Chopard to cheap Seiko and Casio) and a Cartier table clock. Aluminum would hide five handguns: three Berettas, one Magnum .357, and a Walther handgun from X-ray inspection.

If US Customs released these “personal effects” to the Marcoses, they could have opened a jewelry shop in the garage of their Makiki Heights mansion. One brown suitcase had 82 items including: seven ladies Cartier quartz watches, two Seiko, one Patek Philippe with gold bracelet (valued at $4,475), one ladies Patek with diamonds, three Rolex yellow gold Oyster Perpetual, seven Chopard watches with diamonds, six Girard-Perregaux ladies watches (five in gold, one silver), five Perret watches, and nine Van Cleef & Arpels watches (two in poor/old condition). The same suitcase yielded a handful of items valued individually at over $10,000: set of teardrop green emerald and diamond pendant $74,825, a necklace valued at $32,540, a heart-shaped brooch $18,165, and a necklace with eight pearls $16,345.

If you were Marcos, what would you take into exile? Gold bars? Too heavy, bring a folder of bearer bonds instead. Why bring the Santo Niño? For devotion or protection? Did it remind Marcos of Matthew 6:21 “For where your treasure lies, there your heart will also be”? All the cash and jewelry they took was seized and turned over to the Presidential Commission on Good Government. Did Marcos leave behind what most Filipinos would consider most precious? In his haste to leave Malacañang, Ferdinand Marcos forgot his mother.