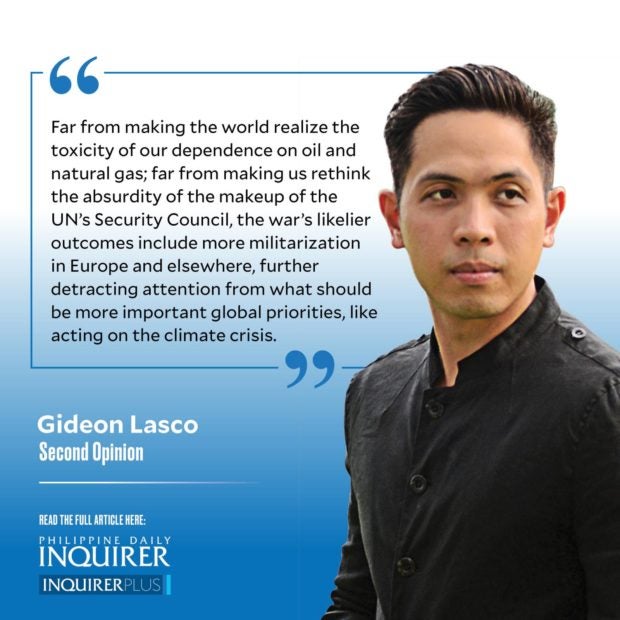 Bogotá, Colombia — Like many people around the world, I watched in outrage and horror as Russian President Vladimir Putin unleashed a war on Ukraine; wreaking havoc on an entire nation and millions of innocent civilians in a brazen attack that bore echoes not just of Ivan the Terrible, but of Adolf Hitler. The idea that a powerful nation can just subjugate a neighbor, and terrorize whole cities in the process, is unnerving, and so is the seeming powerlessness (or unwillingness) of the rest of the world to stop it.

Of course, other nations and heads of state have inflicted such arbitrary violence in the past, and I have no illusions about NATO, the European Union, the United States, or Ukraine. But neither such history nor the double standards we see today between the Ukrainians and other “non-European” victims of conflict should detract attention from the sheer barbarity being committed today that is causing suffering not just to the Ukrainians but to the Russians who now have to suffer the consequences of Putin’s war, from the poor soldiers sent to pointless war to the citizens who find themselves poorer and more isolated.

Thankfully, despite President Duterte’s fanboying over Putin in the past, the Philippines voted with the overwhelming majority in the United Nations to “deplore” the Russian invasion of Ukraine “in the strongest possible terms.” Facing threats to our own territorial integrity—particularly in the West Philippine Sea—it is just rightful for the Philippines to rally against such a brazen offensive, and to recognize that an attack on one nation’s sovereignty is an attack on the very idea of sovereignty.

The fact that there are Filipinos in every corner of the world—including in Moscow and in Kyiv—also means that no country should be too far from our own concerns. And of course, we are invested in the global economy: Already, oil prices are spiraling in the Philippines and can exacerbate our people’s economic struggles.

What will happen next in Ukraine, and what will this spell for the future of the world at large?

The spirited resistance of the Ukrainian government and the resolute leadership of their president Volodymyr Zelenskiy, have doubtless helped galvanize Ukrainian resolve, Russian dissent, European action, and global attention—leading many commentators to argue that Putin has badly miscalculated the cost of his war, with some even suggesting that this might be beginning of the end for him. Indeed, for people around the world—especially those who are living under corrupt, repressive regimes— the fact that people are standing up to a nuclear-armed autocrat against all odds is nothing short of inspiring.

More sober voices have cautioned, however, that the Russian dictator has more weapons in his arsenal, and could be even more ruthless in the coming days and weeks. No matter how futile his war will turn out to be; no matter how ultimately unwinnable it is, it is the millions of ordinary citizens who will suffer the most from his obstinacy and cruelty.

Unfortunately, far from making the world realize the toxicity of our dependence on oil and natural gas; far from making us rethink the absurdity of the makeup of the UN Security Council, the war’s likelier outcomes include more militarization in Europe and elsewhere, further detracting attention from what should be more important global priorities, like acting on the climate crisis. Already, Germany has pledged to increase its defense spending, in a historic turnaround from its long-standing anti-militarization stance. Understandably, Taiwan is especially unnerved by this development as it bodes ill for the so-called “rules-based international order,” and can thus also lead to more militarization closer to home.

Meanwhile, in the Philippines, it is understandable that our attention remains foremost on local issues—including the ongoing violence being perpetuated against our own people, like the killing of volunteer teacher Chad Booc and colleagues in New Bataan, Davao de Oro on the same day as Putin authorized his “special military operation.”

And of course, the frenzied campaign for the presidential elections that will determine whether we will have more of the same militarization, Red-tagging, corruption, and tyranny in the coming years.

Amid our own Orwellian specters, we will do well to elect leaders who know how to stand up for what is right, and to reject state violence as an instrument of policy: whether in foreign lands or within our shores.