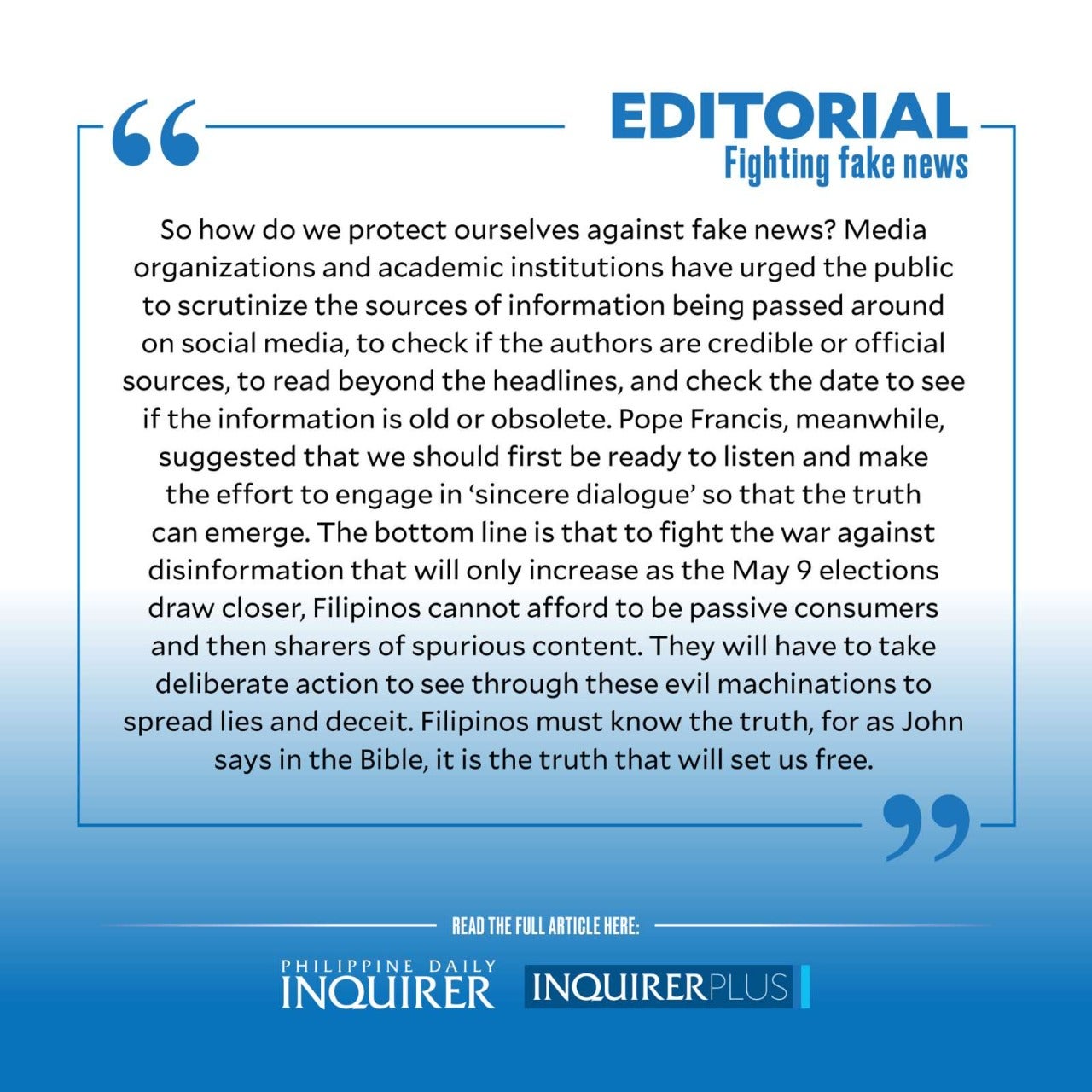 The Catholic Bishops’ Conference of the Philippines (CBCP) marked the 36th anniversary of the Edsa People Power Revolution last week with an urgent appeal to Filipinos to “stand up for truth” amid the “distortion” of history and the alarming spread of damaging fake news, false stories, and disinformation that may affect the outcome of the crucial May 9 elections.

“We are appalled by the blatant and subtle distortion, manipulation, coverup, repression and abuse of the truth,” said the Feb. 25 pastoral letter signed by CBCP president and Caloocan Bishop Pablo Virgilio S. David that also condemned “the seeding of false information and narratives in order to influence the opinion of the people, to hide the truth, to malign and blackmail people.”

“There are troll farms which sow the virus of lies,” said the CBCP. As a result, Filipinos are caught in the grip of a devastating “pandemic of lies” that is only getting worse.

A survey released last month by the Social Weather Stations revealed that seven out of 10 adult Filipinos believe that the problem of fake news in media was “serious.”

The same is true for popular social media platforms heavily used by Filipinos, with 67 percent of the survey respondents saying that fake news on popular sites such as Facebook, Twitter, and YouTube was a “serious” problem.

Examples of active disinformation campaigns are contained in a report by fact-checking group Tsek.ph, which said that in the 326 fact checks from Nov. 21 to mid-February 2022 alone, it encountered conspiracy theories, denial of the rampant human rights violations during the Marcos dictatorship and the casting of democracy icon Corazon Aquino as a villain.

Pope Francis already condemned in 2018 the damage caused by the deliberate spread of fake news by those who seek to weaken institutions, likening it to when the “crafty serpent” in Genesis lied to Eve, thus putting humanity on the path of sin.

With the election campaign heating up to fever pitch and the level of disinformation on media rising along with it, the CBCP exhorted Filipinos to be vigilant and make the effort to engage in dialogue and exercise discernment to separate the truth from the lies and preserve the sanctity of the electoral process.

This will be a daunting challenge, however, as there are “weaponized” influencers and “digital black operations” pumping out massive amounts of disinformation that are cleverly disguised as truth, making it difficult to spot or unmask them.

It does not help that, as Pope Francis lamented, people have largely kept themselves to “homogenous” information environments or echo chambers, shielding them from differing or even contrasting perspectives and opinions that are necessary to arrive at better informed decisions or views.

“Disinformation thus thrives on the absence of healthy confrontation with other sources of information that could effectively challenge prejudices and generate constructive dialogue; instead, it risks turning people into unwilling accomplices in spreading biased and baseless ideas,” the Pope said.

The SWS survey indeed revealed that one of two Filipinos found it difficult to spot the fake news from television, radio, or social media, thus making them especially vulnerable to misleading or outright false content on both traditional and social media that is being pushed aggressively by special interest groups.

So how do we protect ourselves against fake news? Media organizations and academic institutions have urged the public to scrutinize the sources of information being passed around on social media, to check if the authors are credible or official sources, to read beyond the headlines, and check the date to see if the information is old or obsolete. Pope Francis, meanwhile, suggested that we should first be ready to listen and make the effort to engage in “sincere dialogue” so that the truth can emerge.

The bottom line is that to fight the war against disinformation that will only increase as the May 9 elections draw closer, Filipinos cannot afford to be passive consumers and then sharers of spurious content. They will have to take deliberate action to see through these evil machinations to spread lies and deceit.

Filipinos must know the truth, for as John says in the Bible, it is the truth that will set us free.