Why India is right not to take sides on Ukraine 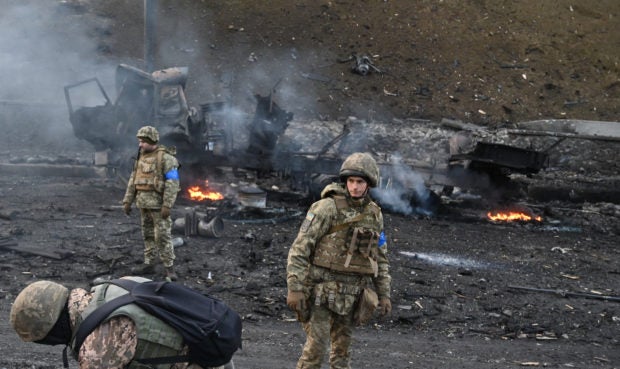 Ukrainian service members look for and collect unexploded shells after a fighting with Russian raiding group in the Ukrainian capital of Kyiv in the morning of February 26, 2022, according to Ukrainian service personnel at the scene. AFP

NEW DELHI — Critics from either side of the foreign policy matrix may have issues with India charting an independent and balanced course on Russia’s invasion of Ukraine as against Nato allies and European Union opposition to this intrusion.

Pro-Nato and European think tanks have made out that India missed the bus in playing a decisive role in world affairs yet again by staying away from the conflict. Soviet-era Russia backers have hailed India’s ‘sensible’ decision not to go whole hog with the Nato alliance given her varied offensive and defensive interests. However, the Modi government hardly had many options in changing the course of events leading to military aggression on Ukraine by Russia while both Nato and the European Union went ahead with severe sanctions against Moscow.

Prime Minister Narendra Modi’s telephonic conversation with President Vladimir Putin is a significant step to convey India’s message and concerns to the Russians. Since Indian students studying medicine in Ukraine are caught in the crossfire, the government has expressed its concerns that Indians be allowed to return home safely. India’s appeals for peace and getting back to diplomatic dialogue on outstanding issues relating to Ukraine cannot be ignored by the world community.

Russia’s ‘military operation’ in Ukraine has virtually sealed the possibility of rapprochement with Europe that continued to hang in balance during the last 30 years. India’s external affairs minister S. Jaishankar rightly assessed the genesis of the Ukrainian issue to lie in the complexities of ‘Post Soviet Politics, expansion of Nato and relationship between Russia and Europe.’

In the last three decades, Russia concluded numerous arms-reduction treaties with Western countries including the 1997 Russia-Nato Act, Budapest Memorandum, Treaty on Conventional Armed Forces in Europe (1990), Intermediate-Range Nuclear Forces Treaty (1987) and Open Skies Treaty that put an end to the cold war in Europe and opened avenues for cooperation between Russia and Europe.

Within Russian circles there is a genuine belief that they did not reap benefit of the cooperation with Europe, the point of affliction being the grant of Nato membership to Ukraine that brings Europe’s sphere of influence to Russia’s doorstep. In this context, President Putin’s statement that Russia wants demilitarization of Ukraine and it ‘does not intend to occupy’ the country implies that the conflict goes beyond bilateral relations and points to involvement of greater Western powers.

In the larger struggle for supremacy, one country which has been asked to pick sides in India. As an emerging market economy, credible and substantial international power, India has largely seen herself as a stabilizing factor that pushes seriously for peace and prosperity. Such is the case especially after India became an equivalent member of Quad after shunning ‘hesitations of history’ that defined non-alignment.

The Indian position has come into greater focus due to its close relations with Russia, the US and the European Union. Its membership and current chairmanship at UNSC have only accentuated India’s stake given that she has been a longtime votary of an independent foreign policy and plurilateral world order. Since India has had close civilizational links with both sides, it is pragmatic and logical to abstain from voting on the Ukraine issue at UNSC.

India’s representative at UN, T N Tirumurti spelt out India’s stand and asked countries to find peaceful, diplomatic solutions through the Minsk mechanism. Also, it should be kept in mind that being a member of Quad does not make it imperative for India to jump into a European crisis.

S. Jaishankar has poignantly said that during the Galwan crisis Europe did not support India right off the bat, they took their own strategic calculations into account. In return, as an independent country, India has the right to decide her course based on her strategic calculations. At the same time, it is rather impractical to expect India to sever its relations with Russia that has been her single largest defense partner with 60 per cent share in India’s defense inventory.

On the other hand, India has also nurtured progressive relations with the US as well as Europe for over 20 years, since the Vajpayee-Clinton era. India as a fast-developing country has its own pressing needs with over 1.4 billion to feed. Therefore, expectations on either side for India to align may not fit into New Delhi’s scheme of things. Her compulsions to lift a vast majority out of poverty and put herself on the growth trajectory are what drive India’s foreign policy. In fact, these imperatives pushed India’s position, striking a fine line between Russia and the West at large.

However, instability on the eastern flank of Europe brings home the acute need to develop in-house inventory of defense mechanisms and systems without depending on imports. Self-reliance is the key to great power status. ‘Make in India’ initiative in the defense sector is a significant component of the policy choice made by the Indian government. Russia’s invasion of Ukraine is bound to create ripple effects already being felt in India though New Delhi has stayed away from swinging either way.

Crude prices touching $105 per barrel in spot markets would translate to a larger fuel import bill thereby upsetting budget numbers outlined by Finance Minister Nirmala Sitharaman. As Russia, apart from OPEC, has been a large exporter of hydrocarbons in particular to Europe, the crisis will increase fuel prices and shortages in almost all of Europe.

For instance, Finland imports most of its crude while Hungary gets 83 per cent, Austria – 62 per cent and Germany imports 46 per cent of its natural gas directly from Russia. Russia’s output had kept fuel prices competitive while curbing the Gulf’s dominance; its engagement otherwise will give space for the Gulf monopoly that is bound to distort market prices, distribution as well as access. Most importantly, it will create crude-induced inflationary pressures in countries such as India where over 80 per cent fuel demand is met through imports.

The World Bank report, Global Economic Prospects, 2022 argues that the world is walking towards global slowdown as the fiscal support in the wake of the coronavirus pandemic wanes, increase in debts and inequalities would kick in across the world. It will be a blow to the precarious growth of the world economy going through post-Covid impact. There is no denying that Europe and the world at large is treading choppy waters.

Though the ongoing invasion may not go the cold war way, it will certainly wreak havoc on lives of innocent people caught in the crossfire. Human cost involved in the war should act as a deterrent and the countries involved should focus on progressive de-escalation measures. At the same time, there is a need for recognizing bullies that do not allow a sustainable global order to emerge. As Gandhi said, an eye for eye attitude will make all of humanity blind!

(The writer, Amrital Kaul,  is a doctoral scholar at Jawaharlal Nehru University and contributing fellow, Center for Integrated and Holistic Studies, New Delhi.)

Russia’s war on Ukraine: Day 6 situation on the ground