Reading the songs of Edsa 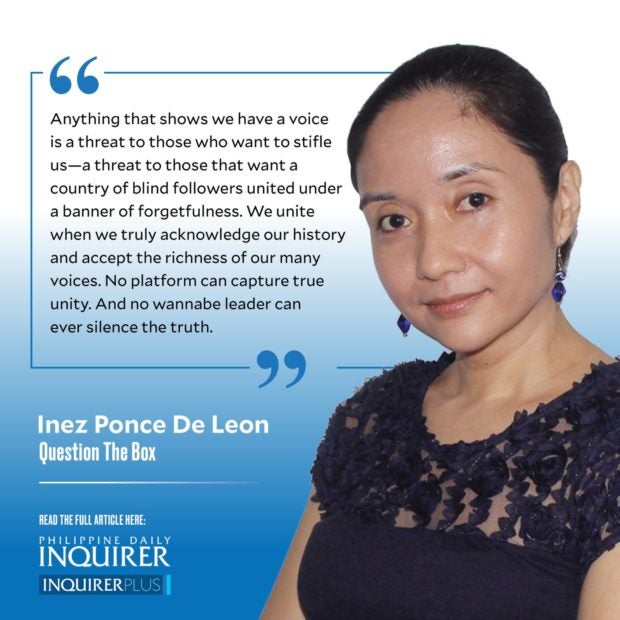 We did not receive formal school lectures about martial law after the revolution, but we students took it upon ourselves to do our own research. We picked up a variety of books: “Inside the Palace,” “Dekada ’70,” “The Conjugal Dictatorship.” We read about the Mendiola massacre, the Negros famine, the Manila Film Center. We saw how an official narrative covered everything in catchphrases to conceal the weaknesses underneath.

Today, we are told that Edsa was a mistake and that the true victim was the family in Malacañang that allowed people to die, whether they were protesting, pushed out of their lands, or buried alive beneath tons of concrete.

To understand why unity is misused, we turn to the songs that battled for people’s hearts and minds. I will now join my ideas to those written by researchers such as Raul Navarro, Joyce Arriola, and Marlon Delupio.

Music, Navarro says, is a record of our history, hopes, and identities. Like any martial law art, music was used by the regime to push “Bagong Lipunan” (New Society). The eponymous anthem promises a new and better world. A closer reading of the song, however, shows that the new society is a promise that citizens must blindly accept. They have no role in crafting or shaping it.

When viewed against the slogans of that time, “Bagong Lipunan” sounds more like an anthem for North Korea: There is no progress without discipline, unity is nationalism, accept the official narrative. Disobey and you are unpatriotic. Question and you are not Filipino.

Unity, therefore, meant shedding our history, regions of origin, and individual voices. Diversity was frowned upon. Dissent was silenced. No surprises, Arriola says, for a ruling family so afraid of contradictions.

The Edsa songs provide a stark contrast. “Bayan Ko” (My Country), originally written during the Philippine-American War, was a song of active wishing: The singer hopes for their country to be free, as any bird caged would dream to fly.

“Magkaisa” (Unite) is an order to come together, but to first understand and love one another. The song also tells us not to be swallowed by the storm; it warns us not to go with the flow (Tayong lahat ay magkakalahi/Sa unos at agos ay huwag padadala). “Magkaisa” speaks out against false unity: It enjoins us to join forces but to never forget who we are as individuals.

“Handog ng Pilipino sa Mundo” (The Gift of the Filipinos to the World) is a call for everyone to have a common goal (sama-sama iisa ang adhikain) but it also says that we must listen to each other’s unique voices unless we want to fall into darkness again (Huwag muling payagang umiral ang dilim/Tinig ng bawat tao’y bigyan ng pansin).

In these songs, unity must arise organically from people who accept their diversity and recognize their strengths. It is not foisted upon them. It is not a platform that they vote for. It is not the end in and of itself.

So why do we bristle at the idea of unity? Because the platform of unity implies that we must forget ourselves: the colonial past that is part of our identity, the recent history that reminds us of our weakness for dictatorial rulers.

The “Bagong Lipunan” version of unity echoes even today, as posters are torn down, murals are painted over, bike tires are slashed, volunteers harassed. In the years leading up to Edsa, the official narrative was used to tear down the contrary and paint over the dissent, all because they threatened unity—all because they showed that the people have a voice.

We unite when we truly acknowledge our history and accept the richness of our many voices.

No platform can capture true unity. And no wannabe leader can ever silence the truth.