William Saunders: A name that binds 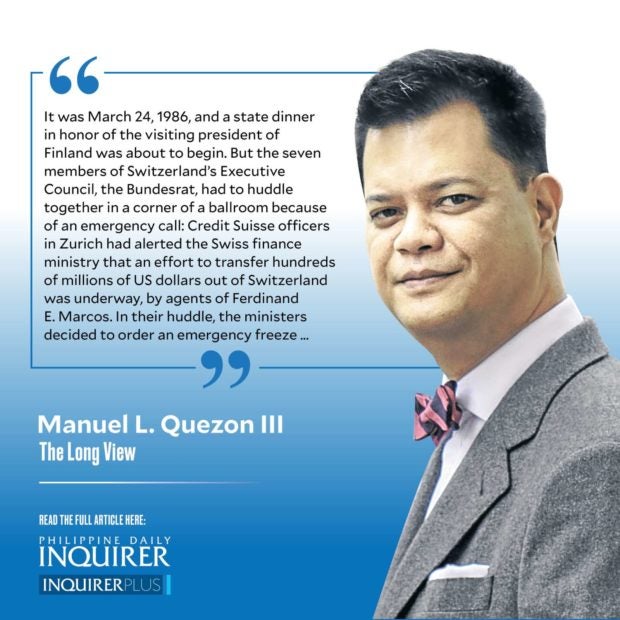 It was March 24, 1986, and a state dinner in honor of the visiting president of Finland was about to begin. But the seven members of Switzerland’s Executive Council, the Bundesrat, had to huddle together in a corner of a ballroom because of an emergency call: Credit Suisse officers in Zurich had alerted the Swiss finance ministry that an effort to transfer hundreds of millions of US dollars out of Switzerland was underway, by agents of Ferdinand E. Marcos. In their huddle, the ministers decided to order an emergency freeze (in the words of Pieter Hoets and Sara Zwart in the NYLS Journal of International and Comparative Law in 1988, “on all assets held in Switzerland by Ferdinand Edralin Marcos, his family, and by persons or organizations close to him”) which ultimately had two effects: the first was that it “stunned Swiss bankers and foreign clients around the globe,” as both Swiss domestic and foreign opinion turned against Switzerland’s secrecy rules; and it made possible the decision by the Swiss Federal Supreme Court that contested Marcos money had criminal provenance and would be forfeited to the Republic of the Philippines, against the appeals of various Marcos foundations.

I unearthed this vivid vignette because of two articles that came out on the 20th of this month as inconvenient reminders about the saga of the Marcos billions. The first appeared in The Guardian. It was about a leak involving Credit Suisse, which involved a Who’s Who of the dishonest, including alleged fronts of the Marcoses (who themselves became the Poster Children of the Swiss-centered scheme of hiding the ownership of bank accounts behind pseudonyms). As the article put it, “It has long been known that Credit Suisse was one of the first banks to help the Marcoses ravage their own country and in one infamous episode even helped them open Swiss accounts under the fake names ‘William Saunders’ and ‘Jane Ryan’. In 1995, a Zurich court ordered Credit Suisse and another bank to return $500m of stolen funds to the Philippines.”

The second appeared in an article by Peter Reilly in Forbes.com. It was about the strange story of the estate of Harry Stonehill, which is still fighting a tax evasion case with the US government decades after the man himself died in 2002 (and approaching 60 years since Stonehill, a GI turned tycoon, was deported upon the orders of President Diosdado Macapagal when an investigation into his corruption threatened to implicate a Who’s Who of political potentates, including then Sen. Ferdinand E. Marcos). This detail caught my eye: A lawyer representing the Stonehill estate, in reciting their reasons for disputing the US government’s efforts to collect back taxes and penalties, pointed out, “Stonehill’s lawyer William Saunders, who initially represented Stonehill after the raids, was an informant who cooperated with the government.”

Peter Reilly, when I mentioned this interesting tidbit, replied, “Saunders was Harry’s lawyer and tipped the IRS off that he had Swiss bank accounts. Saunders must have been quite wealthy when he died as his wife’s estate was litigated in Tax Court.” It turns out the story of William W. Saunders, deceased in 2003, is another of those endless instances of litigation between estates and the government (an interesting sidelight: Saunders was facing suits filed by the estate of Stonehill, on the basis of official documents revealing Saunders was an IRS informant).

But, again, the startling fact: Ferdinand E. Marcos, formerly entwined in a payola scandal with Harry Stonehill, who’d had, and gotten into trouble by a lawyer named William Saunders, ended up using, as his pseudonym for his first venture into the seemingly impenetrable world of Swiss secret private banking, the name of… William Saunders (then still very much alive, and practicing law).

Yet quite peculiarly, time and again the origin of this pseudonym has been explained away as an old, wartime-era code name that Marcos had used. Which only goes to show how his embroidering his wartime activities have withstood repeated scrutiny. For his part, Ambeth Ocampo, in a column on Marcos and his diaries, mentioned in passing a Marcosian “attempt at humor,” when he instructed his bankers in February 1970 that “In the event we would wish to make withdrawals, we will send you a cable with the words ‘Happy Birthday’ authenticating our message with the agreed-upon code.”

Nick Davies, in a definitive article in The Guardian on the Marcos billions in 2016, wrote that the Great Dictator-to-Be was “naïve in his crime” until “he and Imelda took their first steps to real secrecy on 20 March 1968, when they used false names to deposit $950,000 in four accounts with Credit Suisse, he as William Saunders (he practiced his new signature on the headed paper), she as Jane Ryan. By February 1970, the Swiss accounts were so loaded, the couple added an extra layer of concealment, transferring their ownership to foundations registered in Liechtenstein. Then Marcos started to get really clever.”

Consider this possibility. That, in embarking on his clever spree of salting dollars and bullion abroad, the same Marcosian wit that would use “happy birthday” as a code key had also hilariously decided on using the name of Harry Stonehill’s lawyer — he who narked on Stonehill and caused a political earthquake in Manila implicating Marcos — as his (Marcos’) secret name. How he must have chuckled.