The myths of Edsa | Inquirer Opinion

The myths of Edsa 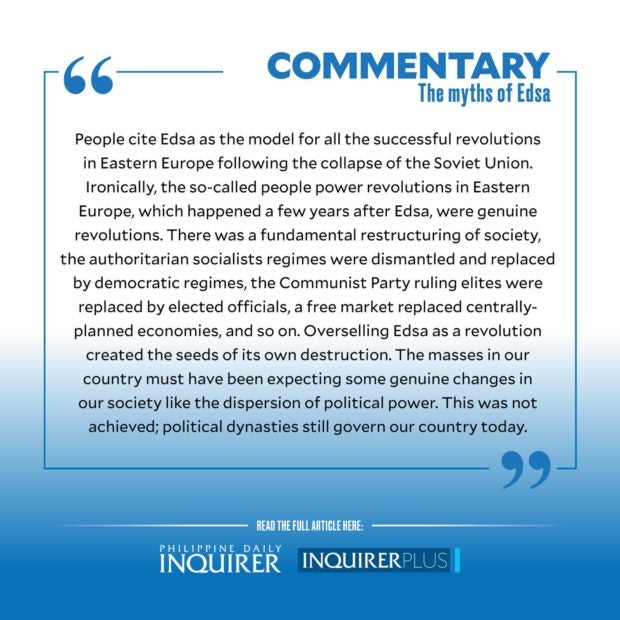 Let us prepare to write what could be the obituary of Edsa. A Bongbong Marcos victory in the coming election will consign Edsa to the dustbin of history, no thanks to some myths that eventually became its undoing. Let us unpack these Edsa myths one by one:

It has consistently been called a “revolution.” This is a false characterization, as Edsa does not have the elements of a revolution. There was no substantial restructuring of society, no change in the composition of the ruling elite, and no redistribution of economic and political power. Edsa however meets the definition by that Italian philosopher and political scientist Vilfredo Pareto of being a “circulation of power among the elites.” One segment of our ruling class was replaced by another elite group; the masses were left out. (See also “Edsa I was not a revolution,” 02/18/16.)

It’s been said that Edsa was the first “people power”’ revolution of modern times when an authoritarian regime was overthrown by the people. The Iranians had actually staged a successful people power revolution in 1979 when they ousted the Shah. However, the groups advocating democracy in Iran allowed the ayatollahs and the Muslim fundamentalists to hijack their revolution. The Shah’s repressive regime was replaced by an even more repressive one.

People cite Edsa as the model for all the successful revolutions in Eastern Europe following the collapse of the Soviet Union. Ironically, the so-called people power revolutions in Eastern Europe, which happened a few years after Edsa, were genuine revolutions. There was a fundamental restructuring of society, the authoritarian socialists regimes were dismantled and replaced by democratic regimes, the Communist Party ruling elites were replaced by elected officials, a free market replaced centrally-planned economies, and so on.

Overselling Edsa as a revolution created the seeds of its own destruction. The masses in our country must have been expecting some genuine changes in our society like the dispersion of political power. This was not achieved; political dynasties still govern our country today. The provision in our Constitution against political dynasties remains an unfulfilled promise by Edsa. The concentration of political power leads to the concentration of wealth, and vice versa.

The liberation theologians in Latin America call out the concentration of wealth as oppression per se. They claim that oppression cannot be eliminated as long as wealth remains in the hands of a few. Such oppression lasts the entire lifetime of the poor. The repressive regime of Ferdinand Marcos lasted but 14 years, and that of Mr. Duterte six years. On the other hand, the residents in our shanty towns live an entire lifetime of poverty and oppression. No wonder then that the issue of atrocities against the Marcos and the Duterte administrations has not been effectively discussed in the current elections as revealed by the latest surveys showing the sizeable lead of the Marcos-Duterte tandem.

The citizens of the “tiger economies” of Asia, such as South Korea, Taiwan, Hong Kong, and Singapore reached First World status in one generation, or about 30 years. They did this by attaining double-digit increases in their gross domestic product yearly. People born into poverty at the start of their development were rescued from poverty toward the end of their lives. No doubt impoverished Filipinos are expecting the same. However, in the same length of time lasting one generation, the incidence of poverty in our country has remained stagnant. This has reflected badly on the promise of Edsa.

Whoever wins the coming elections will be faced with the same problem: how to telescope development within one generation and liberate the masses from poverty. We are still trying to settle this issue through the ballot, but this option may not last forever. At some point, the perpetually impoverished may decide to turn to more radical ideologies to satisfy their desire for development and relief from oppression.

Hermenegildo C. Cruz is a career ambassador and served in the Department of Foreign Affairs for 32 years. He was assigned in the Soviet Union and witnessed the genuine revolutions which transformed the USSR and its Eastern European satellite countries into democracies in the last decade of the 20th Century.