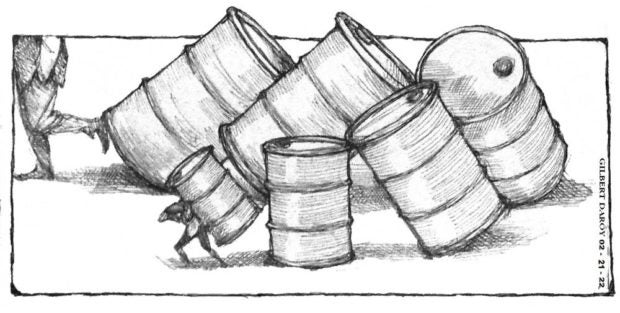 Pump prices of petroleum products have been increasing relentlessly, to the detriment of motorists, consumers, and businesses. Since January, gasoline prices have risen by P7.95 a liter, diesel by P10.20, and kerosene by P9.10. This is on top of last year’s net increases that amounted to more than P10 a liter. The inevitable results are higher transport fares and a rise in food prices, adding to consumer woes just as the country’s economy is poised to recover from the pandemic.

Prices of imported oil are rising because global supply remains very tight. The cost of Dubai crude — considered as the Asian benchmark — has climbed to around $90 a barrel from just a little above $60 a year ago. Among the factors affecting global supply are the anticipated disruptions due to escalating tension between Russia and Ukraine, the declining reserves of the Organization of Petroleum Exporting Countries cartel, and the low global inventory of crude and refined products.

Since the Philippines imports the bulk of its petroleum needs, the unabated fuel price increases are expected to dampen what could otherwise be a robust consumer-driven economic recovery this year. In an interview with the Inquirer, Bank of the Philippine Islands lead economist Jun Neri said this could push the country’s inflation up, and result in rising costs of utilities such as water and power. The increase in the prices of petroleum products, the Manila Electric Co. (Meralco) announced, would translate into higher electricity rates this month.

FEATURED STORIES
OPINION
Education and the state of the Filipino family
OPINION
‘Maid in Malacañang’: A biased review
OPINION
Go for the ‘big circle’!

The impact of higher fuel prices on fishermen is worse. According to Anakpawis national president Ariel Casilao, fishermen have to cut fishing activities to only four to six hours a day from the usual six to eight, and from four to five days to only three days a week, because that was all the time allowed by the amount of fuel they could still afford to buy. The resulting decline in income — and fish supply in the market — could lead to want and hunger in this sector. The Department of Agriculture must immediately implement the P500-million fuel discount for qualified farmers and fisherfolk.

An oil-importing country such as the Philippines is hostage to the volatility of crude prices in the international market. This is not to say that the government cannot do anything to at least mitigate the impact of rising fuel prices especially on the most vulnerable sectors and ordinary consumers. The Department of Energy (DOE), for instance, must ensure the implementation of competitive pricing under the deregulated oil industry regime. It can use moral suasion to urge profitable oil companies to heed the clamor of worried consumers for help. The government must also start implementing targeted relief assistance, particularly to public utility drivers, fisherfolk, and the poorest of the poor.

Last week, Sen. Grace Poe called on the government to immediately distribute cash subsidies to public transport drivers funded by the 2022 national budget following the increase in fuel prices for the seventh time this year. The Pantawid Pasada Program received P2.5-billion funding this year as subsidy for qualified PUV drivers. Poe said an additional P5 billion in an unprogrammed fund also authorized by the 2022 national budget for the drivers’ subsidy can be released once it becomes available. The fund is sourced from excess revenue collection or additional approved loans, she added.

Oil companies should heed the senator’s call for them to help the country by offering lower prices and granting discounts instead of focusing on making profits at this time. “It is unacceptable that companies are raking in so much profit while our fellow Filipinos are further mired in poverty,” Poe lamented. Oil companies should also be prodded to absorb part of the increased costs of importing or processing crude oil and petroleum products.

The DOE earlier said oil prices were expected to continue their uptrend through this month, or until the end of winter that has traditionally boosted demand for heating oil. Hopefully, the burden could be eased by government efforts to offer relief to affected sectors and its call for oil companies to temper their profits.

Motorists should meanwhile look for gas stations offering the lowest price, with many of them now providing discounts of from P1 to P4 per liter, according to the DOE. Trips should be planned and unnecessary travel avoided to save on gas. The most cost-efficient routes can be plotted as well, while ordinary consumers can practice energy-saving tips. They may sound like temporary measures but are surely necessary for us to survive this setback, as the country continues to hope that the geopolitical and supply issues affecting oil prices would ease soon.