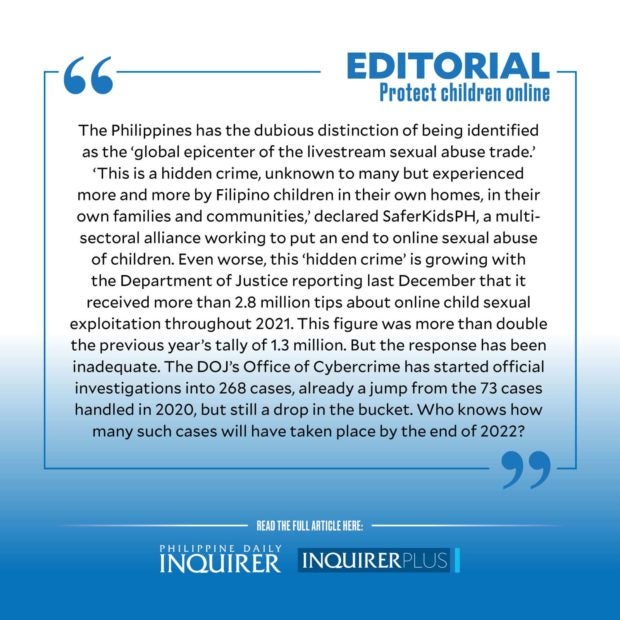 The Philippines has the dubious distinction of being identified as the “global epicenter of the livestream sexual abuse trade.”

Even as households all over the country, but especially in underserved areas that enjoy little or no connectivity, struggle to provide communications for students availing of homeschooling or employees working from home, it seems that families who have access to these devices are using them for less savory purposes.

A growing number of families, studies have shown, is subjecting their children to sexual exploitation and abuse. These days, the practice has taken on a “techie” edge, with much of the sexual exploitation taking place online. Many parents, older relatives, or pimps argue that since there is no physical contact between the child and customer, there is no “real” harm taking place. But they forget (or ignore) the psychological and emotional damage that children endure, the shame that takes root in their psyche, and the growing resentment at the way that adults whom they trusted had bargained away their innocence and youth.

Also ignored is the fact that once stored in digital format, the image of a child being sexually exploited lives on forever, and remains accessible to anybody anywhere.

“This is a hidden crime, unknown to many but experienced more and more by Filipino children in their own homes, in their own families and communities,” declared SaferKidsPH, a multisectoral alliance working to put an end to online sexual abuse of children. Even worse, this “hidden crime” is growing with the Department of Justice reporting last December that it received more than 2.8 million tips about online child sexual exploitation throughout 2021. This figure was more than double the previous year’s tally of 1.3 million. But the response has been inadequate. The DOJ’s Office of Cybercrime has started official investigations into 268 cases, already a jump from the 73 cases handled in 2020, but still a drop in the bucket. Who knows how many such cases will have taken place by the end of 2022?

A “National Study on Online Sexual Abuse and Exploitation of Children in the Philippines,” an effort led by the United Nations Children’s Fund (Unicef) in collaboration with other child rights groups, found that poverty is cited as the main reason families engage in this trade. Perpetrators, the study found, are usually foreigners who offer older children education or money in exchange for sexual images or videos. Relatives, neighbors, family friends, if not the parents themselves, act as facilitators, forcing children to undress or perform sexual activities in front of the camera.

Just last week, Unicef’s Philippine representative Oyunsaikhan Dendevnorov publicly declared that it was “imperative that we continue our efforts in safeguarding our children on digital platforms.” Even as the House of Representatives and the Senate are going after digital platforms and internet service providers for a variety of offenses, from money laundering to phishing to breaching privacy laws, legislators have likewise turned their attention to online child sexual exploitation.

Unicef called on the government and civil society “to synergize and to put children’s rights and protection at the forefront of digital efforts.” The group also urged lawmakers, even in the heat of the electoral campaign, to pass a bill regulating if not criminalizing online sexual abuse and exploitation of children and asked for its “effective implementation if enacted.”

Now that COVID-19 numbers are falling and authorities are predicting the imminent return to a “new normal,” perhaps the “whole of government” as well as civil society and communities and families can start building back better by prioritizing the welfare of children.

UN statistics show that the pandemic exacerbated children’s vulnerability to violence and exploitation. Globally, around 1.8 billion children in 104 countries were left even more vulnerable to violence, despite surviving or avoiding the disease.

In a high-level dialogue held last year, delegates, including children, said the impact of the pandemic and the measures employed to control contagion, including confining children indoors and depriving them of interaction with other children, are “placing children in situations of risk.” Now that things are looking better, we as a country can use the time and opportunities afforded us to more energetically and proactively protect our children, even from their abusive parents, and thereby help create the rosy future they deserve.