Making the case for teaching debate 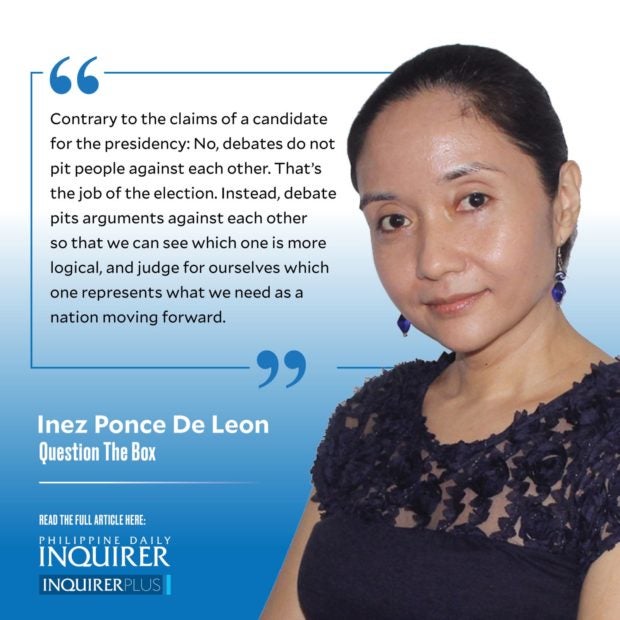 In a previous column, I talked about debate, and the classes that had formed my happy memories of high school in St. Scholastica, Manila. Sadly, many high schools, including mine, no longer require debate classes. Given the rather disconcerting state of social media “discourse,” and how debate seems to be confused with empty, violent confrontation, perhaps it’s time these classes were brought back.

Contrary to the claims of a candidate for the presidency: No, debates do not pit people against each other. That’s the job of the election. Instead, debate pits arguments against each other so that we can see which one is more logical, and judge for ourselves which one represents what we need as a nation moving forward. Debating means using credible evidence to back up a claim, to focus on an argument instead of focusing on a speaker, to take nothing personally. No vague assertions. No motherhood statements.

Therefore: No, it is not negative campaigning. A good debate should clarify issues and aid decision-making.

But why debate at all, and why learn it?

When we first studied and practiced debate, we found ourselves forced to think systematically and quickly, and to use the training and lessons we had been given in our first two years of high school. We had to anticipate our opponents’ arguments, which meant that we had to read about all sides of an issue, acknowledge the weaknesses and strengths of different arguments, speak concisely, and, later, attempt to dismantle our opponents’ logic. We could not use isolated sources to back up our claims. Reliance on a single TikTok video without backup books and articles would have kicked a team out of the debate hall.

Debate also teaches healthy skepticism. As debaters, our first impulse when confronted with a claim is to check its veracity, rather than accept it outright (or worse, share it).

There are very few condemnations of debate, most of them built on a misunderstanding of the nature of debate rather than empirical data. For example, some writers contend that debate encourages polarization and teaches students to be confrontational. Debate classes, however, trained us to listen to other peoples’ views and acknowledge them, even if we never experienced their struggles, even if we might never be in their position.

One worry I once overheard about debate was how it might foster “disrespect” because children would be encouraged to speak up against their elders.

Perhaps it’s time we bring back debate to classrooms. Perhaps it’s also time that we cultivate a sense of respect for the common good, instead of fear of private reprisals. We have only ourselves to blame when people do not read beyond one-liners, react violently to headlines, or rely on short but misleading videos alone to guide their understanding of an issue.

We have no one else to blame if we elect a president whose behavior we would not even tolerate in our classrooms.