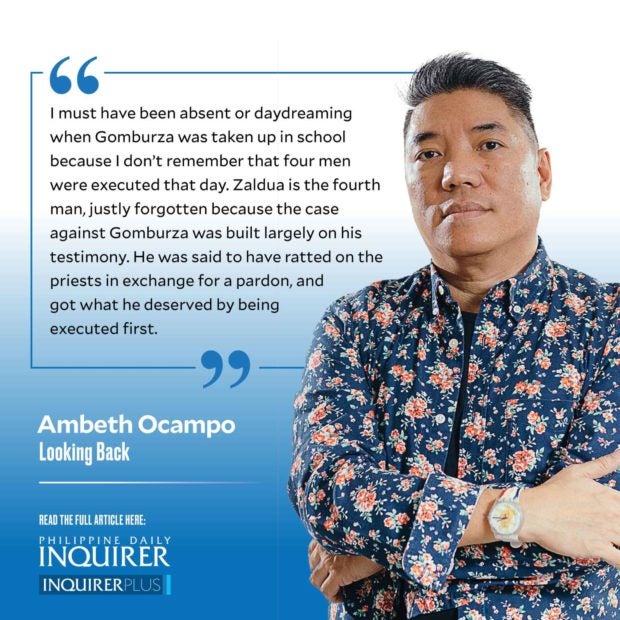 Pandemic physical distancing discouraged me from going to Rizal Park yesterday to commemorate the 150th anniversary of the execution of Jose Burgos, Mariano Gomes (with an “S” not a “Z”), and Jacinto Zamora. Bur-Go-Za would be their acronym if we followed alphabetical order. Gom-Za-Bur if we follow the order of their dispatch by the garrote in Bagumbayan now Rizal Park. Gom-Bur-Za is the order set by Jose Rizal when he dedicated his second novel, “El Filibusterismo,” to the martyr priests.

In the original manuscript of the “Fili,” the dedication page reads:

In the first edition of the “Fili,” published in Ghent in 1891, the dedication reads:

I must have been absent or daydreaming when Gomburza was taken up in school because I don’t remember that four men were executed that day. Zaldua is the fourth man, justly forgotten because the case against Gomburza was built largely on his testimony. He was said to have ratted on the priests in exchange for a pardon, and got what he deserved by being executed first.

Mariano Gomes was the first priest to go. Born in Santa Cruz, Manila, on Aug. 2, 1799, he was the oldest and most venerable of the three; well-known for his anti-Spanish sentiment, well-loved by parishioners in Bacoor that he served long and well. Eyewitnesses described Gomes as calm and resigned to his fate. His eyeglasses fell as he walked to the scaffold, and his famous last words were: “Let us go where the leaves never fall or move without the will of God.”

Jacinto Zamora went next. Born in Pandacan on Aug. 14, 1835, he was, at the time of his death, reading for a doctorate in canon law at the University of Santo Tomas. In 1860, he headed a student protest and was punished by being confined to quarters for two months. His juvenile act of subversion did not affect his appointment to parishes in Marikina, Pasig, and Lipa, but his subversive record was brought against him in 1872. Zamora’s fatal vice was gambling, specifically panguingue. His guilt and complicity in the Cavite Mutiny of January 1872 was built on a note in his confiscated mail. It was an innocent invitation to a card game that read: “Grand reunion … our friends are well provided with powder and ammunition.” Taken literally by the authorities, it sealed his fate even if it simply referred to money for an overnight card game. Witnesses marveled at Zamora’s amazing serenity at the execution site not knowing the priest had suffered a nervous breakdown. One could say that he was already dead before the garrote broke his neck.

Jose Burgos had the worst time, having heard the crank of the garrote followed by the sound of breaking necks thrice before his turn. He had just turned 35, having been born on Feb. 9, 1837 in Vigan, Ilocos Sur. He was the most distinguished among the three priests: He had doctorate degrees in theology and canon law, he was a prolific writer (though “La Loba Negra,” a novel attributed to him, is a 20th century forgery by Jose E. Marco), he was an accomplished swordsman and boxer, and he was appointed to some responsibilities at the Manila Cathedral.

Burgos’ death was the most dramatic, as retold in detail by the Frenchman Edmond Plauchut, who said he was in a bad state. Before the hood was placed over his head in preparation for execution, Burgos stood abruptly from the garrote seat and shouted: “What crime have I committed to deserve such a death? Is there no justice in the world?” Then 12 friars restrained him and calmed him down with advice to accept a Christian death. Pushed back into the seat, Burgos sprung up again shouting: “But I haven’t committed any crime!” At that point, one of the friars holding him down hissed: “Even Christ was innocent!” That remark calmed Burgos who then accepted his fate after pardoning his executioner and giving one last blessing that brought the curious crowd to their knees.