The ‘social weather’ during martial law 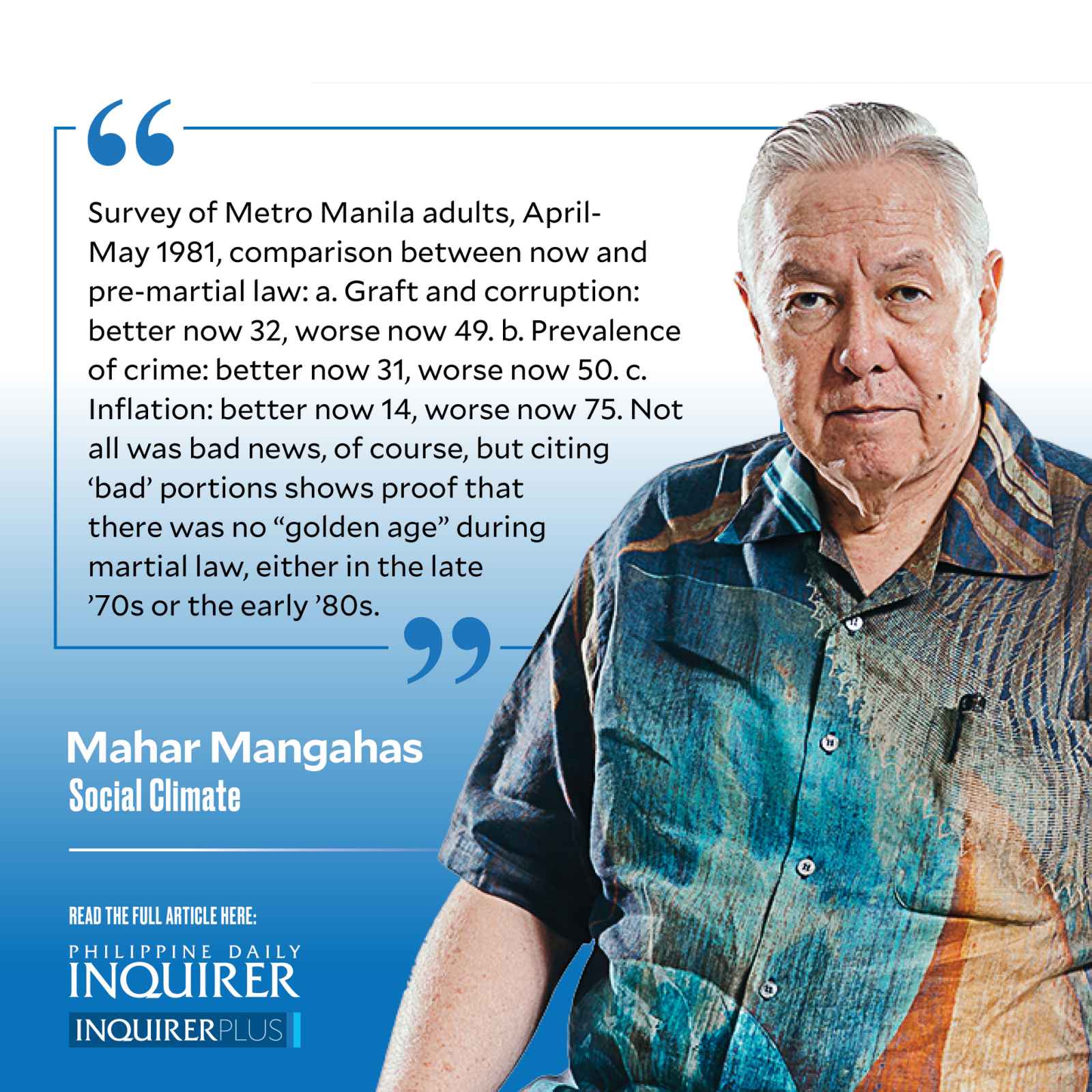 Directing the social indicators project of the Development Academy of the Philippines in 1974-75 made me the leading Filipino expert on the subject. My paper on it was in Social Indicators Research, the top international journal, in 1977. UNICEF got me to take leave from the University of the Philippines faculty to be social indicators adviser at the Malaysian prime minister’s department in 1977-78, and the Indonesian central bureau of statistics in 1981. I was one of the lecturers in the University of Sussex’s social indicators training course in 1979.

In 1981, I accepted the invitation of Jose P. “Ping” de Jesus, DAP executive vice president, to be DAP vice president for research. He had been EVP since December 1977, when his predecessor Horacio “Boy” Morales dramatically defected to the National Democratic Front, and thereby put DAP’s loyalty to the martial law regime into serious question. One of Ping’s tasks was to help DAP president Onofre D. Corpuz to recover DAP’s reputation in the eyes of Marcos.

At DAP, I headed a new Research for Development Department, abbreviated RfD with a small “f.” My book, “The Philippine Social Climate: From the SWS Surveys,” Anvil 1994, narrates: “With a small force of interviewers, RfD did a series of quality of life surveys, several in Metro Manila in 1981 and 1982, and one in the entire country over March-May 1983. These surveys, funded mainly by the President’s Center for Special Studies, are now especially valuable as a source of statistically-representative data on Filipino perceptions of political and economic conditions prior to the assassination of Ninoy (Aquino) in August 1983.

“Thus RfD provided PCSS, for a short while, with a survey data base capable of informing the President about poverty, about his performance rating, and about many other matters missing from conventional statistical sources. … The DAP was about to publish a book, Measuring the Quality of Life: A 1982 Social Weather Report, containing the 1981-82 RfD surveys, but suddenly changed its mind just before printing in early 1983. … We never knew what was objectionable about the book or who objected to it.”

The book, authored by myself, Felipe B. Miranda, and Vicente B. Paqueo, already had an International Standard Book Number, ISBN 971-152-000-1. I think a preview in the newspaper Business Day had alerted Marcos’s DAP-watchers to possibly uncomfortable bits of the book.

Below are examples noticeable in pre-publication galley proofs. The proofs are in the libraries of DAP, the UP School of Economics, and SWS; researchers may request an e-copy from [email protected] The numbers are percentages of those surveyed; missing balances from 100 are fence-sitters and refusals to reply.

Table 20. Survey of Metro Manila household heads, March-May 1981: a. “People are usually afraid to walk in the streets of their neighborhood for fear of being robbed,” agree 52, disagree 31. b. “People are usually afraid that robbers might try to break into their houses,” agree 71, disagree 18. c. “Most crimes are solved by the police,” agree 33, disagree 45. d. “Whether rich or poor, people involved in court cases receive fair treatment,” agree 38, disagree, 48.

Not all was bad news, of course, but citing “bad” portions shows proof that there was no “golden age” during martial law, either in the late ’70s or the early ’80s.

I helped with the 1984 survey of the Bishops-Businessmen’s Conference, and, predictably, had to leave DAP. Unrepentant, I helped BBC again in 1985, and got the SWS surveys started in 1986. The story continues.