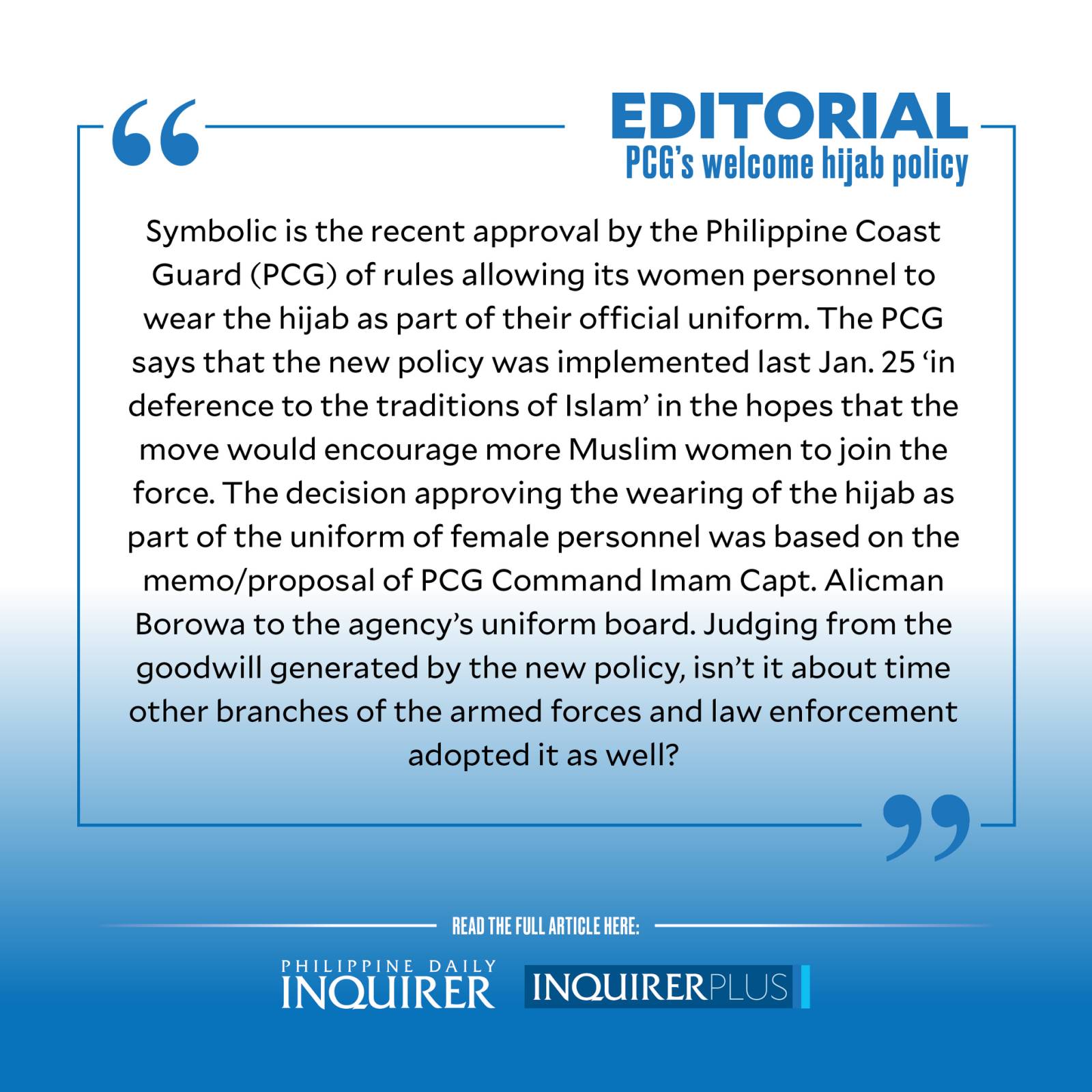 Depending on one’s point of view, the “hijab,” defined as a veil worn by many Muslim women that covers mainly the head, chest, and shoulders in the presence of any male outside the family, can be either a symbol of religious freedom or an imposition on a woman’s freedom of expression.

Islamic texts teach that wearing a covering is part of the general admonition for Muslim women and men to dress and behave modestly. But in many instances, wearing a hijab has become a trigger for discrimination and abuse, if not ridicule or pity, instead of the symbol of faith and piety that Muslim women insist it is.

Symbolic, then, is the recent approval by the Philippine Coast Guard (PCG) of rules allowing its women personnel to wear the hijab as part of their official uniform. The PCG says that the new policy was implemented last Jan. 25 “in deference to the traditions of Islam” in the hopes that the move would encourage more Muslim women to join the force.

The new policy was also announced in time for World Hijab Day last Feb. 1, celebrated worldwide to “recognize the millions of Muslim women who choose to wear the hijab and live a life of modesty.” World Hijab Day, first observed in 2013, also encourages women, regardless of religious beliefs, to wear and experience the hijab at least one day in the year, while allowing non-Muslim women, organizers say, to “understand the essence of covering and religious freedom.”

The decision approving the wearing of the hijab as part of the uniform of female personnel was based on the memo/proposal of PCG Command Imam Capt. Alicman Borowa to the agency’s uniform board. In his memo, Borowa said that other uniformed services like the Armed Forces of the Philippines (AFP) and the Philippine National Police (PNP), as well as those of other countries like New Zealand, the United Kingdom, and the United States have already initiated moves to include the hijab as part of the authorized uniform for female Muslim personnel.

As of March 2021, says a report in this paper, there were 1,850 Muslim PCG personnel, with some 200 of them being women. Former PNP public information chief Brig. Gen. Roderick Augustus Alba says that the proposal to include the hijab as part of the uniform of female police officers is still pending before the National Police Commission, though the Bangsamoro regional police is already encouraging its female personnel to adopt the practice. The move should also encourage more Filipino Muslim women to join the currently male-dominated police force. The wearing of hijab is protected under the Magna Carta of Women passed in 2009.

The PCG policy, says the Commission on Human Rights (CHR), “highlights that wearing a hijab is an exercise of Muslim women’s freedom of religion and free expression.” CHR Commissioner Karen Gomez-Dumpit adds that it fulfills the mandate in the Magna Carta of Women providing for the recognition and respect of the “rights of Moro women to practice, promote, protect, and preserve their own cultures, traditions, and institutions.”

Hijab-wearing soldiers and police have also proven their worth, not just as law enforcers, but also as symbols of cultural openness and inclusivity.

In 2019, the Zamboanga regional police office formed its own “hijab contingent” of 33 Muslim female police officers. At the Southeast Asian Games the same year, police officers wearing hijab and taqiyas (skullcaps worn by male Muslims) were specifically deployed in the billeting areas of athletes from predominantly Muslim countries such as Brunei, Indonesia, and Malaysia.

But the wearing of religiously-inspired or mandated clothing need not be limited to being symbolic and politically correct. It can also be seen as part of the larger effort to create a truly inclusive society where religion, culture, and tradition are respected and protected, thereby forming a truly civil and peaceful society.

Public reaction to the hijab policy, it seems, has been mostly positive, at least judging from social media posts after the photos and guidelines were released. A report says the new policy garnered 15,000 reactions, with more than 9,100 heart emojis, 5,400 likes, and 260 care emojis.

“Wow! Congrats to the Filipino Muslim Community aspiring to be part of PCG! This is inclusive development in action! Alhamdulillah!” says one Facebook commentator. Writes another user: “Thank you, PCG, for recognizing our religious and cultural rights.”

Judging from the goodwill generated by the new policy, isn’t it about time other branches of the armed forces and law enforcement adopted it as well?