The one who runs, the one who hides | Inquirer Opinion 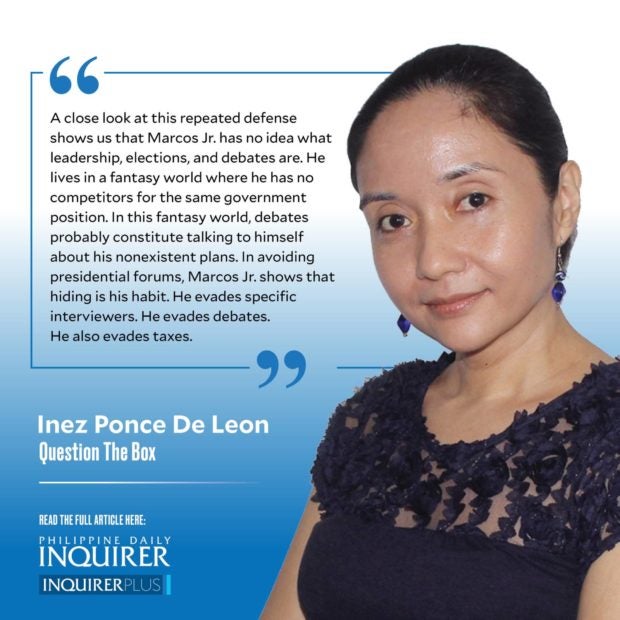 The presidential forum last week gave us a glimpse into the candidates’ brand of leadership.

Moreno seemed in love with technology as the solution to everything, but his ability to mobilize people on a national scale was not evident. Perhaps he can continue to work at local levels and streamline faulty systems that need a stronger digital backbone.

Pacquiao drew upon personal experience but could not extrapolate his insights to policy. He has to attend Senate sessions more faithfully so that he can get experience in writing laws and regulations, and so that his sincerity as a politician can be matched with government know-how.

Lacson felt like a vacuum cleaner: He would use force to push out corruption, and force to change the system from the top down. This technique might work if he were the secretary of the Department of the Interior and Local Government, as he seems well versed with department-level strategies.

De Guzman had many interesting ideas. These needed a stronger grounding in policy, however, so he might work best with policymakers in crafting laws that can help marginalized groups recover and thrive despite the challenges of the pandemic.

Robredo, despite internet problems, was still able to present her programs by linking her work in communities to national concerns and eventual action. She was once again the manager who could unite disparate groups while maintaining her composure in the face of a crisis that was clearly out of her control.

A close look at this repeated defense shows us that Marcos Jr. has no idea what leadership, elections, and debates are. He lives in a fantasy world where he has no competitors for the same government position. In this fantasy world, debates probably constitute talking to himself about his nonexistent plans.

In avoiding presidential forums, Marcos Jr. shows that hiding is his habit. He evades specific interviewers. He evades debates. He also evades taxes.

What did Marcos Jr. do during the presidential forum? Get interviewed by Korina Sanchez. The photos of him doing a cooking demo in her kitchen hammered the point further: Marcos Jr. participates only in situations that put him at the center, only in engagements where nobody can share the spotlight, only in events that can portray him as down-to-earth, reliable, relatable. All things that he is not.

Pundits might claim that Marcos Jr.’s evasion of the major political forums is his way of “preserving his lead.” Look closely at the language of this phrase, however: It concentrates on getting the majority vote, but says nothing about the ability to take on the actual responsibility of the post. It sounds almost like the common ill of so many who pursue higher degrees: They fall in love with the idea of getting a title, but crumble when faced with the actual work they need to do when they graduate.

Regardless of who attempts to explain Marcos Jr.’s absence, a common theme emerges: The son of the former dictator avoids any situation that will challenge him.

But what is the job of a president if not a challenging one?

A president has to represent the country, whether facing allies or foes. There are international meetings to attend, other leaders to speak with, experts to consult, investments to be encouraged. There is the damage of the last six years to be undone: the withdrawal from international treaties and organizations, the constant incursions by Chinese militia in the West Philippine Sea, the drug war, the shaky economy. There will be thousands of issues more: poverty, natural hazards, education, food security. And then there’s the media, both local and international, asking questions, questioning answers, even debating with the president. Inevitably, there will be critics who will constantly speak up, curse, or even send death threats.

None of this can be avoided. True leaders do not evade responsibilities. Presidents do not pick and choose their problems.

But we can pick a true leader, and it’s definitely not the one that hides while thirsting for applause.