A bill meant to combat criminal activities, especially the proliferation of digital fraud, through mobile phones, has morphed into a piece of legislation that could potentially be used to stifle legitimate expressions of dissent in the online sphere.

After it was ratified by the Senate and the House of Representatives earlier this month, President Duterte now has on his desk what would become the SIM Card Registration Act if he signs it into law.

As with most bills, it began with noble intentions. The objective was to require the registration of all current and future prepaid subscriber identification module (SIM) cards to allow legitimate authorities to identify their true owners, if needed.

The idea was to put an end to scams, criminal activities, and even terrorism that were being enabled by mobile phones whose owners were insulated from identification and prosecution by prepaid SIM cards that could be bought cheaply from neighborhood stores, with not even the most basic IDs required from the buyers.

The best part of this proposed law is that it will put prepaid SIM cards on equal footing with their postpaid counterparts in terms of owners’ registration. Once enacted, any legitimate authority will be able to identify the mobile phone user whether the person is connecting using a prepaid or postpaid card.

For the prepaid SIM card user with fraud in mind, an anonymously-owned prepaid SIM card could now mean he could create fictitious online transactions accounts on his mobile phone, fool unsuspecting parties with “phishing” or “smishing” text messages, or even make cruel pranks like ordering thousands (or millions) of pesos of food online and have them sent—cash on delivery — to unsuspecting recipients.

But the holder of an unregistered SIM card can also create anonymous social media accounts and troll people online to their heart’s content, using the vilest language they could muster and the most preposterous fake news they could make up.

Under the bill that was forwarded to Mr. Duterte after the bicameral conference committee report was ratified by both houses of Congress, the use of fictitious identities to register SIM cards or social media accounts will be penalized with imprisonment of no less than six years or a fine of up to P200,000, or both. 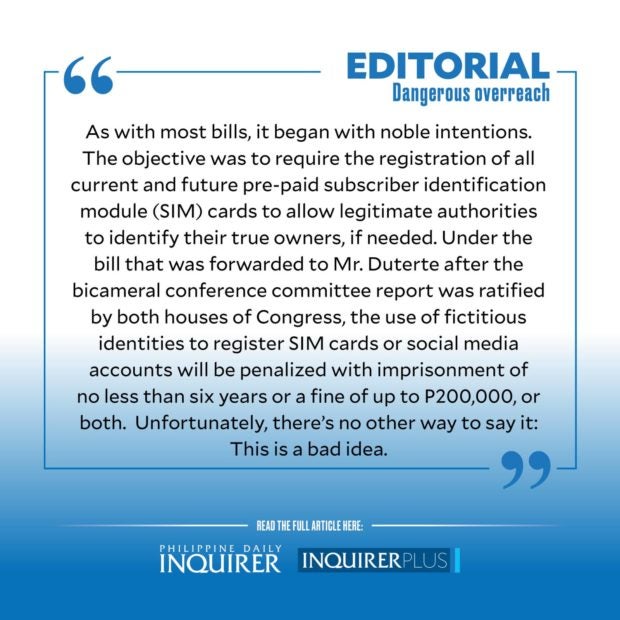 Unfortunately, there’s no other way to say it: This is a bad idea. The fraudsters are deservedly legitimate targets of this proposed law. But there is a fine line between fighting trolls and impinging on freedom of expression.

What’s even more disappointing is that the Senate—normally a bastion of democracy and a staunch guardian of civil liberties in this country—voted unanimously in support of this provision with no abstentions and no oppositors.

Understandable maybe since several senators have been on the receiving end of some of the vilest forms of online trolling on their social media accounts. Some of the criticism have been valid, some have been unfair, and some have been outright libelous (for which at least one party has been successfully prosecuted). But hurt pride and ego is a bad reason to pass a bill that could adversely impact Filipinos’ freedom of expression, which is already under assault from many sides these past few years.

SIM card registration is sufficient for the country’s requirements. But requiring verified identities for social media accounts is an overreach that threatens democratic expression and legitimate dissent. There is also a concern about the provision requiring telecommunications companies to submit the registration information of users to a central database accessible by the National Telecommunications Commission and the Department of Information and Communications Technology, which according to Sen. Leila de Lima, could be abused to intrude on people’s privacy.

With SIM card registration, a troll that libels another party can—with the use of the appropriate technology—be identified by authorities and be made to face the consequences of his actions as we have seen recently. With SIM card registration, the device by which the libelous content was posted can be identified. (Note that libelous posts can also be tracked down by authorities through their internet service providers and to specific devices, even when made from laptops or desktops.)

It is a good idea for prepaid SIM cards sold in the Philippines to be registered, just like in 155 other countries around the world. But tucking in a requirement for banning fictitious social media accounts under this proposed law is a shortsighted move that could erode freedoms enjoyed by Filipinos significantly in the future. With the Philippines tagged as the “social media capital of the world,” this dangerous provision looks ominous.

The President is presented with a unique opportunity to preserve and strengthen Philippine democracy, and could surprise even his staunchest critics if he vetoes this SIM Card Registration Act in its present form.

Read Next
The risks of not voting on Pharmally report
EDITORS' PICK
Do all the things you do, faster
Nothing’s certain so here’s how everyday Filipinos can make the most out of their Plan B
PNP vows to bring justice for slain Percy Lapid; says probe underway
Percy Lapid’s kin: ‘We demand that his cowardly assassins be brought to justice’
House energy committee chair Arroyo bats for cheap electricity
‘Seniority’ requirement despite vacant posts in DOH bothers senators
MOST READ
Student stabs teacher dead in Samar town
Trixie Angeles quits as press secretary due to health reasons
Not rehired?: Trixie Angeles not on list of reappointed Cabinet execs
Heart Evangelista to stay abroad ‘indefinitely’: ‘Hindi muna ako babalik’
Don't miss out on the latest news and information.