Women at the top 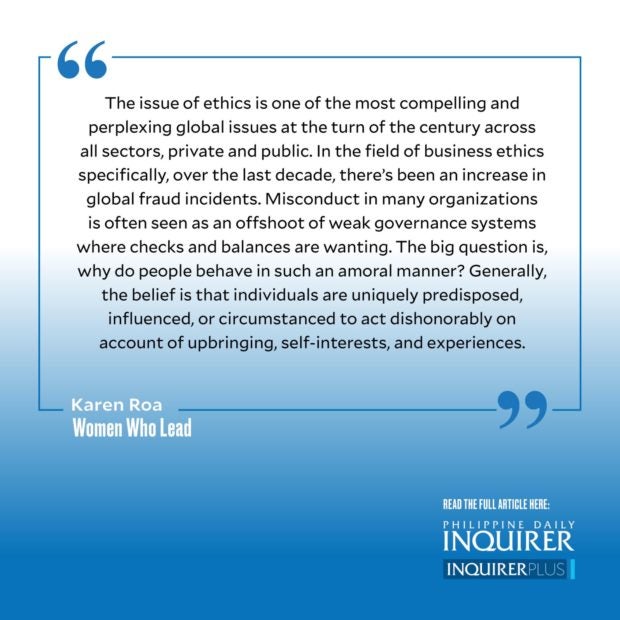 The issue of ethics is one of the most compelling and perplexing global issues at the turn of the century across all sectors, private and public. In the field of business ethics specifically, over the last decade, there’s been an increase in global fraud incidents. Misconduct in many organizations is often seen as an offshoot of weak governance systems where checks and balances are wanting.

According to the 2019 PWC Global Fraud Report, asset misappropriation, bribery, and corruption are the highest threats to sustainability. Employee malfeasance represents almost 40 percent of all corporate business crimes and misconduct.

The big question is, why do people behave in such an amoral manner?

Generally, the belief is that individuals are uniquely predisposed, influenced, or circumstanced to act dishonorably on account of upbringing, self-interests, and experiences. That one’s knowledge of right or wrong, good or bad stems from teachings and exposure at an early age. It emanates from both the inner circle of influence of parents, relatives, and peers, as well as the observance of long-standing and universally accepted norms.

However, there has also been increased focus on gender differences as a subset of business ethics. Numerous researchers have found variations between males and females in their ability to understand and address business ethical considerations. Overall, these studies argue that women tend to behave more ethically.

American psychologist Lawrence Kohlberg states that men and women respond differently to the same set of conditions. Scholar Galbraith determines males and females use similar decision rules regardless of ethical situations. There is one study found that reflects a neuroscience approach to determining the difference between males and females in relation to business ethics. This new neuroscience finding determines that the difference is due to varying brain structures and chemistry between men and women. Using both disciplines of behavioral or neuroscience, men are said to be more transactional, individualistic, and concerned with justice and fairness, while women are transformational, collective, and concerned with compassion and equity.

These differences have significant implications to reputation, profitability, and overall sustainability of an organization. These findings all maintain that women behave more ethically and lend credence to proposals by several European countries to initiate proposing quotas for women in corporate boards. According to another study, having more women sitting on the board increases company value, financial performance, and ethical compliance.

Despite these studies, while 87 percent of global corporations have at least one female in senior positions, only 29 percent of senior positions are held by women. The question of woman governance and impact on organizational ethical behavior is therefore highlighted. Having women at top posts is a positive proposition and needs to be in every corporate board or leaders’ consciousness to be encouraged and supported.

How many of our Philippine organizations reflect a balanced gender distribution in senior positions including C-levels? Where are all the women? Perhaps it is high time for Philippine local corporations to review this organizational profile and promote more women at the Board and C-Levels?

Karen Roa is a Ph.D. candidate in leadership studies at the Ateneo de Manila University. Her interests lie in the study of women and ethics. She is also president of First Metro Asset Management, Inc. and a member of the Filipina CEO Circle.

Women Who Lead is an initiative of the Philippine Women’s Economic Network (PhilWEN).