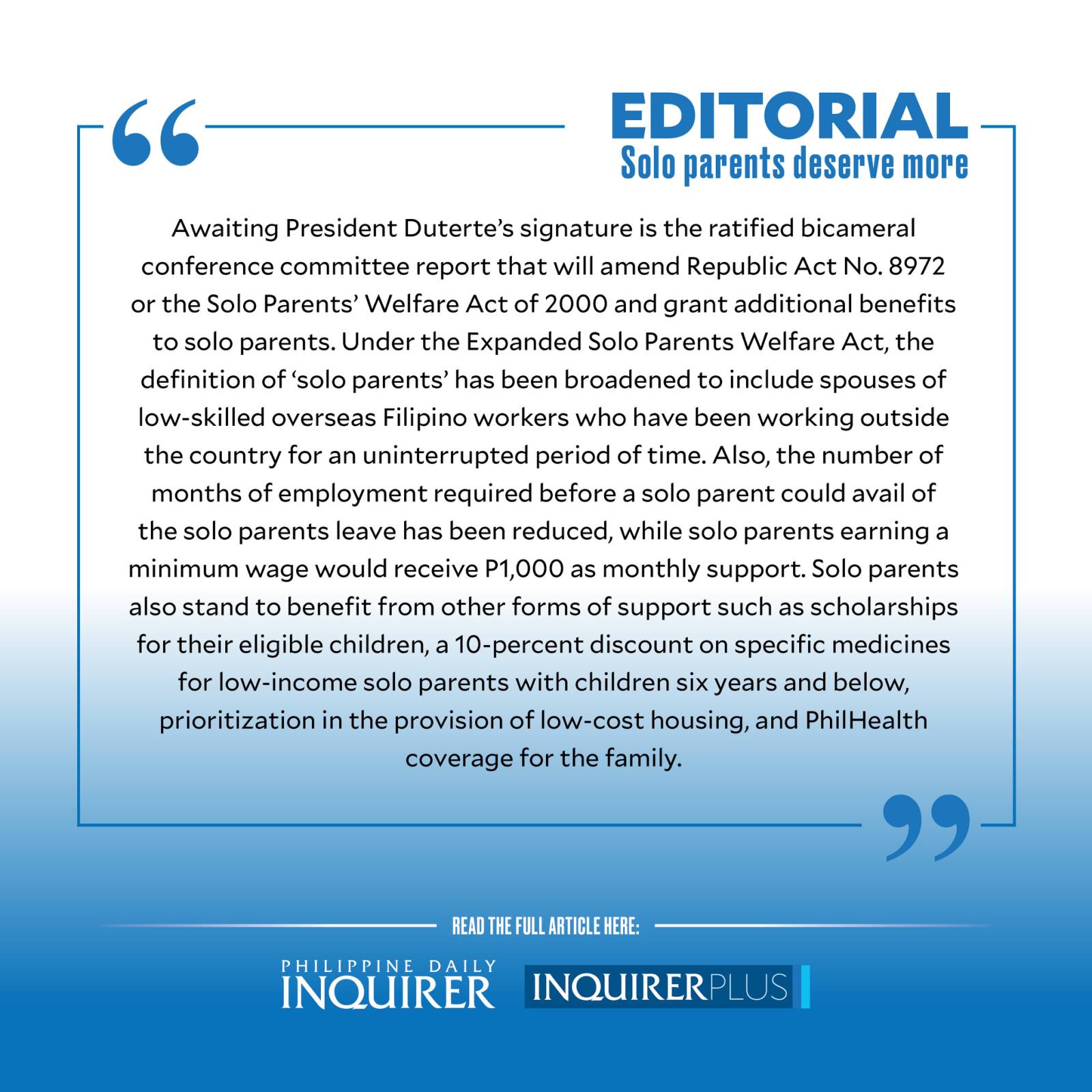 Awaiting President Duterte’s signature is the ratified bicameral conference committee report that will amend Republic Act No. 8972 or the Solo Parents’ Welfare Act of 2000 and grant additional benefits to solo parents.

Once the President signs it, the new law would be a landmark piece of legislation, putting a humanitarian stamp on an administration notorious for its “iron fist” approach to various problems, from the anti-drug campaign to putting an end to the communist insurgency, and addressing the challenges brought about by the COVID-19 pandemic.

Under the Expanded Solo Parents Welfare Act, the definition of “solo parents” has been broadened to include spouses of low-skilled overseas Filipino workers who have been working outside the country for an uninterrupted period of time. Also, the number of months of employment required before a solo parent could avail of the solo parents leave has been reduced, while solo parents earning a minimum wage would receive P1,000 as monthly support.

The age ceiling for children of solo parents has likewise been raised, to align the measure with the K-to-12 education policy. Solo parents also stand to benefit from other forms of support such as scholarships for their eligible children, a 10-percent discount on specific medicines for low-income solo parents with children six years and below, prioritization in the provision of low-cost housing, and PhilHealth coverage for the family.

Meanwhile, safeguards against fraud and leakage in the implementation of the new law were incorporated in the measure to ensure that only those who are really solo parents will enjoy its benefits.

However laudable the motivation for the grant of benefits to solo parents, concerns have been raised about the limited reach of the law and the controls put on the amount of assistance available to them. There were also questions why only daily wage earners among solo parents are entitled to the assistance provided by the law.

Agusan del Norte Rep. Lawrence Fortun, chair of the technical panel that refined the House version of the pending measure, assured that the estimated 15 million solo parents in the country are “not invisible citizens” and that the government “see(s) their suffering and act(s) to address their woes.”

Fortun explained that the caps put on the amount and reach of assistance to solo parents were meant to address the concerns of local governments, many of which claimed not to have the funds necessary to address the needs of all solo parents. But it must be pointed out that the implementation of the Supreme Court’s Mandanas-Garcia ruling, increasing the share of LGUs in tax allotments, offers a windfall to local executives truly desirous of helping out solo parents and their children.

The Department of Budget and Management has said that LGUs are the biggest beneficiaries of the “record” P5.024 trillion 2022 national budget signed recently. That’s because LGUs are due to receive a whopping P959.04 billion as their share of the budget through their national tax allotment (NTA), formerly called the internal revenue allotment or IRA. In contrast, the IRA last year amounted to only P695.49 billion. Surely, local governments could find within the over P200 billion difference the wherewithal to make more benefits available to more solo parents aside from those covered by the law.

The high tribunal granted in 2018 and reaffirmed a year later the petitions of Batangas Gov. Hermilando Mandanas and former Bataan Gov. Enrique Garcia Jr., ruling that the LGUs’ NTA should come from 40 percent of the collection of all national taxes by the Bureau of Internal Revenue and the Bureau of Customs. Previously, only taxes collected by the BIR fell under the 40-percent share of LGUs.

But there are serious doubts about the capability of many LGUs to spend their extra income efficiently, carefully, and honestly. The World Bank, for one, estimates that local governments might fail to spend as much as P155 billion from their windfall. Finance Secretary Carlos Dominguez III said last December that based on their estimates, the implementation of the Mandanas ruling would yield lower economic growth because local governments use funds less efficiently than the national government.

Perhaps it’s time for local governments to prove the national policy makers wrong. Expanding some more the coverage of the solo parents law would be a good way to start.