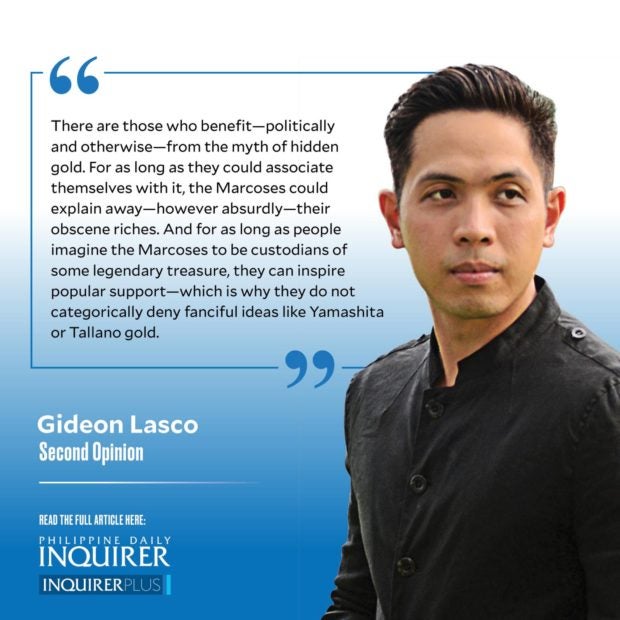 I have traveled to all the regions of the country and wherever I go, there are rumors of hidden treasure.

Surprisingly detailed, with descriptions of gold and platinum, of black Buddhas and emerald necklaces, of hovering helicopters and mysterious men, these tales are told by locals who are often convinced of their veracity.

Sometimes they would even point to the actual mountaintop where the treasure is supposed to be located.

“If only I had a metal detector!” mused one guide as we were hiking in the Kitanglad Range in Bukidnon. “Surely I would be a rich man.”

Sometimes, we would see actual proof of treasure hunts. Deep holes would suddenly appear in mountain summits and the locals would say that these were excavations for treasure.

Indeed, there were times when locals, unaccustomed to people climbing mountains “for climbing’s sake,” would view us with suspicion, especially if there’s a chinito (Chinese-looking guy) with us to remind them of the assumed Japanese provenance of the treasure. More than once, my trekking pole was mistaken for a metal detector.

Perhaps the closest thing I had experienced to an actual treasure hunt was in Sibutu Island in Tawi-Tawi. When the locals found out that my companion, Prof. Arnold Esguerra of UP Manila, had an archeology background, they led us to the place they claimed was visited by a Japanese man, and true enough, there was a small tunnel, which got everyone excited.

Alas, after long hours of waiting, the only thing we unearthed was a bomb, which was thankfully too old and corroded to have exploded in our faces!

All the rumors come from the supposed gold and jewels that the Japanese hoarded during their occupation of Southeast Asia and allegedly buried somewhere in the Philippines.

The treasure was named after General Tomoyuki Yamashita, “The Tiger of Malaya,” who was a key figure during the Japanese occupation of the Philippines. As the sun set on the “Greater East Asia Co-Prosperity Sphere,” Yamashita was given the unenviable task of resisting the Filipino-American forces of liberation. Ultimately, Yamashita was captured in Hungduan, Ifugao, and hanged in Los Baños, Laguna. But his legend lives on, with many books written and documentaries made about his supposed gold.

Historian Ambeth Ocampo sums up the dismissive view of most scholars about such claims: “What makes me wonder is that for the past 50 years, despite all the treasure hunters, their maps, oral testimony and sophisticated metal detectors, nobody has found a thing.”

Regardless of the treasure’s existence, however, how explain the persistence of these rumors?

One simple response is that there are actual treasures waiting to be found in our wilderness, speaking of the richness of our heritage. Go to the Ayala Museum and view all the gold artifacts if you need further proof that various treasures can actually be found in the Philippines. Recall that when Magellan came, his men could only marvel at the amount of gold people wore: earrings, necklaces, and even belts that will put even the most Imeldific of outfits to shame.

Then there are those who benefit—politically and otherwise—from the myth of hidden gold. For as long as they could associate themselves with it, the Marcoses could explain away—however absurdly—their obscene riches. And for as long as people imagine the Marcoses to be custodians of some legendary treasure, they can inspire popular support—which is why they do not categorically deny fanciful ideas like Yamashita or Tallano gold. Such is the power of myth that several years ago, tens of thousands flocked to Los Baños in hopes of receiving a tiny share of such imagined wealth.

Going back to the people I meet in my travels gives us a final clue. Most of them come from communities where opportunities are limited: kaingin, logging, charcoal-making, small-scale mining, farming, fishing—all of which still leave them wanting in terms of food on their table, education for their children, capital for a better life. “All I want is to finish high school and go to college,” as the 20-year-old Manobo guide in Bukidnon, who longed for a metal detector, told me. “If I find the gold, maybe I can visit you in Manila!”

Could the treasure actually be a metaphor, an idiom for a deeper sense of entitlement and loss?

Wealth that rightfully belongs to us, taken away by strangers, sought after and retrieved by the rich and the powerful.

A treasure that is still there, somewhere (at least in part), waiting to be discovered, seemingly so close, yet always beyond our reach.

Without realizing it, they were actually narrating their history.