BBM through his father’s eyes 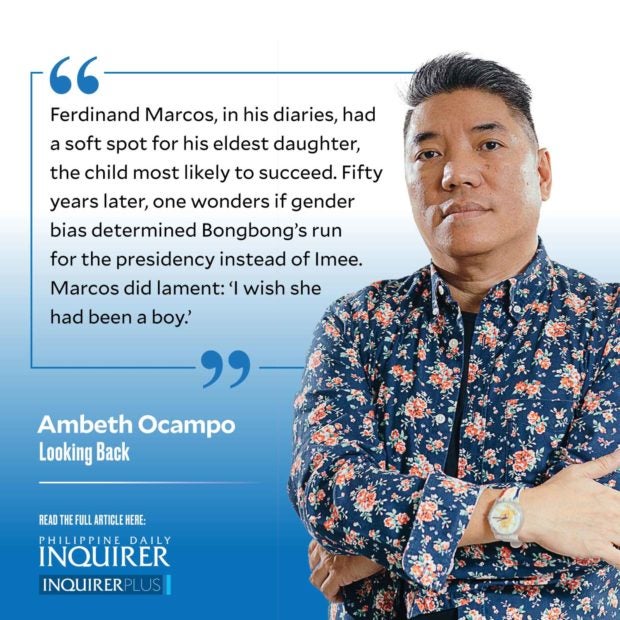 Ferdinand Marcos, in his diaries, had a soft spot for his eldest daughter, the child most likely to succeed. On April 20, 1970, a proud father turned up at Assumption to pin a medal on: “Imee [who] won the topmost honors in school.

In all her subjects … And her teachers were proud of her. An Ilocana teacher commented ‘Ti paria hangan nga agbunga ti tarong.’ (An apple tree will not bear orange fruit).” Fifty years later, one wonders if gender bias determined Bongbong’s run for the presidency instead of Imee. Marcos did lament: “I wish she had been a boy.”

Bongbong’s academics was a cause of concern. On March 15, 1970, Marcos wrote: “Imelda feels calamity has befallen us because she cannot control Bongbong who does nothing but play with his friends to the prejudice of his schooling. He has lost his star, missed two days homework and stayed up tonight with his two friends … It has reached the stage where I have warned him that I will throw his friends out of the Palace if they are overstaying. But I feel that the boy’s willpower has not developed enough.”

It was decided to send Bongbong to Worth, an English Benedictine boarding school for boys as recommended by Fr. James Donelan, Ateneo rector.

On June 28, 1970, Marcos reported: “There are some criticisms (specially Max Soliven) of the decision to send Bongbong to England but it offers the best education for a boy. In the Philippines, he is either spoiled or hated because he is the President’s son. And he has to learn to stand on his own. But he has to learn Ilocano before he goes. So, I may send him to the North first.” Marcos wanted his son to be rooted before he flew, noting some months later, “Unlike the children of other presidents who have to retrace with extreme effort the ancestral roots.”

Bongbong left for the UK on Sept. 4, 1970, and settled well into Worth. After three months, he was back in Manila for Christmas. Fr. Bernard, one of his teachers, reported to Marcos: “Bongbong has been lazy but well adjusted. He makes believe he knows but he does not. In History he has been observed to be ‘flippant’ and his ideas not well thought out.” Nevertheless, upon his return, significant improvements in Bongbong are dutifully noted most notable being: “he is more orderly in his habits, takes care of his room which used to be untidy before he went to Worth and seems shy with the girls.” To the family’s surprise it was reported that the housemaster found Bongbong’s locker so neat it was made an example to the other boys. Marcos added:

“He had lost his darkness and he looked unbelievably handsome … He had acquired some kind of an English accent and the peculiarly English terms like ‘frightful,’ ‘dreadful,’ ‘chap’ … he was changed much deeper than mere accent or adeptness in the English language. He now placed greater importance on his academics than on sports. He casually announced that he would have to give up his judo as it cuts into his study and work on physics. And he bragged of his being told by his master that they would recommend his elevation or acceleration in physics. He also bragged that he was third in mathematics in a class of 120.

“Imelda and I are agreed that we made the right decision in sending him to England. And we remembered our fears of friends as well as enemies spoiling him, of drug-addiction, of leftists, threats of kidnapping and the fate of Presidents’ sons in the Philippine society that gave them no incentive for excellence.

“… I noticed that Imelda hugged him longer than usual as I did. And she whispered to me, ‘You were right, we have lost a child. He is now turning into a man. We can no longer baby him.’ I answered, ‘We will just have to have another child to baby!’”

It is unfair to assume that Bongbong has not changed since he was a boy in 1970 to the adult in 2022 and his father’s remarks should be taken in proper context. There is more to these diaries than Bongbong. Much in the 1970-1973 entries clarify the road to martial law. A caveat though, the diaries are self-referential and self-serving. Those looking for intimate revelations on Dovie Beams, for example, will be sorely disappointed. The diaries are a front-row seat into history. Going over Marcos’ scrawl is as fascinating and scary as looking at a cobra safely caged in an aquarium.