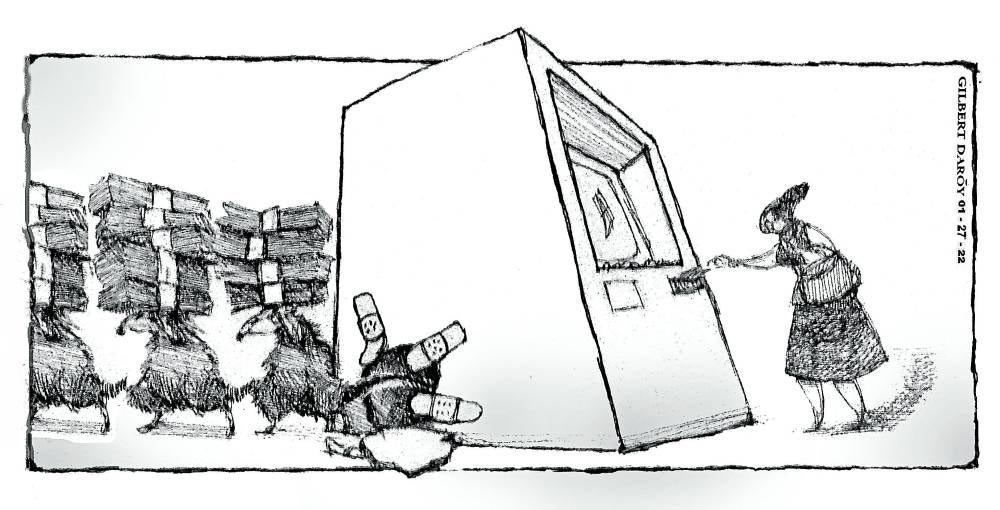 The country’s banking sector was jolted by the revelation earlier this week by the Teachers’ Dignity Coalition that more than 11 anguished public school teachers saw their accounts with Land Bank of the Philippines drained of between P26,000 and P121,000 each, in yet another painful incident of cybercrime.

The group claimed that the teachers’ Landbank accounts had been hacked, which means that the bank’s online banking security systems had been breached. Landbank, however, denied any hacking incident and maintained that its systems were secure.

What happened, the bank said, was that the teachers’ accounts were compromised through a phishing scam, where personal information was stolen to access their accounts through the opening, for instance, of spurious email messages.

Landbank referred to the incidents with the teachers as “isolated cases” and reminded its customers to protect themselves against phishing and other online banking fraud by refraining from opening suspicious emails, links, and attachments and sharing account and personal information.

And yet from 11, there are now 20 public school teachers and personnel of the Department of Education who reported unauthorized transactions on their payroll accounts, prompting Justice Secretary Menardo Guevarra to order the National Bureau of Investigation (NBI) to look into their specific complaints as well as phishing of bank accounts on a broader scale.

The NBI is coming off a big win after arresting last week three Filipinos and two Nigerians—the Mark Nagoyo Heist Group—who were suspected of siphoning in December last year money from the accounts of around 700 unsuspecting depositors of BDO Unibank.

These incidents showed that indeed, placing the burden of securing the accounts squarely on the customers is unfair and just won’t do anymore.

The list of fraudulent transactions continues to grow as more Filipinos increasingly rely on online banking amid the COVID-19 pandemic.

With increased digital adoption comes increased criminal activity online thus the imperative for the banks and financial institutions to fortify their defenses. 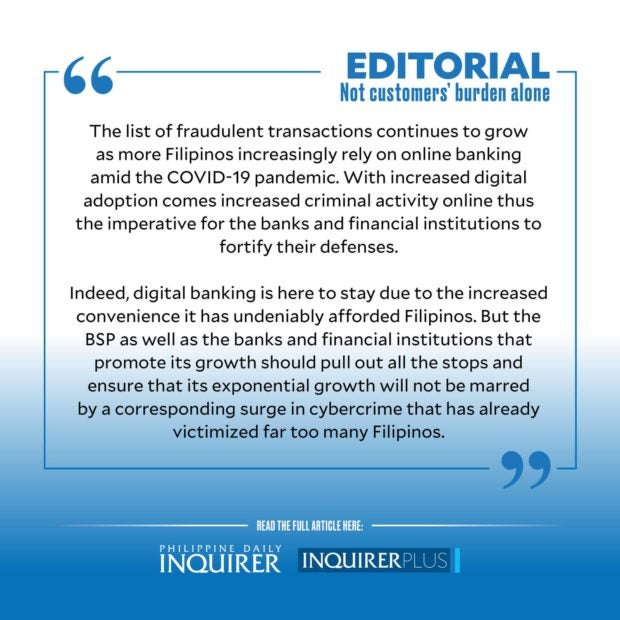 “Hackers and scammers took advantage of the digital infrastructure and consumer vulnerability to perpetrate crime. Based on BSP monitoring, the increased use by the public of digital financial services has given rise to a wave of cyber and financial crimes,” explained BSP Gov. Benjamin Diokno.

Diokno noted that in 2020, at the height of the COVID-19 pandemic, hacking and other malware attacks surged by a whopping 2,324 percent from 2019, while phishing and similar schemes surged by 302 percent.

Clearly, not all of these can be blamed on customers unknowingly sharing their information with others. Rather, they point to weaknesses that banks and financial institutions must immediately address, especially with cybercriminals growing bolder and more sophisticated in their methods.

“Our people’s hard-earned money entrusted in banks must at all times be secure,” Poe said.

The BSP, meanwhile, is pinning its hopes on the passage of the Financial Consumer Protection Act (FCP), which would empower financial regulators such as the BSP, the Insurance Commission, and the Securities and Exchange Commission to resolve cases involving monetary claims.

“The enactment of the FCP Act is envisioned to provide an armor of protection to all financial consumers,” Diokno said during a recent Senate hearing. At the same time, to ease Filipinos’ concerns about online banking, the BSP is conducting its own investigation into the recent spate of fraudulent online transactions, with the task force tasked to formulate recommendations to prevent similar incidents from happening.

Indeed, digital banking is here to stay due to the increased convenience it has undeniably afforded Filipinos.

But the BSP as well as the banks and financial institutions that promote its growth should pull out all the stops and ensure that its exponential growth will not be marred by a corresponding surge in cybercrime that has already victimized far too many Filipinos.