Where is the outrage? | Inquirer Opinion
Close
menu
search

Where is the outrage? 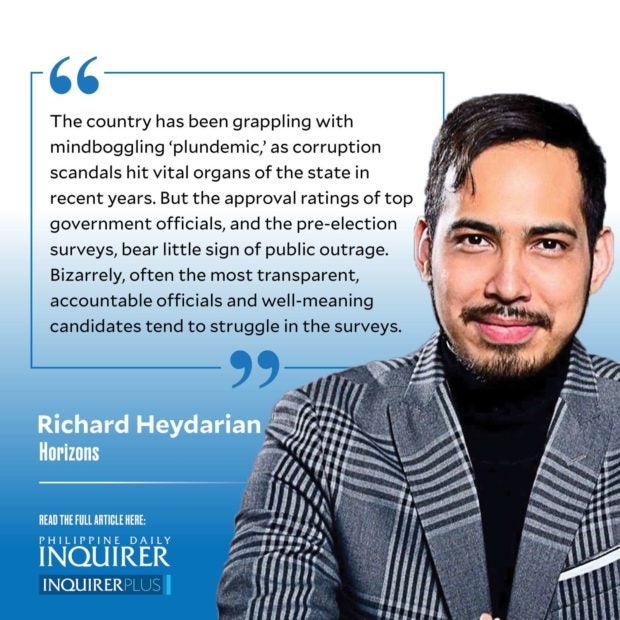 Do not suppose that I have come to bring peace to the earth. I did not come to bring peace, but a sword,” says Jesus (Matthew 10:34) in one of the most powerful verses in the Bible. As prominent religious scholars from Karen Armstrong to Reza Aslan have pointed out throughout the decades, social justice has been a pivotal element of all great religions, including Christianity.

To have faith, and to truly love, is to help bring about a more just and equitable world. This means speaking out against oppression, protecting the poor and vulnerable from abuse, and standing up to tyranny. This is why a man of faith such as Martin Luther King Jr. once memorably said, “Our lives begin to end the day we become silent about things that matter.”

Undoubtedly, the past week was truly eventful—and a revealing episode about the state of our country, especially as the ancien régime inches ever closer to fully reclaiming the reins of power.

The most wrenching was the travails of octogenarian Leonardo Flores, affectionately known as “Lolo Narding.” The mug shots of Lolo Narding, dazed and frail before cameras, were one of the most heartbreaking images in recent memory.

It heartens to know that countless concerned citizens, including law enforcers, reportedly helped Lolo Narding’s family to raise the bail money. But did they really have to arrest him, to begin with? Did he have to be dragged into the precinct, under humiliating circumstances, based on the flimsiest charges? Did he have to reportedly spend days, if not a whole week, before national headlines mobilized pressure on relevant authorities to recognize his full humanity?

Notwithstanding the outpouring of nationwide sympathy, which reflects the inherent kindness of the Filipino soul, this incident is a clear manifestation of an unjust and callous system, where the poor and vulnerable are legally harassed on the thinnest of allegations. Sadly, Lolo Narding’s case is likely not an isolated case, but instead a painful reminder of a more fundamental crisis in our society.

And as much as my heart aches for the Lolo Nardings of this world, who deserve our full support beyond news cycles, my soul cries for thousands of victims of extrajudicial killings in recent years. I often ask myself: Where is the outrage? Why the relatively muted public sympathy for the victims and the families?

After all, surveys by Social Weather Stations have consistently shown that up to nine out of 10 Filipinos want drug “suspects” kept alive. So, is it fear? But the incumbent is in his twilight months already. And besides, fear hasn’t stopped hundreds of thousands of conscientious citizens from challenging the horrific acts and abuses of the most repressive regimes in the world.

Filipino voters often complain about the impunity of the rich, the abuses of “oligarchs,” and endemic corruption in the government. According to the 2020 Global Corruption Barometer Asia survey, 86 percent of respondents identified corruption as a major problem in the government.

In fact, the country has been grappling with mindboggling “plundemic,” as corruption scandals hit vital organs of the state in recent years. But the approval ratings of top government officials, and the pre-election surveys, bear little sign of public outrage. Bizarrely, often the most transparent, accountable officials and well-meaning candidates tend to struggle in the surveys.

This week, we also saw a leading presidential candidate’s camp openly gaslighting one of the country’s leading journalists, while skipping an important presidential election interview episode. But the presidency is a serious job, and we need a serious journalist to speak truth to power.

Unwilling to face proper scrutiny, our traditional politicians are tagging independent journalists as “biased,” while coddling propagandist “bloggers,” entertainment talk shows, and, at times, even brazen purveyors of fake news. How can we have a democracy when real journalism is seamlessly slandered and belittled? Where is the outrage?

The list is long, but even more dispiriting are those who, either out of self-interest or mindless partisanship, choose to rationalize the shenanigans and impunity of the worst of oligarchs in the name of political “change” and national “revival.” As the Book of Proverbs (17:15) put it, “He who justifies the wicked, and he who condemns the just, both of them alike are an abomination to the Lord.”