‘Fellow columnists and other fools’ 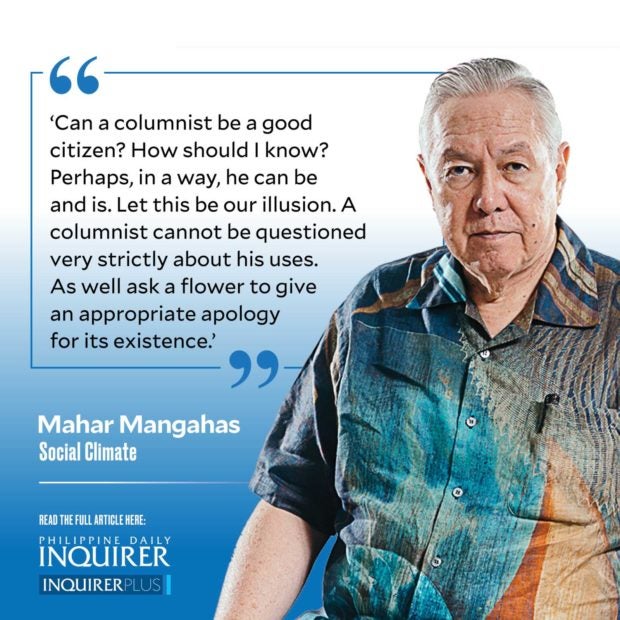 My excuse for today’s crib from my father, Federico Mangahas (9/6/1904-1/19/1979) is that it was his death-day recently—the day churches traditionally set as a saint’s feast day, on the theory that it marks entry to heaven.

“The columnist … observes because he can’t help it. In a group of people you will always find one who notices things and subsequently makes striking remarks about them. If he is healthy and admired, his remarks may be penetrating and perhaps kind. If he has a poor digestion, his remarks are likely to be truthful and cruel. …

“A columnist is also a human being. He must live, to complete his intellectual equipment. He must do things, have contacts, expose himself to the thought and the life about him. He must eat, be sick like other people, and find either experience as interesting as his contemplation of the stars or of the folly of his neighbor next door.

“There are some elementary requirements as to personal character. He is supposed to have courage. He has the courage to look at himself. He indulges in personal illusions to the minimum; and when he does have some illusions, he knows them to be illusions. Thus, he knows when he is being foolish or ignorant on a subject and is accordingly ready to say so. He looks at the world with as much candor and does not think himself beneath his senator in realizing that certain things may be absurd, including his senator.

“He is supposed to have honesty … I will say this: a good deal of our sorrow in this direction is due to our unwillingness or inability to make a distinction between irony and insincerity. The columnist is sincere, even in his insincerities. …

“He may also be charged with charity, kindness, or at worst, a generous measure of good manners. He is not supposed to be unnecessarily angry when the neighbors and the enemies do not behave like angels. … When you are indignant, think that you may also need love, tenderness, understanding. …

“It is the singular privilege of the columnist to talk about anything, including nothing. The subjects of his discourses vary from rogues to royalty, from deities to the peculiar humors of his digestion. Nothing is too trivial and nothing is too important. … After all, whatever he talks about, it is only himself he exposes and gives away, and not the universe.

“The columnist is very personal. His column, like the familiar essay, is definitely an organ of personality. The interest of the column varies with the interestingness of the person writing it. But while he is personal, he is not, like the average politician, a special dealer in personalities.

“He makes no claim to infallibility. His judgments, even where he is most sure, are tentative, provisional. He leaves them open to revision. Anybody may propose amendments.

“He is hospitable to all faiths, while keeping his own or accepting none; he is tolerant of all people, including fellow columnists and other fools; he is free to suspect that his neighbors may be right once in a while; he realizes there is no cause so bad but will have its rational and even reliable defenders, and there is no institution so good but will have its honest detractors.

“While personal in his point of view, he achieves a lofty indifference to his personal fate. He can sign his death warrant and praise the Lord that he is relieved of the responsibility of living forever. Irresponsible in many ways, he stands responsible for his irresponsibility.

“His manner must necessarily follow the personal nature of his point of view. Nowhere is the style so much the man. Now he is intimate, now he is distant; now matter-of-fact, now elaborate—as he chooses to be and as his mood dictates. His primary concern of course is that he be interesting, readable, and clear.

“Can a columnist be a good citizen? How should I know? Perhaps, in a way, he can be and is. Let this be our illusion. A columnist cannot be questioned very strictly about his uses. As well ask a flower to give an appropriate apology for its existence.

“What is the moral if he be the warning and example? Nothing, but that life can be a most interesting adventure—even for a columnist—if he does not take himself too seriously. He takes what kindnesses come his way, what dreams of beauty, what visions of redemption, in a world that is not all kindness, not all beauty, not all redemption.”I must thank my father for, inter alia, competency in touch typing and proofreading, diligence in watering plants, and personal history for a forthcoming column on child labor.